Wonderful Bohol Chocolate Hills
May your visit be happy & sweet! 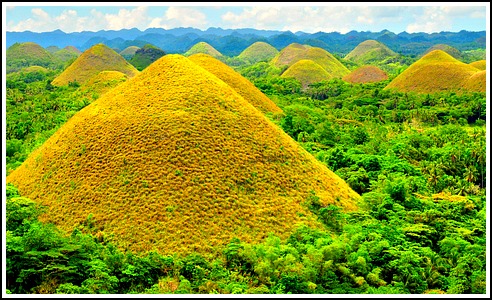 Chocolate Hills of Bohol is the only one of its kind in the whole wide world. Yes, they are not chocolates but they could look like chocolates when the grasses that cover them turn dark brown during summer.

Some say that this ‘chocolate hills’ is the inspiration behind the famous chocolate product, “chocolates kisses”, which is well-known everywhere.

These unusual geological formation of huge mounds number to at least 1,260. They are located in Bohol Province, Visayas, Philippines. They blanketed over an area of more than fifty square kilometers. Each of them is covered with mostly green grasses, while some with trees and other sorts of tropical plants.

These hills are scattered mostly in three towns of Bohol – Carmen, Batuan, and Sagbayan. Reaching these amazing natural wonders is not hard to do (details will be explained below).

These conical and almost symmetrical shape mounds are… 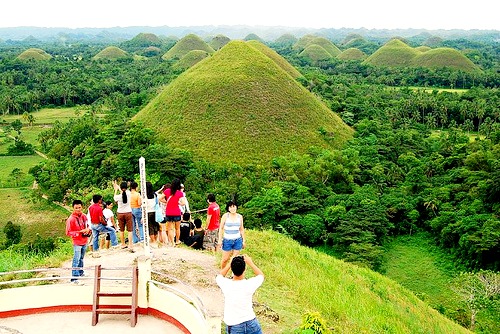 The “Chocolate Hills of Bohol”, as we call it in a collective term, is not only famous as a tourist attraction, but also one of the finest natural attractions in the country. Due to its natural beauty, coupled with its almost mysterious origin, it has been declared the country’s third National Geological Monument and endorsed to be listed at UNESCO World Heritage.

For quite some time now, the hills are under the protection of National Integrated Protected Areas System (NIPAS) policy of the Philippine government. NIPAS is an environmental law that aims to protect and preserve special areas due to their wealth of biodiversity and/or their degrading flora and fauna health. 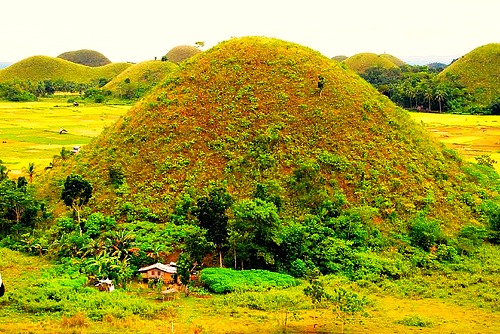 For a bit of scientific or theoretical explanation, these mounds and hills are thought to be composed of the Late Pliocene to Early Pleistocene marine limestone. The limestone should be containing the fossils of marine corals, mollusks, algae, and all such tongue-twister words not included here (Wikipedia).

The chocolate hills’ present form is theorized to be caused when the limestone dissolved through rainfall, erosion, and other natural elements that shaped them after they were being lifted up by some tectonic movements of the earth’s crust. Whew!

Well, if you have better ideas or theory regarding their origin, please share it to us below, or, write a hundred words about your thoughts. Seriously!

Now, for the fiction one…

There are many legends being told about the origin of Bohol Chocolate Hills. However, only a couple of them will be related to you, here.

The first one is about a fierce feud between two giants. These two inhabitants of Bohol, once upon a time, had a fight that lasted for days using huge rocks, boulders, and anything gigantic they could find. After getting exhausted they both fell asleep and became friends again! All those materials they used as weapons became the hills with various sizes.

The second one is about a giant ‘carabao’ (a water buffalo common in Asia, usually with dark or black color). One day, this giant beast plagued a village by consuming and destroying the villagers’ crops. Having discovered what happened, the villagers devised a plan to spoil the beast’s stomach to stop it from destroying all the remaining crops. Surely, they succeeded and the carabao left the village. However, they somehow regretted for upsetting the beast’s stomach. The giant carabao left its dung (crap!) all over their village forming to what we call now the ‘chocolate hills’.

My favorite story, when I was little, is about the two huge beings (‘higanti’ in Bisayan) that lived on Bohol Island who survived by making cone-shaped food and dry them under the sun to turn brown. But one day, the sun did appear not only for a day but for many months. So disheartened, the giants left the island. However, later on the sun rose again and turned the cone-shaped food into brown chocolates, but the giants never returned to eat them!

To accommodate tourists, two of the more than thousand hills have been developed into resorts. One of them, in Carmen Town of Barangay Buenos Aires, is called the Chocolate Hills Complex. The latest developed one is called the Sagbayan Peak, which is located in Sagbayan Town.

The Chocolate Hills Complex is established with visitors’ facilities including: restaurant, hotel, swimming pool, observation deck, and more. This particular hill is being picked for this end since it is one of the highest peak and one that gives a good panoramic view of the other hundred hills.

A disadvantage for some… there are 214 steps you have to climb to in order to reach the observation deck. However, if you can make it, you’ll have a 360-degree view of the whole area as your prize.

The “Sagbayan Peak”, on the other hand, can also provide you a good view of the Chocolate Hills. The other advantage of this elevated ridge deck is that you can have a view of Cebu Island, which is separated by the blue sea. It is a 5-hectare mountaintop resort and relaxation center.

Getting to the Chocolate Hills

Tagbilaran City of Bohol has an airport that accommodates domestic flights. Cebu Pacific and Philippine Airlines have daily flight schedules to this island.
The city government has been working to improve Tagbilaran Airport’s facilities so as to accommodate bigger aircrafts.

Another way is by flying from anywhere in the world to Cebu (Mactan Airport), then take a boat to Bohol Provincial Island, a few hours in the sea with dolphins and blue ocean.

You can take ships or boats from any point in the Philippines that frequent Bohol (click here for the Shipping Companies page!). I’m sure yachts in Cebu also travel to Bohol Province.

When you reach Tagbilaran City, the capital city of Bohol, you may proceed to Dao, where an integrated bus terminal is located. The buses will take you to most of the towns in this province. If you prefer, you can take a rental car, van, jeepney, or any vehicle (motorbikes, mountain bikes, etc.).

The Chocolate Hills Complex is about 55 kilometers from the city, while Sagbayan Peak is about 75 kilometers from Tagbilaran City. Although it’s not close, you may enjoy your ride by taking photos at the scenic environment or the sea. Bohol is clean and not polluted, so just relax!

That’s all folks! Wish you all the best on that chocolate-filled island.

Don’t forget to drop us a line of your experiences there!