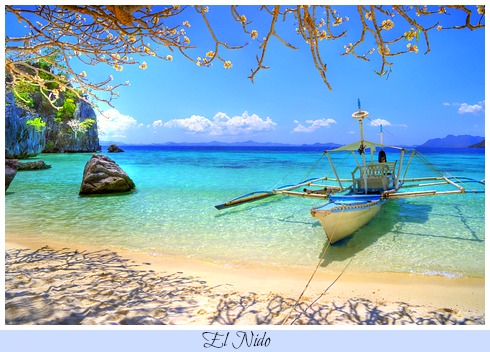 El Nido (“nest” in Spanish) is its rightful name since it is the 'perfect' abode to rest and be refreshed.

This special place has been said to have the “Best Beach and Island” destination in the country due to its “extraordinary natural splendor and ecosystem” (CNNGo).

Puerto Princesa, Palawan’s capital, is just about 238 kilometers to this amazing place. Nautically speaking, El Nido is cushioned by Linapacan Straigth in the North, Taytay Municipality in the South, Sulu Sea in the East, and South China Sea in the Western side.

El Nido is a first class municipality whose resources are under the management and protection of Palawan’s provincial government.

In the Southwestern coast of this municipality, Bacuit Bay lays quietly with its unrivaled beauty coveted by lovers of nature.

El Nido boasts its 45 islands and islets each with interesting and unique shapes. The highest peak, reaching up to 2,100 feet above sea level, is at Cadlao Island.

Southwest of Manila, this municipality is just about 420 kilometers and is accessible by a direct daily flight.

The municipality, including Sulu Archipelago, Sabah, and South China Sea, shares Palawan’s geology and is located in the tectonically active and seismically active Sunda Plate (Wikipedia.com). And it is said that the Philippine Mobile Belt in which most of the Philippines belong to is unconnected from Palawan’s plate. Wow! Hopefully, this won’t become an issue of independence and territorial dispute!

Wikipedia explains further that the rocks and limestone of El Nido are related with those found in Vietnam (Ha Long Bay), China (Guilin), and Thailand (Krabi), all of which belonging to Sunda Plate.

The early inhabitants of this area is believed to have been inhabited by early settlers around 22 thousand years ago. The excavated fossils and burial sites uncovered in various caves date back to the Late Neolithic Age.

Chinese traders, who have been doing business with the early settlers of the country, were believed to have been visiting El Nido for its highly priced bird's nest during the Sung Dynasty.

A village named Talindak claim its roots from a Tagbanwa inhabitants. In the 16th century, some claim that migrants from Cuyo Islands also settled in this municipality. Then, in the 19th century, the Spaniards came and settled in the Poblacion and Mabini.

Later, the Spanish settlers renamed the place into Bacuit – where the municipality is located. However, a republic act (RA 1140 in 1954) changed the town’s name into the present El Nido, a name given after the edible nests of swiflets (collocalia fuciphaga) that make nests in the fissure (cracks) of the area’s beautiful and majestic limestone walls or cliffs.

Cadlao Island. It is where the highest peak among Bacuit Bay’s islands – more than 600 meters high. Above all, Cadlao Island is known for its small size secluded beaches, secret lagoons, and lush green tropical trees cloaking Cadlao’s mountain.

Cudugnon Cave. Archaeologists discovered and believed that a smaller cavern only accessible via another cavern, is an ancient burial site in the Neolithic period. But, you should be physically fit, at least, in order to crawl in to get inside the interesting cavern. Usually, this is considered as one of the highlights when you take an island-hopping tour arrangement.

Dibuluan Beach Club. This is an interesting beach with low and small island that is just a walking distance to the top for a great view of the Bay. Walking on this beach would could be an interesting experience seeing the coconut trees, bamboo thickets, banana trees, and mangroves at the end. A couple of reefs are available for divers and snorkelers to observe the diverse marine life. Other sports and water activities are, of course, available.

Matinloc Island. The name itself expresses the literal meaning for “beautiful”. Famous to Matinloc Island are the two spectacular snorkeling points: Kalmung Point & Kulasa Beach. If you love secluded places, you can access by snorkeling through a small opening the so-called “Secret Beach”.

All who have visited and explored Palawan Island expressed their admiration and deep intention to return someday and experience again (and again) the island’s natural beauty and tranquility.

Please, enjoy your vacation (or any event). To maintain and improve the mother earth to produce beautiful sites, let’s support any environmental efforts by everyone.

Lagen Island Resort. The resort’s location provides a panoramic view of Bacuit Bay with a dream-like sunset. The sounds of nature and animals that inhabit the majestic limestone cliffs - bedecked with all sorts of wild plants continue reading...

Apulit Island Resort. The resort nestles quietly and conveniently within a cove of a majestic limestone at the background and an expansive white sand beach being washed by seawater filled with tropical and myriad species continue reading...

Do YOU Have Nice Photos of Luzon Places?

Publish & promote YOUR hometown or favorite place. Just describe them or include your story. Let your friends and the whole world know about it. Share it here!