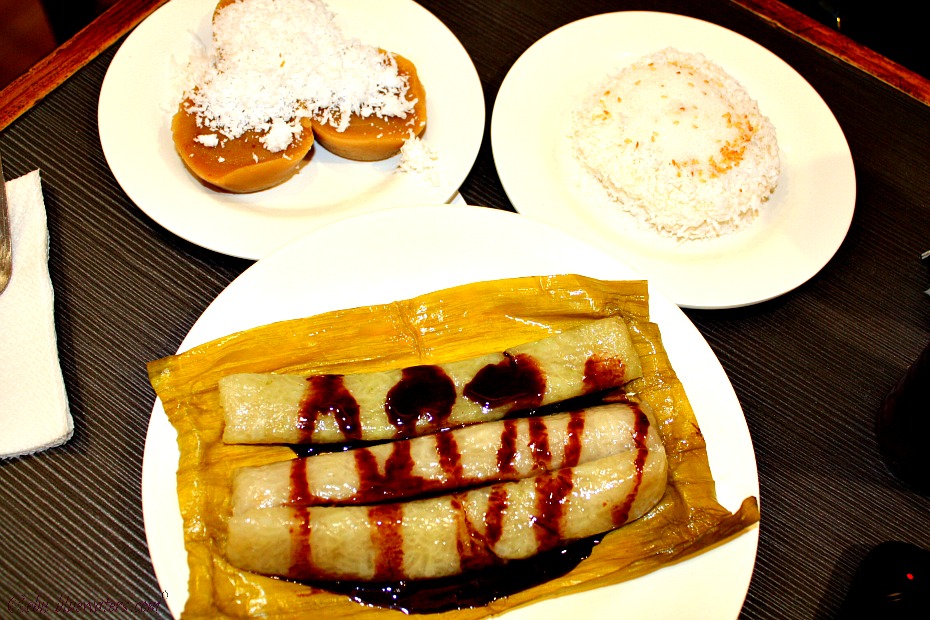 Pinoy traditional snacks have been tested through time especially when the influx of burgers and other fast foods suddenly became a fad among children and adults alike.

however, being traditional and the fundamental source of nourishment to locals, such food and in-between food recovered its place in the people’s taste buds.

before, you can only find them in street corners, school premises, wet markets and some unlikely places. for being in demand by city people and those living abroad, Pinoy traditional snacks can easily be spotted in huge spaces such as department stores, malls, supermarkets and other extensions.

Well, i don’t want to keep you waiting, let’s go and describe some of them. i only picked the most popular and the mouth-watery ones…

Pinaypay, Maruya – banana fritters
I don’t know why this one comes first on the list. Most probably, I have some unconscious bias that made me pick this one first among many.

Pinaypay or Maruya is a banana fritter. But this is not just any sort of banana. You cannot fry any banana you can meet. It is a banana specie that is usually eaten when cooked (of course you may eat it ripe and raw but the taste is not great).

This banana type is called ‘kardaba’ in my own native tongue and i don’t know how others may call it. Anyhow, you can cook this kardaba into four major ways: fried, boiled (or similar methods), broiled or barbecued.

Pinaypay or Maruya is a deep-fried type of menu. Usually, you can use an ordinary cooking oil (coconut oil in the Philippines) to fry it with its fan-shaped style of cutting. ‘Paypay’ is a literal translation for the English word of ‘fan’.

Turon Spring Roll with banana inside or jackfruit for flavor
Turon Spring Roll is usually composed of banana wrapped inside a thin spring roll wrapper fried. The combination of thinly sliced banana (saba or cardaba) with a slice jackfruit inside the wrapper dusted with brown sugar makes its very palatable to your taste-buds.

Cassava Cake is a bit different from Bibingka Cassava in a sense that the former can be cooked in an over and with ingredients not included in the latter. A cassava cake can be very sweet (contained with condensed milk, sugar and caramel, etc.) while the Bibingka is only mixed with brown sugar. This Bibingka is one of my favorites when I was little! 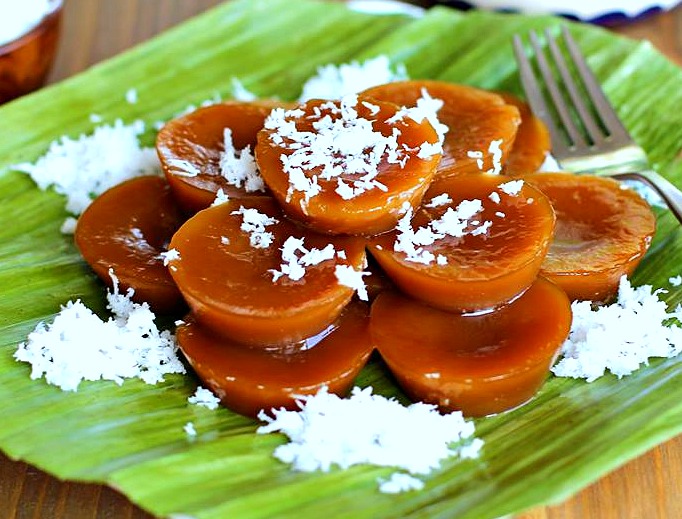 Cuchinta (or kutsinta)
Cuchinta or puto kutsinta is a traditional sort of glutinous rice cake. It is a rice cake that contains no baking soda powder. This very tender jelly-like and round-shaped cake is steamed and served usually with freshly grated coconut meat as toppings. It tastes a lot better when served chilled a bit. It is basically a combination of glutinous rice flour, brown sugar and lye.

Pichi-pichi
I had this during my visit in Cebu with my nephew and niece at SM Mall. Pichi-pichi is a gelatinous dessert or snack made of grated cassava and sugar. It is almost similar with Cuchinta in terms of preparation process and ingredients. It is usually cooked with grated cassava, sugar, lye, buko-pandan essence and some water under a steam. Unlike Cuchinta, Pichi-pichi is wrapped or coated with mature grated coconut meat for additional taste.

Palitaw (sweet rice dumplings)
Palitaw is another tasty traditional glutinous rice cake. As the term suggest, ‘palitaw’ is cooked directly in a boiling water until it is cooked. ‘Palitaw’ means to float in Tagalog (‘palutaw’ in Cebuano and other local language). Again, Palitaw is made of glutinous rice, granulated sugar, grated coconut meat and other ingredients. Usually served cold or chilled.

Puto Cheese
Puto Cheese (or steamed rice cake with cheese) is a derivative of the traditional ‘puto’ which is usually prepared by steaming glutinous rice. The difference, obviously, is that this Puto Cheese is prepared with cheese topping among other combinations. Some serves Puto Cheese with grated coconut topping, and it is becoming a custom for many to eat it with dinuguan or pork blood stew – the combination of which really tastes fanstastic!

Biko
Biko is the most traditional Filipino food and the easiest rice cake to prepare. It is made of glutinous or sticky rice, coconut milk, and brown sugar (or any sugar). It said it is easy because you just mix at once the glutinous rice, coconut milk, sugar and then cook it over a fire in a pot. Of course, some variations would also taste better – like spreading some condensed milk, grated nuts and coconuts, etc as toppings.

Puto Maya
It is also a glutinous rice cake and almost similar to Biko. The difference between the two is that a Puto Maya taste less sweet but salty. In addition to its special taste and flavor, Puto Maya is usually prepared with ginger juice or the ginger itself. Similar to most of such delicacies, Puto Maya is usually served over a piece green banana leaf. I believe that the fresh banana leaf adds flavor to it.

Binignit
Binignit is one of my favorites since I was little (especially during breaktime in elementary)! Binignit is some sort of a sweet stew, but it doesn’t contain any meat. It is bascially a combination of chopped sweet potatoes (kamote), coconut milk, ripe banana (cardaba or lakatan), and sugar. Variations of Binignit may contain jackfruit meat, sago pearls (starch from a tropical palm stem, center or pith, which are usually round in shape). A simple variation of Binignit is Tabirak, which is simply made of sweet potatoes, coconut milk and sugar.

Budbod
Budbod is a Pinoy traditional rice cake but rolled. It is usually cooked wrapped inside a young banana leaf. Among many variations, basically it is a combination of sticky or glutinous rice, coconut milk and sugar. The banana leaf makes it tastes a lot better, besides being very practical to be easily brought anywhere without usually plates or other containers.

A Budbod goes well with a traditional coffee, ginger tea or hot cacao drink especially in the early morning.

Thank you for reading and enjoying the traditional Filipino snacks featured in this page. These are healthy food and are traditionally not contained with artificial ingredients.

Have a happy and healthy life!