The Way of Life
...habal-habal driving to Campo 7

The Way of Life

This article is a tribute to an ordinary, hardworking man trying to find his means of living.

On one beautiful Sunday, while I was on my way to Campo Siete to see for myself the beauty of Osmeña Reforestation Project in Minglanilla, I got the chance to have an friendly chat with the habal-habal driver whose services I hired for my trip.  Kuya Junior was kind and patient enough responding to my queries as we passed along the various barangays going to Campo Siete.  He in fact educated me on the geography of Talisay.

Kuya Junior is a resident in Campo 4, Barangay Manipis, Talisay City.  He goes every day to the City of Talisay, particularly in Barangay Lagtang, via his motorcycle to start his source of living—habal-habal driving. At exactly 8:00 in the morning, he must be in Lagtang already parking his motorcycle along the street of Tabunok Public Market, ready to transport passengers to Barangay Jaclupan, Campo 1 to Campo 7. He ends his trips at 5:00 in the afternoon. Others, according to him, make their rounds in 24 hours.

His motorcycle can accommodate four passengers, three behind him and one in front of him.  I could just imagine the difficulty in doing that. But then, he confidently recounted that he could manage doing it with ease as time went by mainly because driving is his source of income. 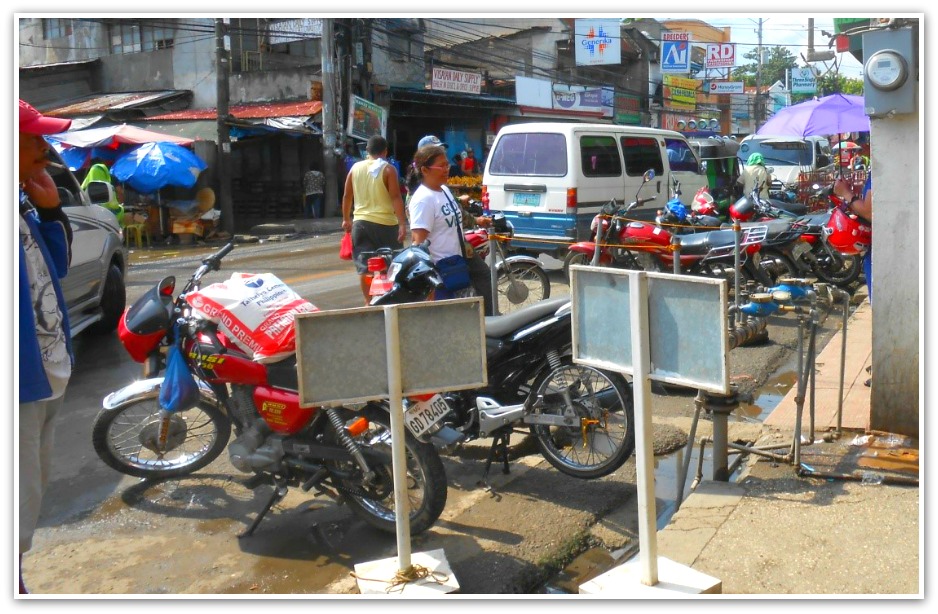 This is the site (photo above) where I met Kuya Junior.  I agreed to a “pakyaw” (Cebuano term for a full round-trip fare in this case) fare of P200 (Philippine Peso), which includes his waiting time, to and from Campo Siete.  This is one of the options to go to that place.   The usual fare per person is P40. If he has four passengers, then he gets P160 per trip.

For the multicab fare, up to Barangay Jaclupan route, a passenger pays P10.00. But then, the multicabs do not leave until it is full. In Cebuano lingo, we call it “alas puno.”  It goes to say there is no specific time when the multicab leaves because it departs when it is only fully loaded.  So that, when time is of the essence, taking a habal-habal is more appropriate and convenient an option to get to your desired place in one of those barangays. 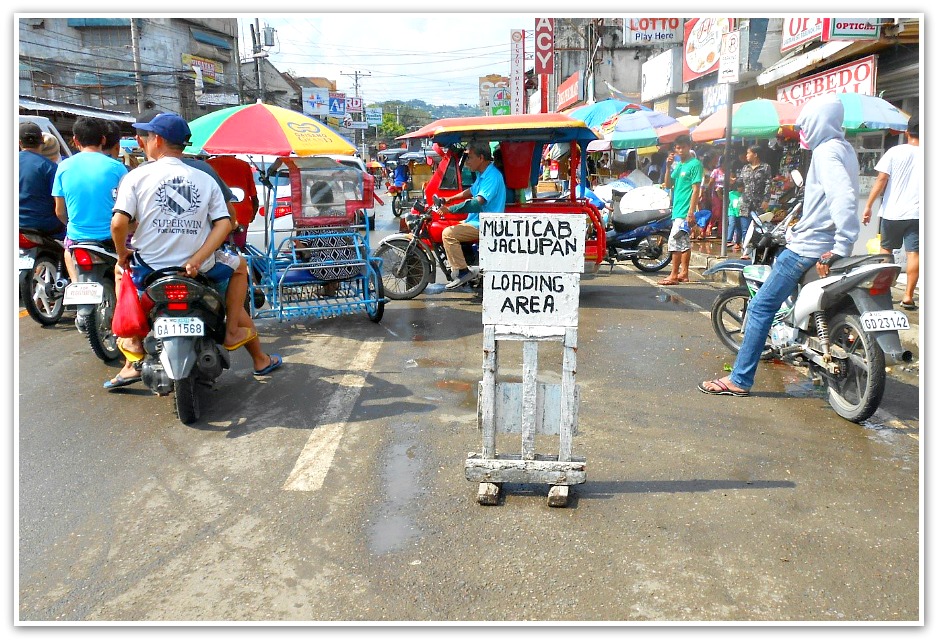 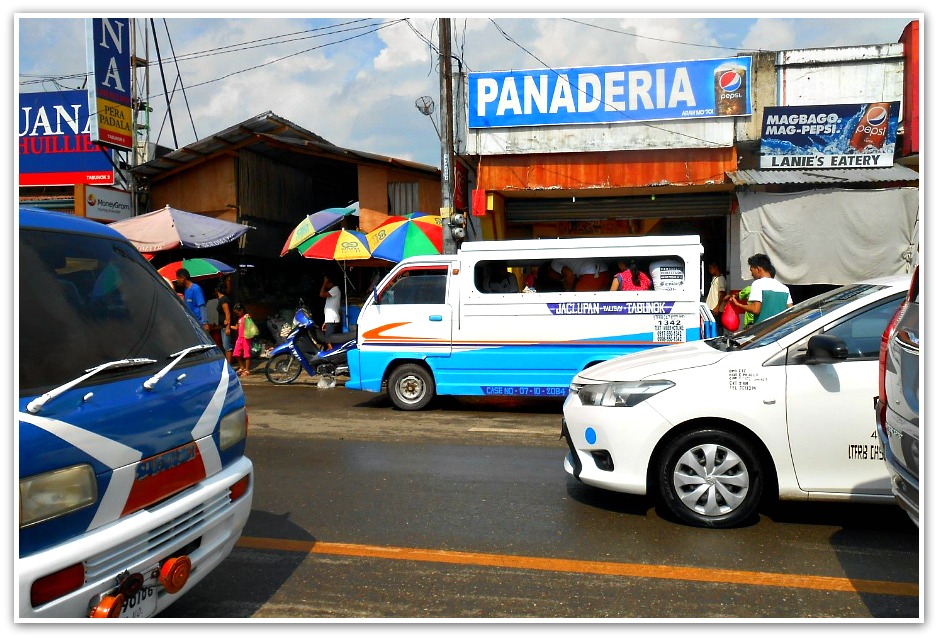 This viewed street is the loading area for multicabs (small jeepneys) bound for Brgy. Jaclupan, Campo Uno, Dos, Tres, Cuatro, Cinco, Seis and Siete.  According to him, these multicabs can go as far as Brgy. Jaclupan only. Thereafter, no other means of transport is available but habal-habal.  As far as I can recall, there was a time when Ceres buses or other means of transport used to pass by that route.  But now, the DENR had declared the roads to be non-passable due to the dangers of “rolling stones” and recurring landslides.

Before we went off for our trip, the weather was gloomy and even started to drizzle.  I hesitated for awhile and contemplated whether to push for it or not because I had been earlier warned by the DENR staff that traversing the roads to Campo 7 is quite dangerous during rainy days due to incidence of landslides. But for Kuya Junior, there are no sunny days nor rainy days but only empty tummies.  There is no more dangerous zone for him than to have nothing on the table for his family.

He insisted that we go because he said it was sunny when he left the uplands to drop off a commuter.  In my desire to have something to write, I gave in to my inklings.  So off, we went!  A few meters after we left off, we dropped by at a gasoline station to fuel his motorcycle.  I was thinking hmmm maybe the trip was going to be long.   And a little while after he accelerated, the drizzles turned into heavy and big drops of rain.  Kuya Junior was forced to pull over to the sides to take a shed under a canopy.  Good thing I brought my rain jacket which spared me from being drenched all over. While waiting for the rain to subside, I took a photo of Kuya Junior’s motorcycle. 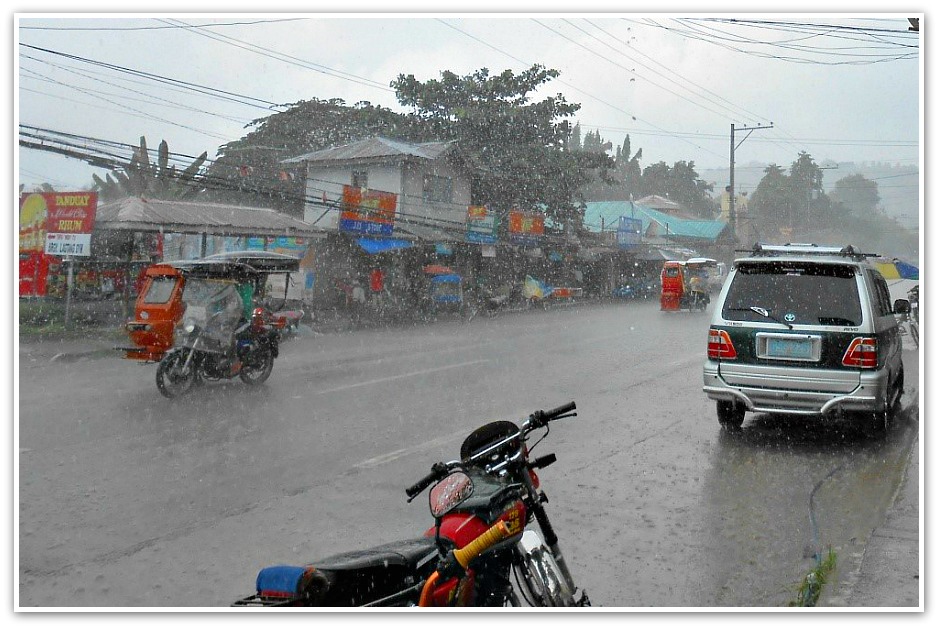 The skies stopped crying after ten to twenty minutes, and Kuya Junior prepared his motorcycle for our adventure. 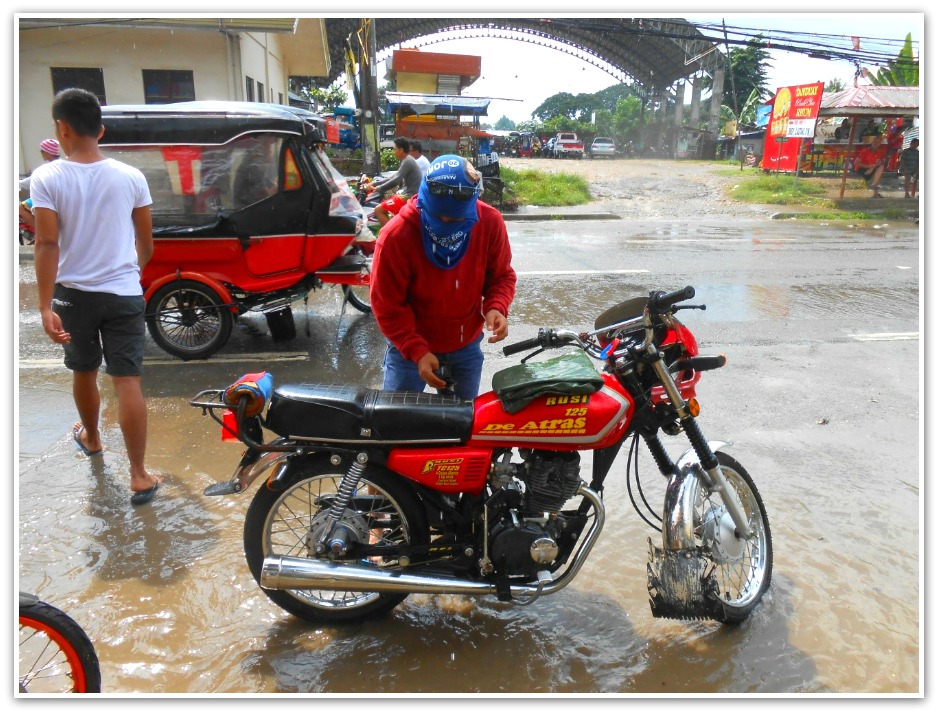 I was already enjoying my ride because the sun was up as we headed our way to #destinationgoal passing along Campo 1. So I took my camera out again to capture the beautiful scenery as we pass by the rocks and evergreen mountains along the roadsides.  I was having fun and excitement because, alas, I had just begun a single step to the long-desired destination, the mini-forest of Cebu. Here are some photos. 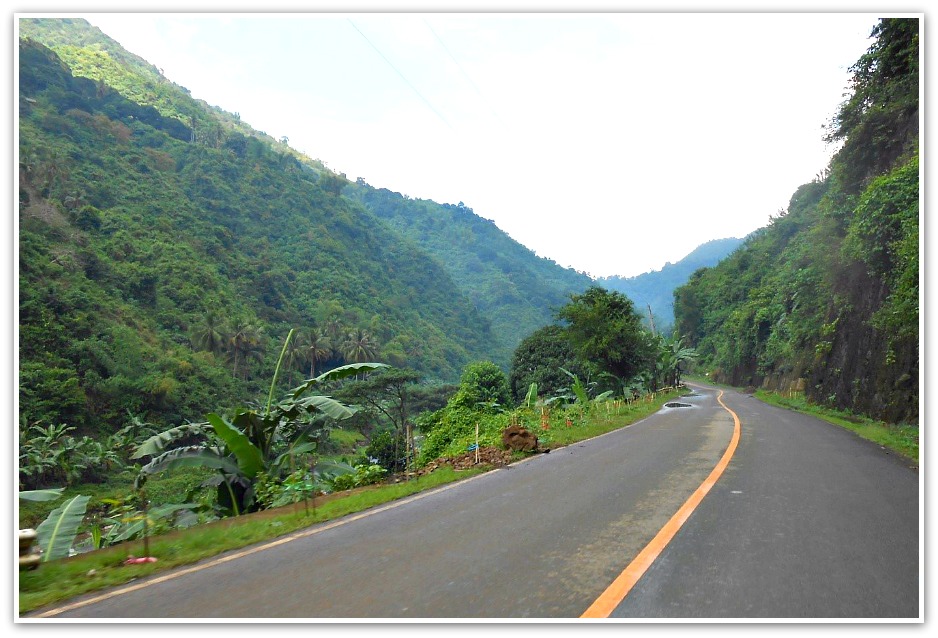 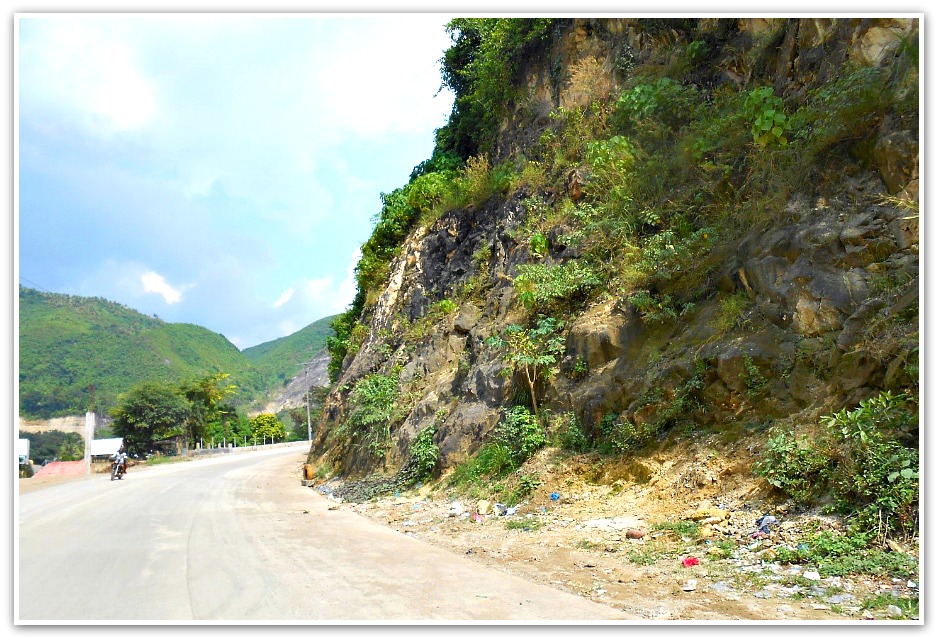 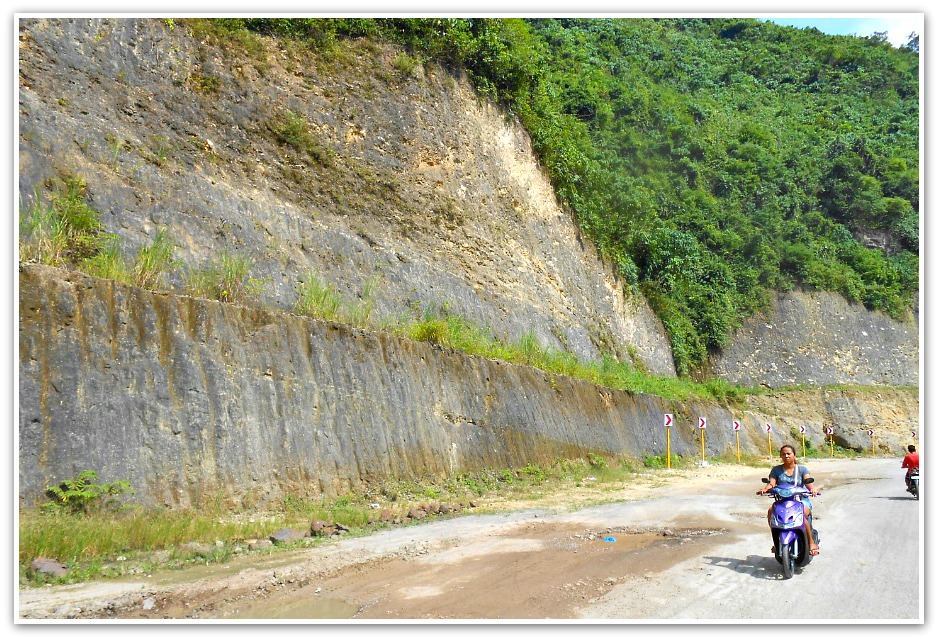 As we further went on with our trip, he relayed to me the dangers he has to hurdle every day. One, during rainy days, the road is muddy and slippery.  He warned me that in going to places like this, it is important that the driver must be familiar with the path or else, it can cost him his life or the lives of his passengers.  There are some very unfortunate and sad cases that travelers did not make it to their respective destinations. 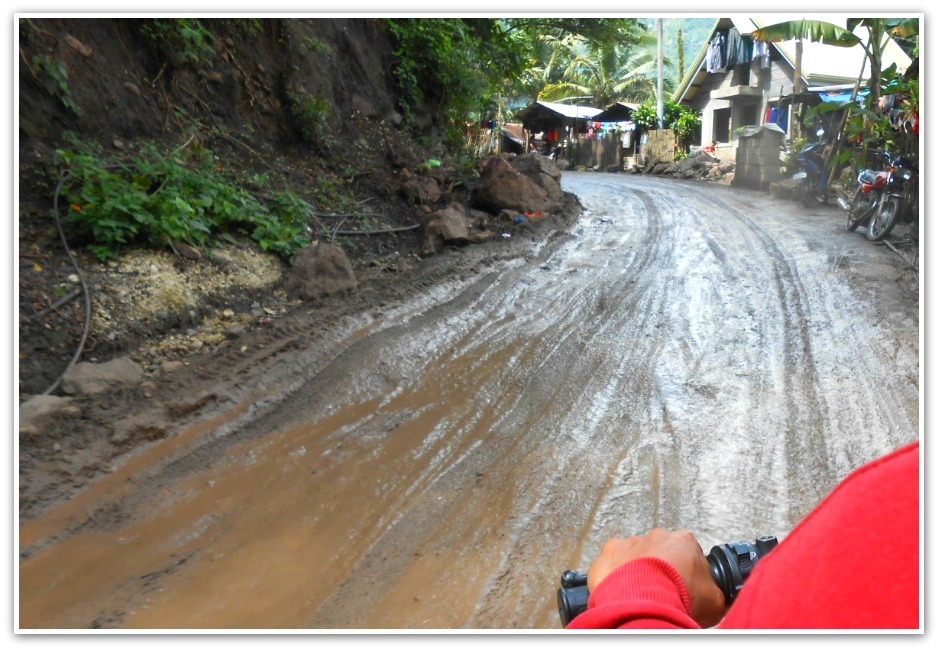 Two, stones, big and small, are rolling from the mountain tops. In this area, I could see big rocks from the top of the mountainsides which, when shaken, would certainly crash any being down the road. 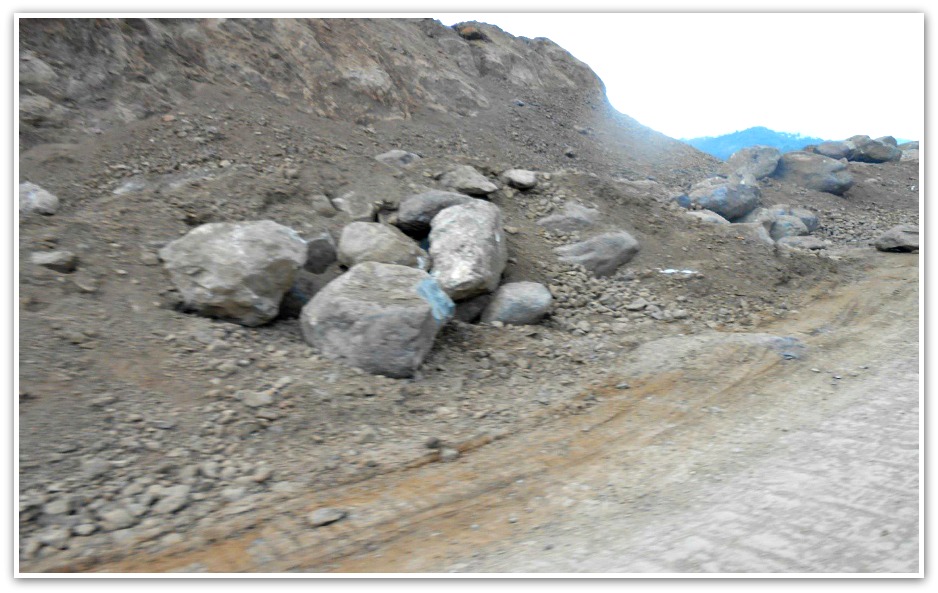 And three, the landslides ... 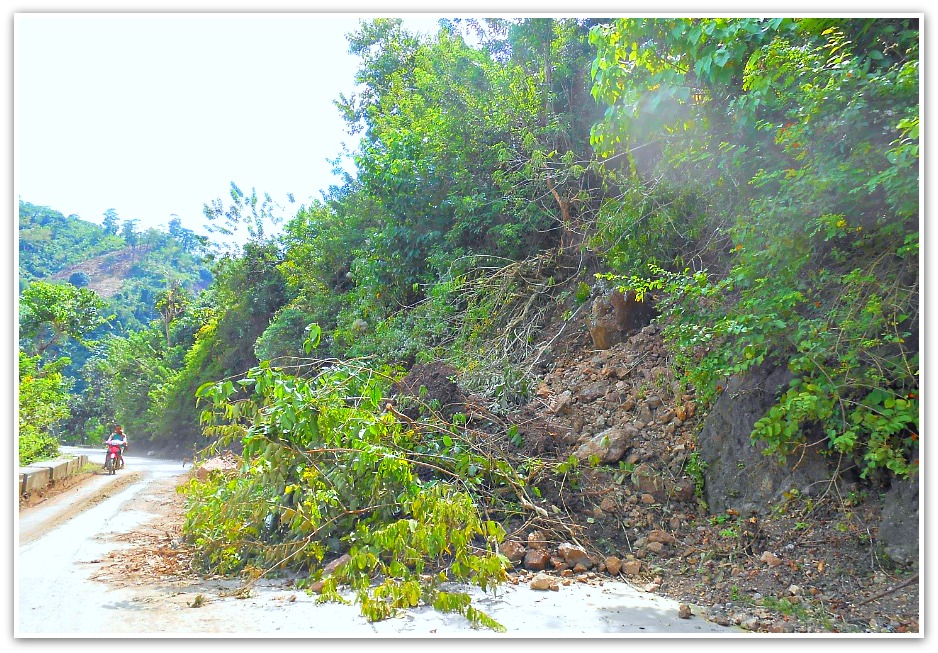 Not all parts are risky though because there are parts of the road that had been asphalted and widened which make driving easy and smooth. The air breeze and the wind that kisses your face is in no doubt free from smog. 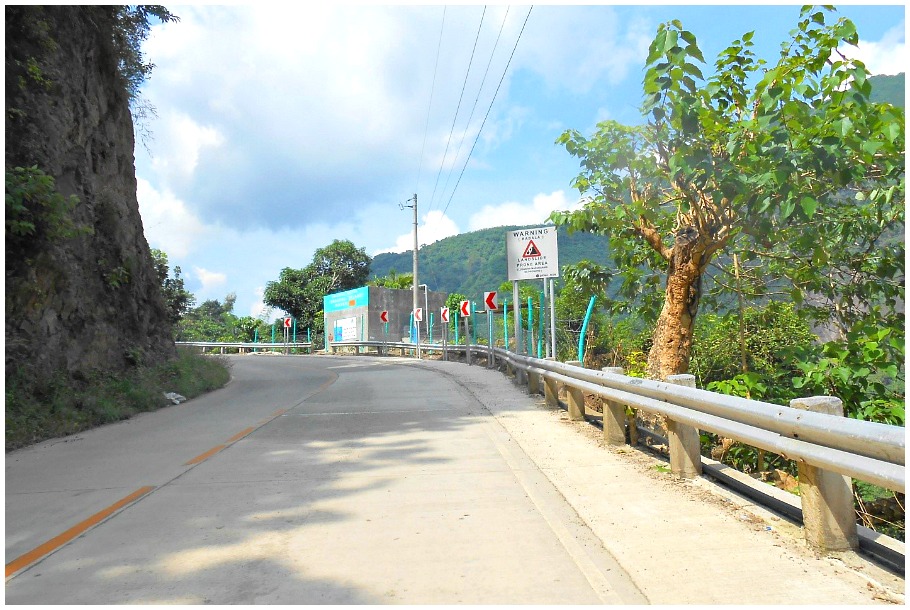 In fact, road widening is ongoing in some barangays. 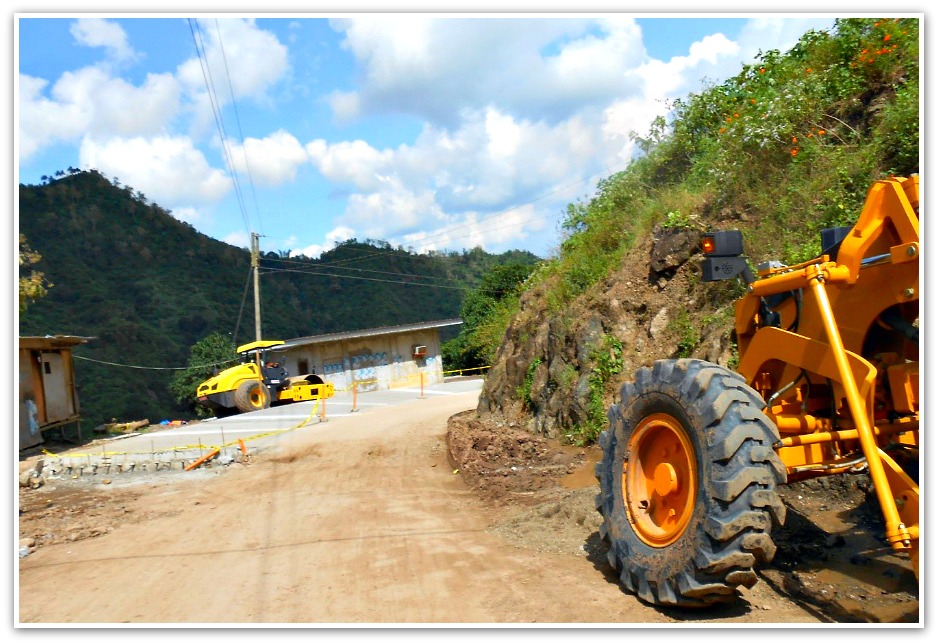 Contractors are also exercising their environmental responsibility by covering some parts of the rocky side of the mountain so as to prevent tiny stones from rolling down towards the highway. 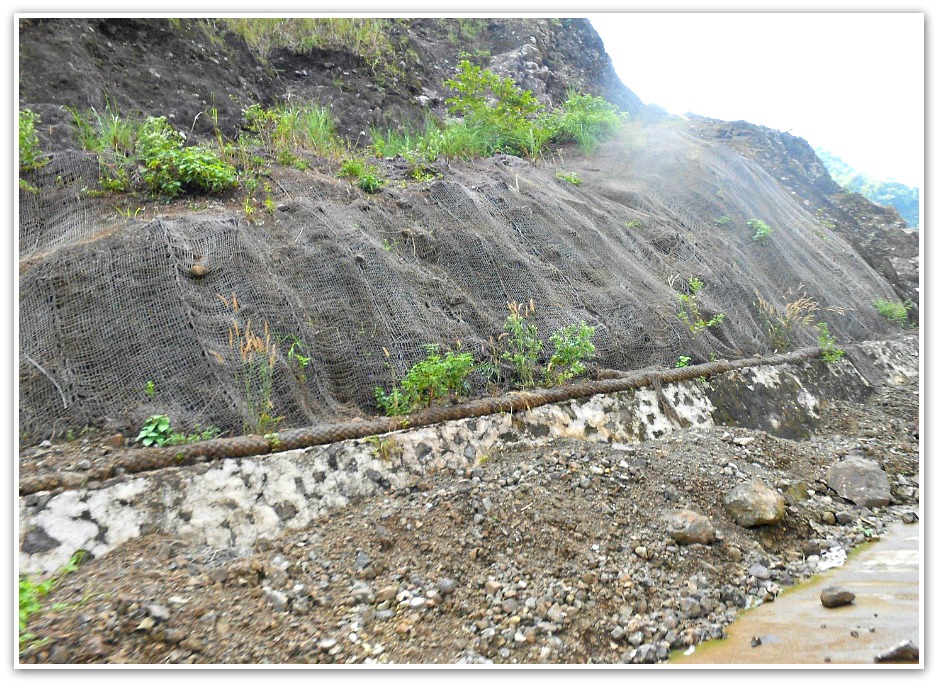 Also, so that these big rocks will not go straight down the highway, the road contractors made it a point to bar them by making a canal to serve as a catch basin.   I thought it is going to be a path for a new tourist spot behind the greens and the browns of mountainsides. 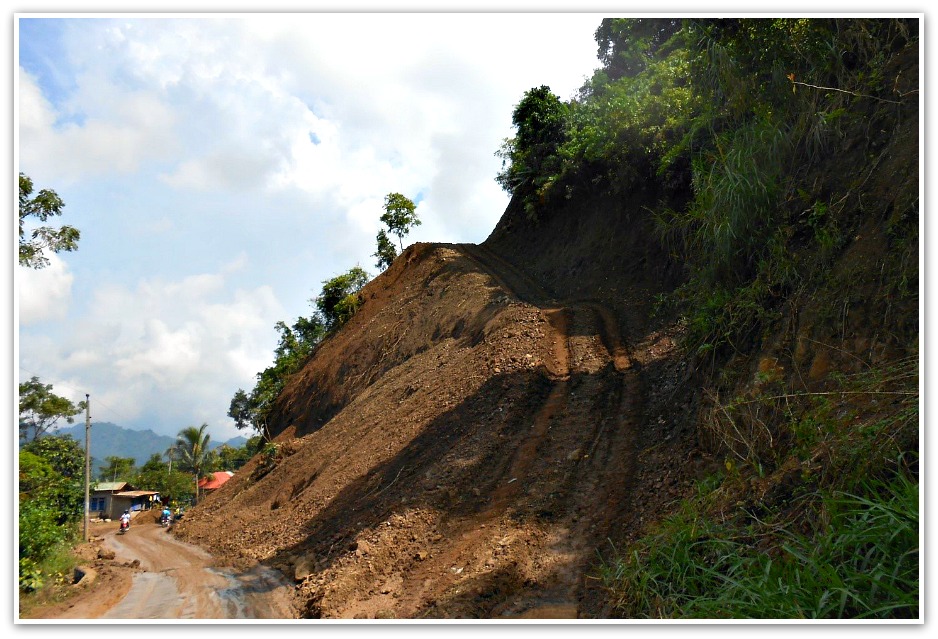 We are now approaching the uplands of Brgy. Manipis which covers the areas of Campo 1 to 6 and Brgy. Jaclupan. 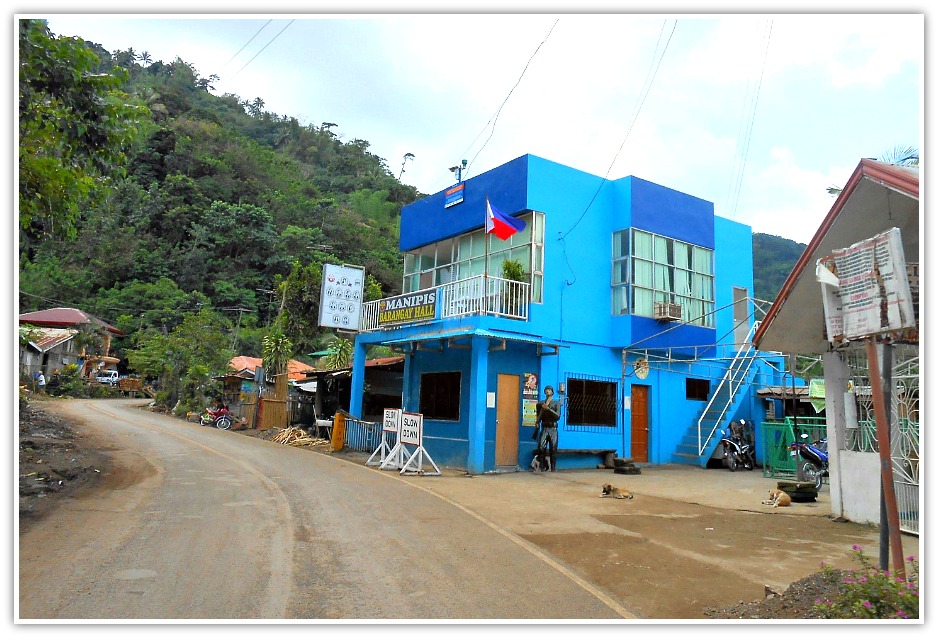 My fear of heights was overcome by the magnificence of God’s creation as my camera caught sight and captured the expansive, natural landscape before my eyes that not taking a photo is inevitable. 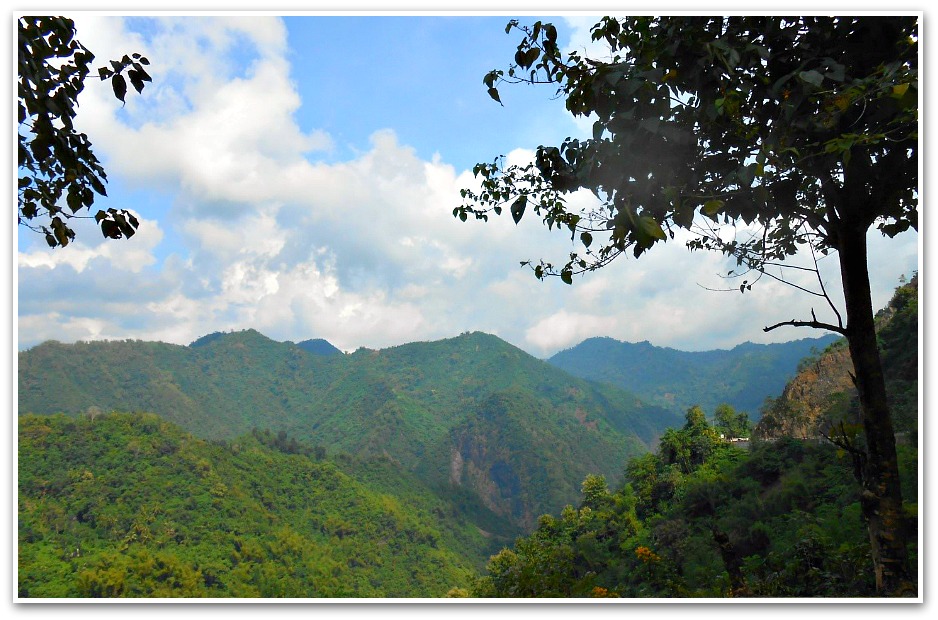 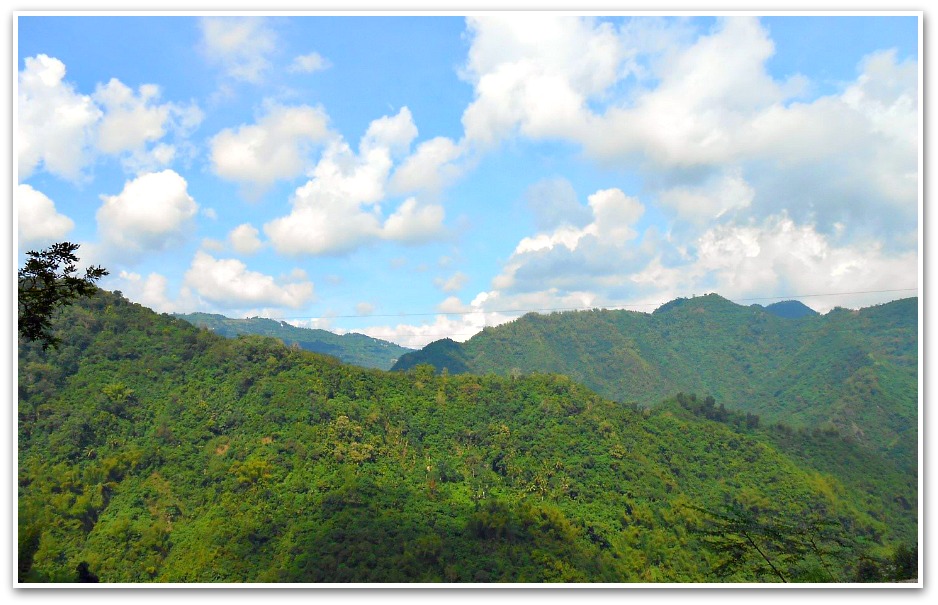 Barangay Manipis used to have a narrow road, as it is called, which makes the trip very dangerous especially at night time. I could just imagine what the habal-habal drivers are faced with in their daily trips in exchange for survival at their own peril. 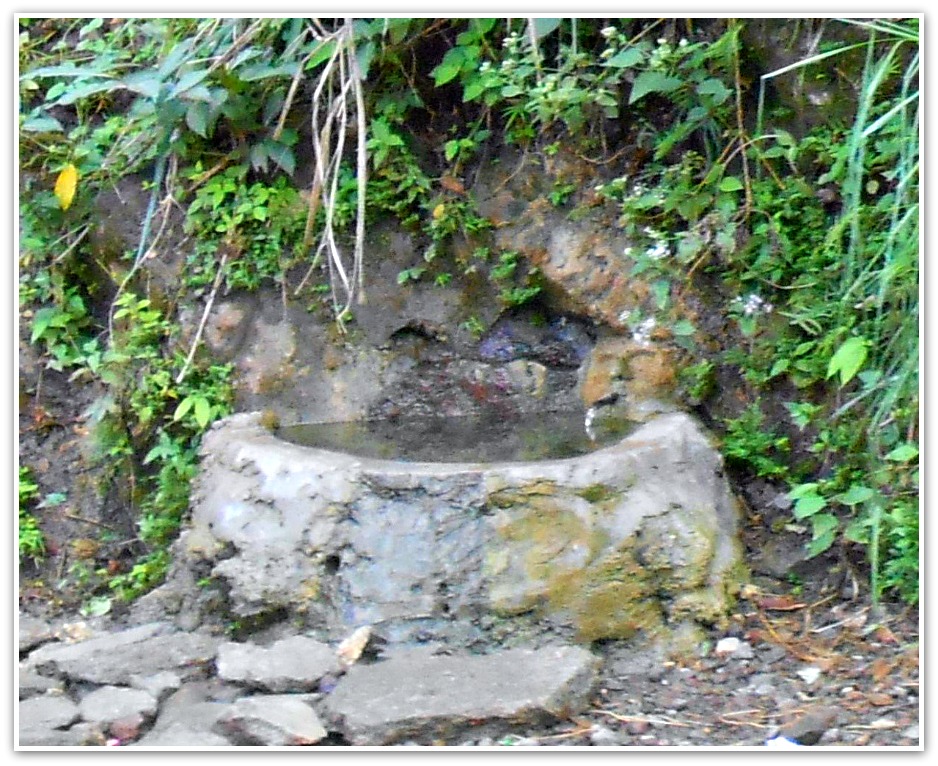 Water is free where Kuya Junior resides. Aside from this site where the source of potable water coming from natural flowing water, they also have a reserve water system provided by the mayor of the City.  Electricity is also available in the area. At least, the local government unit is not remiss in providing the basic necessities of their residents because, after all, they also garnered votes from the residents in these uplands part of Talisay City. 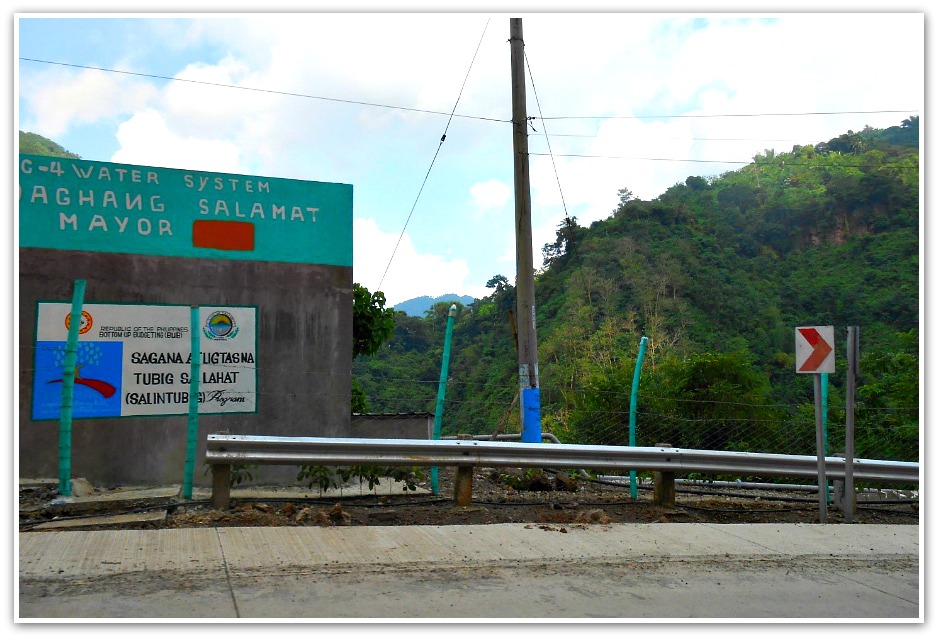 After a day’s tour in the mountain part of Talisay, I cannot thank Kuya Junior enough for his stamina in driving me back and forth to Campo Siete. I thanked him for bringing me safe and sound back to Tabunok where I hired him and for the vital information I gathered from him about the interior barangays of Talisay City. 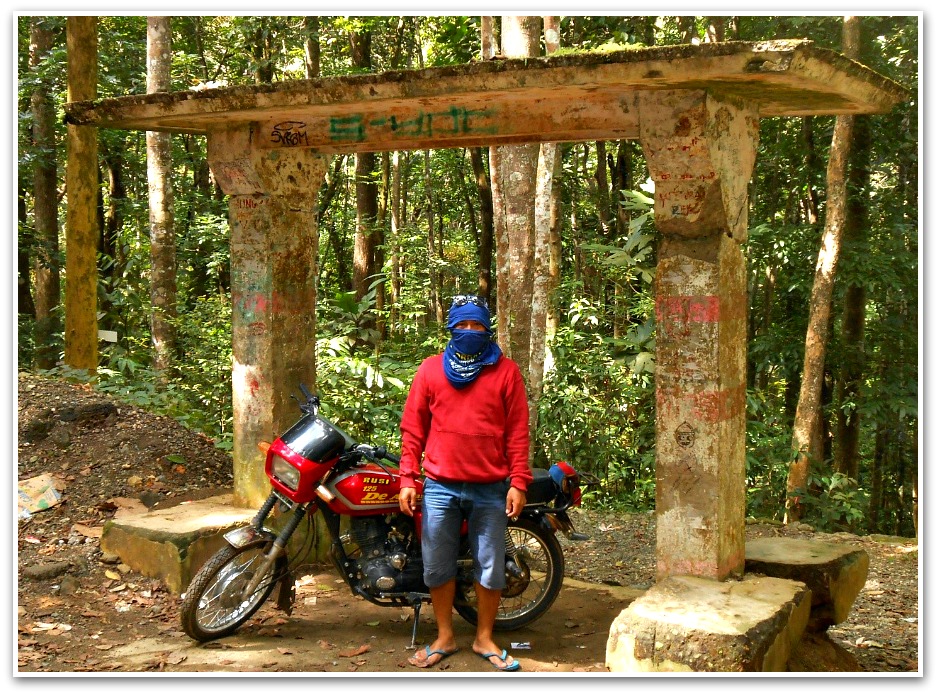 With his ability to drive a long and winding road, his determination to earn P200.00 for a round-trip, the agreed fare of P200.00 is not enough to compensate the goodness in his heart.  He deserved an extra incentive for an honest day’s work. Kudos to you, Kuya Junior!!