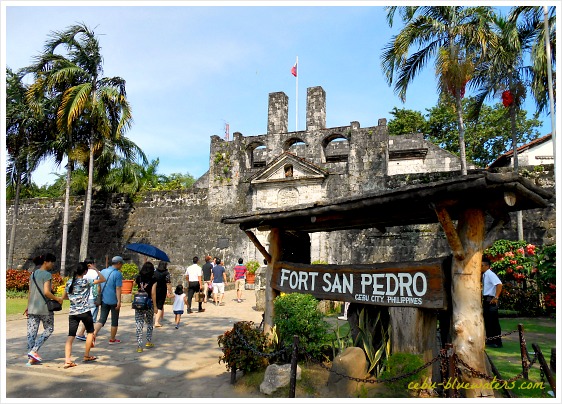 Fuerza de San Pedro or most commonly called Cebu Fort San Pedro, is a military defense structure that was built during the early times of the Spanish era in the 16th century.

This stone-walled fortress was built with barehands, sweat, and blood by Filipinos who were the supervision of their Spanish superiors. Although it bears the sad story of Cebuanos' past, it compensates the present Cebuanos by embracing their history and making use of this legacy as something positive... 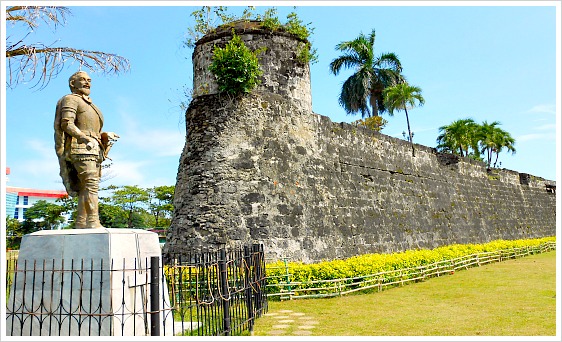 One of the three sides of the Cebu Fort San Pedro

It is considered as the oldest tri-bastion fort in the Philippines that was built in 1738 to keep the Spanish soldiers and other locals safe from the Muslim raiders.

It served as the nucleus of the first Spanish settlers in the country.

By the end of the 19th century, Filipino revolutionaries used it as their stronghold.

The fort also served as the fortification of the Japanese soldiers during the World War II. 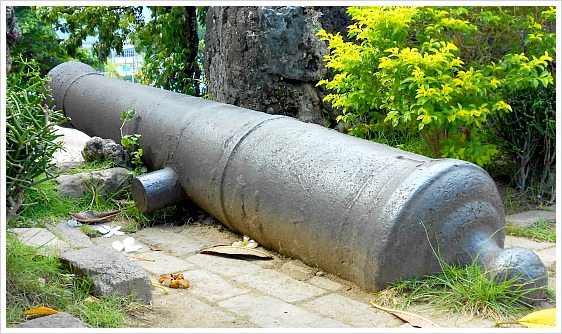 Huge Spanish canon mounted on the top of the walls

It also became part of the American Warwick Barracks during the American Regime. During this period, Filipino revolutionaries fought with the Americans against the invading Japanese troops on the island.

In later years, 1930’s to 1940’s, the barracks were renewed and have been turned into schools where Cebuanos started their formal education.

Yet, during the World War II (1945) the fort served as an emergency hospital...

Later than 1950, Fort San Pedro was an army camp till the Cebu Garden Club took over and fixed the inner part and was later converted into a mini garden. Some plants inside the fort came from Mexico which were brought by the Spaniards through their galleon ships. 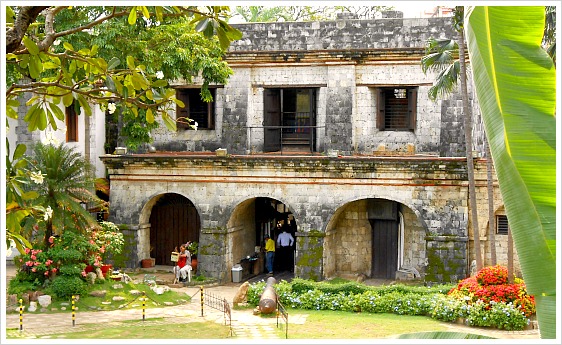 The inside of Fort San Pedro where visitors enjoy the historic walls.

It has a triangular in shape, one facing at the City and the other two are facing toward the sea. It also has 14 mounted cannons, which are still in each respected places.

The laborious construction began on the 8th of May 1565 by Miguel Lopez de Legazpi, the Spanish conquistador under the Spanish Government in Cebu.

Thus, outside the fort walls you can see the large statue of Miguel Lopez de Legazpi and Antonio Pigafetta with inscriptions of their work. 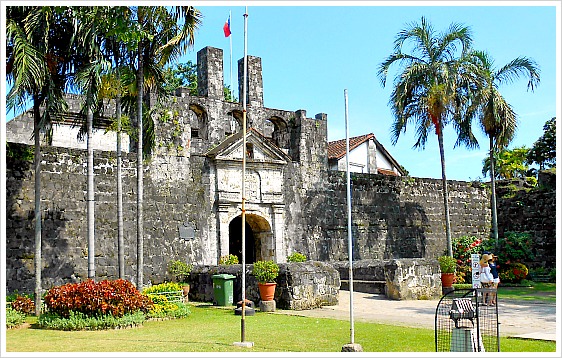 Main entrance of the fort

Fuerza San Pedro, the fort is described as built of stone mortar with a terraplein where guns are mounted. The fort contains the necessary buildings. The largest of these buildings was the "Cuerpo de Guardia" where the personnel that manned the fort lived. Adjacent to it was the "Vivende del Teniente" which was the living quarters of the lieutenant of the Fort. In between the aforementioned buildings is a well. At one corner attached to the walls of the bastion San Miguel (NE) was the "Alamazaros del Rivera" (powder magazine where the fort's supply or arms and gunpowder from Manila were stored).

The fort is now under the care and supervision of the City of Cebu, as a historical park. The land where it is located is owned by the Department of Environment and Natural Resources. 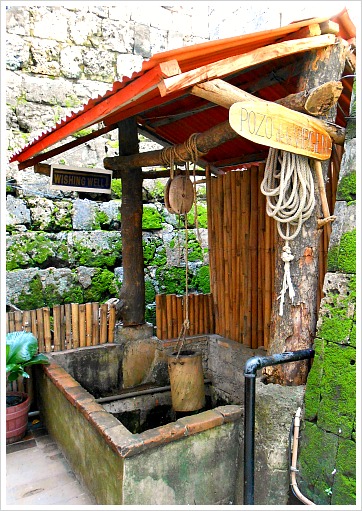 Where and what to find at Fort San Pedro

Fort San Pedro is located at Plaza Independencia, in the Pier Area of Cebu City. When you are already in the City, ask for any Jeepney that travels the Pier area, or take a taxi for a quicker ride to this Fort.

Nowadays, part of the fort is a museum where the Spanish documents, artifacts, sculptures, paintings, swords and other weaponry are being displayed.

The inside of the walls has been turned into a garden bedecked with some green and flowering tropical plants.

Thanks a lot for visiting and scanning the page.

Please, visit this free travel guide site more often to discover more destination guides or any nice vacation place you wish to be when on the island.