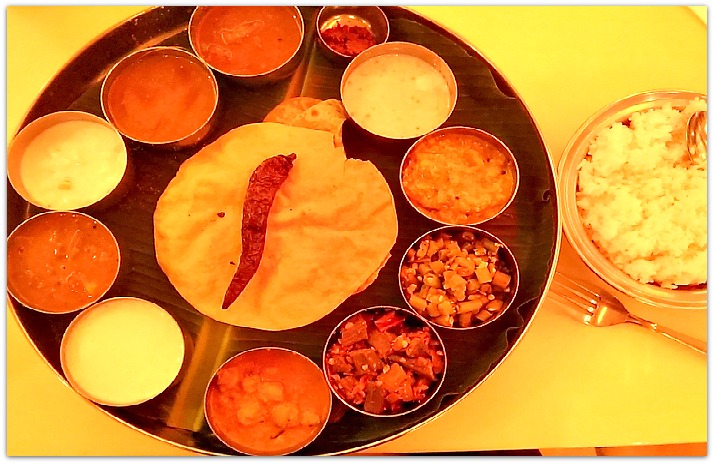 One of the dishes among the thousands of Indian cuisine

Indian food is one of the world’s cookeries that encompass various regional cuisines native to India itself.

Due to its land size, India has a diverse range of soil type, climate and weather conditions that produces wide range of spices, herbs, vegetables, fruits, root crops that are being used locally.

The way Indians prepare food are very much influenced by their religious and various cultural differences and preferences.

Most vegetarians and other diet obsessed individuals would love Indian cuisine. That’s because the Hindu and Jain beliefs are tied to vegetarianism – a dietary trend not only among Indians but also around the world at large.

During the years of Mughal and Delhi Sultanate rule, including the Persian interactions on North India, the Indian cuisine has been influenced by Islamic preferences of food preparation styles.

However, due to the nation’s social and cultural interactions, Indian food has been evolving ever since.

Indian cuisine has developed its present form and taste due to the 5000-year history of different groups or cultures that interacted with this subcontinent.

Aryans, who migrated and occupied various places in the country in around 6000 BC, has greatly influenced Indian cuisine.

Most cuisine influenced by the Aryans is the food from North India, which specifically use dairy products – primary product used by nomadic herdsmen.

The present variety and diversity of Indian cuisine are influenced by the later cultures from the Mughals, British, Turks and Portuguese (such as potato) influences.

Well, that's the briefest historical background we can offer you so that your interest and appetite for Indian food builds up.

I would say that if all the ingredients from diverse places in the world are combined, one can find them all in India. So, let’s take a pip at some Indian staple food…
Pearl millet (bajra), rice, whole-wheat flour (atta), lentils, pigeon pea (toor), black gram (urad), and mung bean (moong)

Now, let’s see if we can find some authentic Cebu Indian cuisine in restaurants that provide real Indian taste. The following are just but few of the places where Indian food is very accessible. More restaurants – and maybe much better ones – are just around somewhere on this island.

Maharaja Restaurant claims to be the “only restaurant in Cebu that serves the most authentic Indian cuisine.” Many say that it is one of the most popular restaurants in Cebu, which was opened in 2005.

Maharaja offers a spacious dining area that can accommodate huge crowd at once that is if you’re having grand parties or other social meetings.

This Indian restaurant offers you various lists of cuisine – for those who can consume any food variety and without any allergies. Aside from such non-vegetarian food, it is a good news for vegetarians and vegans to visit this place to try their delicious vegetarian cuisine.

Maharaja promised that you can afford their world class standard service and food price. You may visit this place by taxi or cab.

You can find Maharaja Restaurant at the…

Now, you may call any of them and book for your Cebu Indian cuisine dinner.

Have fun and enjoy your Tandoori chicken or any! ^^