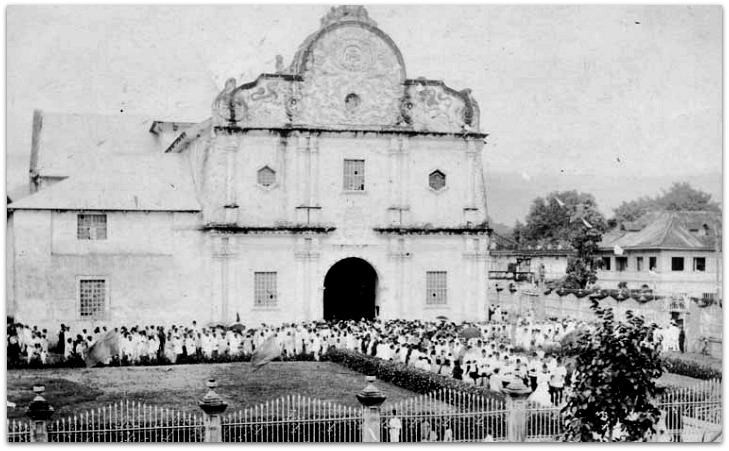 The old Cebu Metropolitan Cathedral with no symmetry - renovation was needed then in 1829 (?), Photo: Cebuano Studies Center, University of San Carlos, Cebu City

The 'Cebu Cathedral', as it is popularly called, is the ecclesiastical seat of metro Cebu Archdiocese in the Philippines.

On 14 August 1595, Cebu has been established as a diocese and elevated as a metropolitan archdiocese on 28 April 1934.

The church was established as the seat of Cebu bishop when the province became one of the suffragan dioceses under the archdiocese of Manila in 1595.

Just like all the churches built during that period, Cebu Metropolitan Cathedral started as a holy place built with wood and nipa palms as its structure, according to "Balaanong Bahandi, a book  on the Sacred Treasures of the Archdiocese of Cebu." 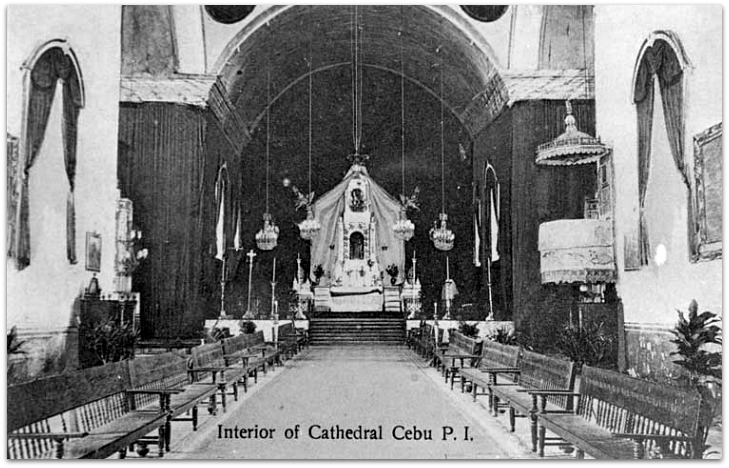 Interior of the Cathedral back then (taken in 1945). Source: Cebuano Studies Center, San Carlos University

There was no decent church building from 1665 to 1741 but only a barn covered with coconut palms where the missionaries celebrate the mass with the people.

Resil Mojares, Cebu historian, said that was generally finished only in 1786 but was in ruins in 1829. A renovation was started in 1865 and another plan to build another church were interrupted during the revolution in 1898.

The construction of the cathedral has frequent interruptions prolonging its completion which is typical among huge structures, especially churches. One of the most common reasons is lack of funds and other man-made and natural events. 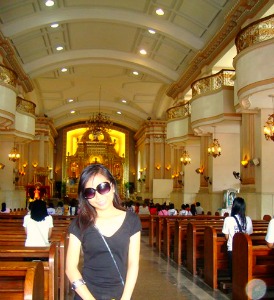 Much of the cathedral has been destroyed by the Allied bombings of the city during the Second World War.

What remained after the war were the belfry (built in 1853), the facade, and the walls, which are usually stronger to resist against impacts.

The strong structure - especially the walls are made to stand against natural calamities such as typhoons and earthquakes. The walls are about 2 to 3 meters thick.

However, under the supervision of Jose Maria Zaragosa, an architect, the whole church has been quickly restored, which occurred during Archbishop Gabriel Reyes' incumbency.

Typical of Spanish colonial church architecture in the country is the squat and with thick walls to withstand typhoons and other calamities. 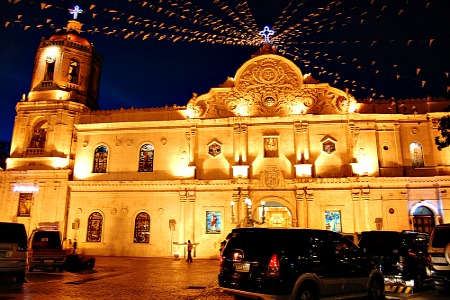 According to "Balaanong Bahandi", the cathedral is a Baroque-Rococo style. The facade with a trefoil-shaped pediment - decorated with carved relieves of:

At the main Cathedral 'retablo' (a devotional painting, particularly a small popular or folk art one using iconography derived from traditional Catholic church art) has the following features:

Then you can also observe the Spanish Royal Coat of Arms set above the main entrance that reflects the contribution of the Spanish monarch during its construction. 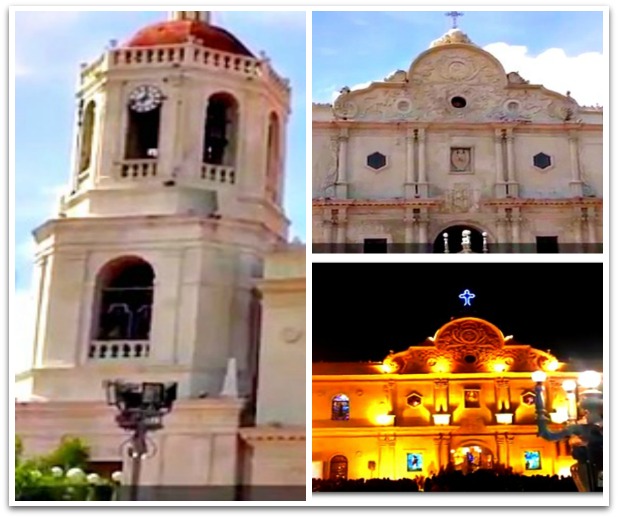 Belfry and the facade of Cebu Metropolitan Cathedral

At the back of the sacristy, a mausoleum has been built as initiated by Archbishop Julio Cardinal Rosales in 1982. As it is meant to be, it serves as the burial or resting place for Cebu's bishops and clergy.

Three months after its inauguration Cardinal Rosales died and was interred there along with the remains of Bishop Juan Bautista Gorordo, the first Filipino and Cebuano bishop of Cebu, and other archbishops.

In its 75th anniversary celebration on 28 April 2009, the cathedral has been renovated and was elevated into an archdiocese.

Cebu church officials has applied for the cathedral's elevation into a minor basilica, in honor of St. Vitalis - an early Christian martyr, which is still pending at the Vatican.

Ricardo Vidal, Cebu Archbishop Emeritus, was the parish priest in 1981 of the Cathedral and the one who initiated the renovation by putting a 'symmetry' of the unbalanced building.

He asked permission to build an extension, opposite side of the belfry structure where an extension for baptism services is held, by following the original architecture of the structure.

In addition, Cardinal Vidal was responsible for the construction of another level as a conference or meeting area for clergy, procurement of a pipe organ from Holland worth 3 million pesos, and greater development of the Cathedral's plaza.

Under the leadership of Monsignor Roberto Alesna, some renovations were implemented in 2009 to prepare Cebu Archdiocese' celebration of its Diamond Jubilee.

Monsignor Alesna improved the sidewalk of the plaza, restored the 19th century fence, created a new courtyard, and set up the 21-bell digitan carillon (musical instrument) that included the other three older ones. He also added a big clock on the belfry.

More renovations, repairs, and some additions in the interior of the Cathedral include: new wooden retablo made of mahogany, new chandeliers and lamps, new wooden canopy above the seat of the Archbishop, new stained glass windows, retrofitting the wooden trusses with steel, among other developments.

For further details about Cebu Metropolitan Cathedral, you can use the following contacts or visit its official website...

If you are already in Cebu City, finding this historic Cathedral would not be that painstaking. Just tell the driver to bring you to the place or use the following address or contact details.

It would take around 40 minutes by car or taxi from Mactan Island and costs you about less than 200pesos in a metered-taxi.

Come on and visit this holy place with its great story to tell you. It is not only a religious place but also a site that tells the story of Cebu's past and present.

Thanks for the visit & drop by again here!