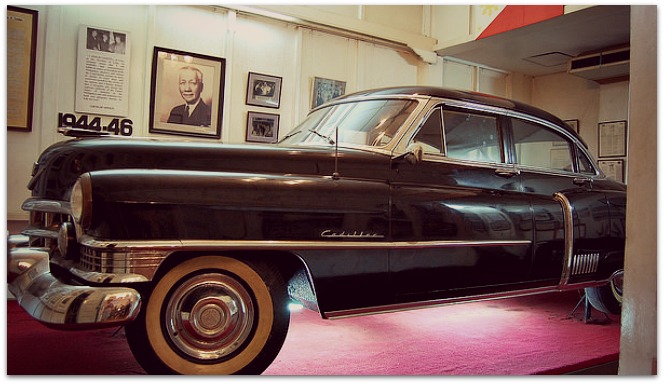 The president's Cadillac inside the residence

The Cebu Osmena Residence is one of the famous landmarks of Cebu Province. This is a former house of the late President Sergio Osmena Senior and has now been turned into museum.

Being the most prominent political figure in Cebu's history, there's nothing or nowhere that is not dedicated in memory to the Grand Old Man of Cebu.

Late President Sergio Osmena Senior's name (and other symbol-isms) can be seen in any school, military camp, streets, fountains, etc. being attached to such institutions and most landmarks of Cebu.

To learn more and enjoy better this residence and museum, it would help if we learn a bit of his life, family and achievements as a great leader.

Birth of the Leader

Sergio Suico Osmena Sr., who was born on September 9, 1878, had his roots to the wealthy and prominent Chinese-Hispanic family from the then prominent Parian District of Cebu City.

His birthplace is being marked by a historical marker along Juan Luna Street in the downtown area of this city.

Sergio Osmena, a lawyer by profession, took his elementary education at Colegio de San Carlos Cebu. Then, he continued education in Manila at San Juan de Letran College where he met Manuel Quezon, Juan Sumulong and Emilio Jacinto - other figures of Philippine history.

Sergio Osmena took up law at the University of Santo Tomas and got the second place in the 1903 bar exam. He also served as staff of Emilio Aguinaldo as courier and journalist.

Osmena married Estefania Chiong Veloso on 10 April 1901 and had ten children, including the former senator Sergio Osmena Jr. Two years later after the death of his first wife, Osmena married Esperanza Limjap with whom he had three more children.

Osmena's children has also become political figures serving various offices in the government both in Manila and Cebu. While other children became business persons and developers. 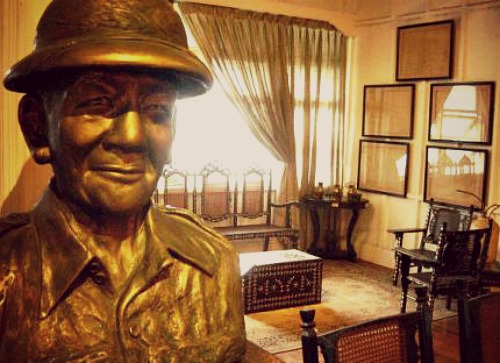 Osmena, Sergio was the fourth president of the country and Philippine independence movement leader and statesman. He was a lawyer and got elected to the first Philippine assembly and its speaker and later acted as senator from Cebu.

He was instrumental in achieving commonwealth status of the Philippines in 1935 by heading numerous missions to the United States arguing for the country's independence.

Sergio got elected twice as vice president of the commonwealth in 1935 and 1941. When President Manuel Quezon dies in 1944, he became the president of the government in exile. However, when the first elections of an independent Philippines was held he lost his bid for the presidential sit in 1946.

He founded the Nationalist Party (Partido Nacionalista) and was the president of the country in 1944-46.

In 1904, Sergio Osmena was appointed governor of Cebu Province and fiscal for the provinces of Cebu and Negros Oriental during the U.S. colonial period. He became the governor of Cebu two years later.

He was elected delegate to the Philippine National Assembly and founder of Nationalista Party which dominated the political environment of the country. He also became the speaker of the House of Representatives in 1916 which he served until he became a Senator in 1923.

Sergio visited Washington D.C. in 1933 to secure the passage of the Hare-Hawes-Cutting independence bill which removes the presence of the U.S. military bases in the Philippines.

His bill got vetoed by the Philippine Assembly and was superseded by the Tydings-McDuffie Act in 1934, making the country a commonwealth with large provisions of independence.

Osmena is known for his struggle for independence through peaceful means and acted as editor of the Cebu newspaper El Nuevo Dia, which he founded in 1900. (Source: Achievements & Failures of Osmena by Karen Gina).

The residence turned into museum 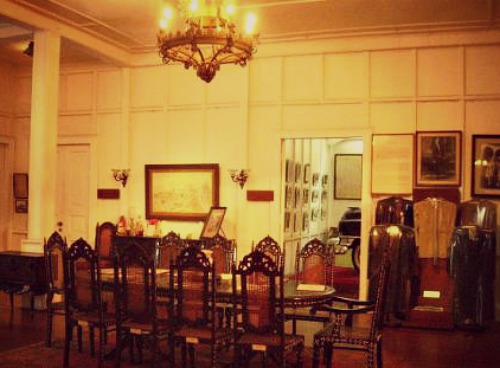 Dining area at the residence

Visiting this residential building of the former president will certainly provide you more information regarding Cebu's history and the Philippine government during the term of this great leader.

You can find Osmena Museum along Osmena Boulevard inside a house built in the 1950s. It is in this very building that the president retired after his political bid and loss against Senator Manuel Roxas in the presidential election of 1946.

President Osmena's retirement house is recently under the watchful care of College Assurance Plan. The organization uses the ground floor as their office and other transaction activities...

The second floor has been organized to look like the President's living quarter with complete furniture furnishings.

The Osmeña Memorabilia and CAP Art Gallery has 500 properties and documents owned by the late President Sergio Osmeña. The materials were donated by generous friends and relatives of the former president.

You can see different collections of paintings, usually human art forms. You cannot also miss to notice the statue of the late President outside the residence itself.

What you can see at the museum

In this museum residence you can also enjoy imagining the president's social and political status through the memorabilia including...

So, if you were in Cebu City, don't miss to see Cebu Osmena Residence and Museum especially if you're interested about this landmark and political marker in Cebu's history.

Please leave a comment below, and you may add any information not included in this page.

Now, that you have seen this relevant piece of Cebu history, you may continue scanning more historic sites and landmarks in Cebu by clicking and returning to the link below.

If you wish to learn more about Cebu Province, just scroll up and find the main Navigation to find Cebu beaches, resorts, businesses, for example.

Many thanks for your visit!