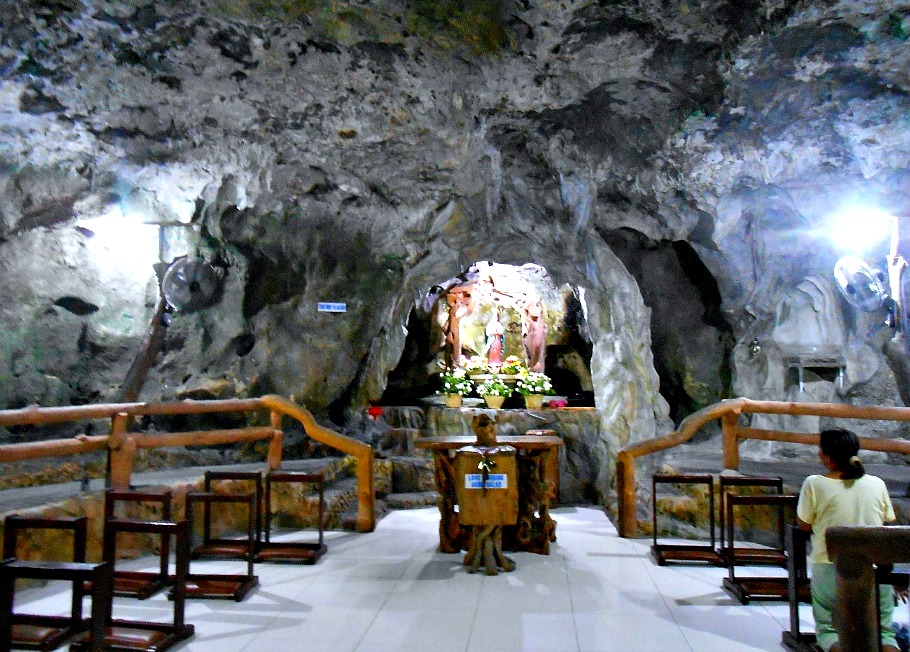 Virgin of Guadalupe inside the shrine's cave chapel

Guadalupe Cave Langub Shrine, once upon a time, became a favourite religious tourist site for pilgrims who are devotees of the Our Lady of Guadalupe. The Guadalupe Cave is also known as the Miraculous Birhen sa Langub sa Guadalupe. Inside the cave stands a replica statue of the famous Our Lady of Guadalupe in Spain. It is located in the mountainous part of Brgy. Guadalupe in the neighboring barangays of Kalunasan and Opra.  It became very popular in the early 80s because even our fellow Cebuanos who are balikbayans came to Cebu to visit the place just like my aunt.

During my college days, I frequented the place every Holy Week to do the Station of the Cross because, on the way to the cave, the icons of the 14 stations are placed on the side. So might as well do the station of the cross to make the visit holier. There, at the end of the 14th station rests the image of Our Lady of Guadalupe inside the cave. People queue in line to get inside the cave.  Once inside the cave, I could personally say that I was in a holy ground because of the solemn atmosphere and the me-and-my-God time fulfilled my spiritual being.  I also used to go to this cave to present my petitions to Our Blessed Mother since, as a Mother, she knows all our needs. I banked on the idea that Our Blessed Mother heard my prayers and petitions and urged Her Son Jesus to grant my wishes in due time.

I revisited the place last February 5, 2017. Using a public jeepney, I arrived at the corner where I used to get off from the jeepney when going to the “langub.”  For awhile, I was lost in translation because I was disoriented by concrete structures along the road. I did not see any signs pointing the way to the cave. So, I had to ask people standing by the roadside for the direction, and they were kind to tell me so.

After I had found the road going to my destination, I walked with ease then and told myself that I was already on the right track.  After three decades of not visiting the place, changes are in sight. The first sloping footpath down the lane was already cemented (concrete path) all the way to the cave.  No more worries for mud when it rains.  Despite the changes and improvements in the vicinity, I still walked on the same path going to the langub.  After a ten-minute walk or so, alas! I arrived at the gate of the shrine.

The gate was not there before because it used to be a bare, open space. I almost got disappointed upon seeing the gate closed thinking it was no entry to visitors on Sundays.  However, thank you to the helpful residents who told me to use another entrance on the other side. So, I went walking through a concrete footbridge, as told.  That footbridge is also new to me. 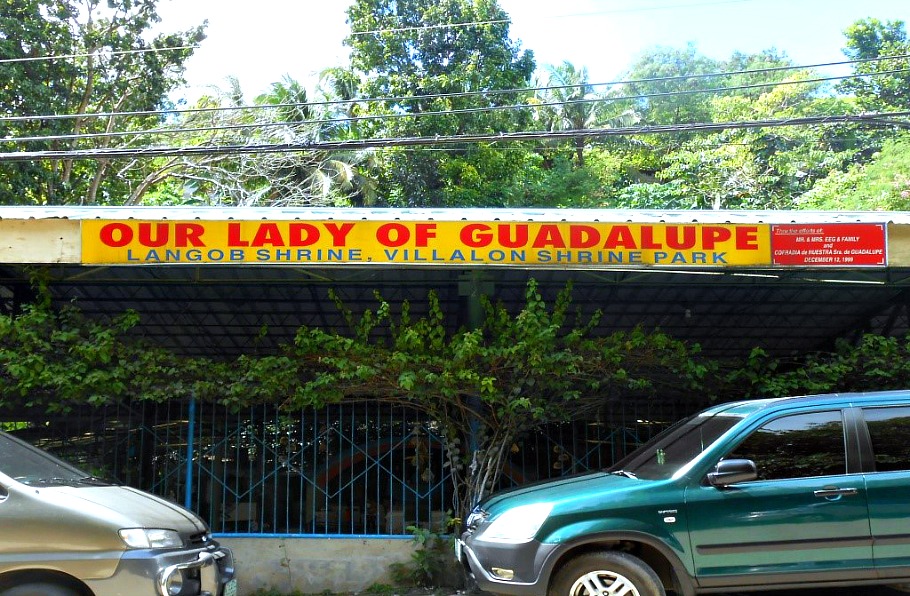 The road on which I am standing to take this photo used to be a grassy footpath only.  However, now, as a result of public road widening project, different types of vehicles, big and small, can pass through anytime. In fact, habal-habal drivers use this route to drop off a passenger in the upperland of Brgy. Guadalupe and Brgy. Kalunasan.

The little chapel is also new to me. To my thinking, this is built to accommodate the growing number of residents and devotees who come here to say the novena to Our Lady of Guadalupe and hear the holy mass after.

For the guidance of the readers, here’s the novena and mass schedule: 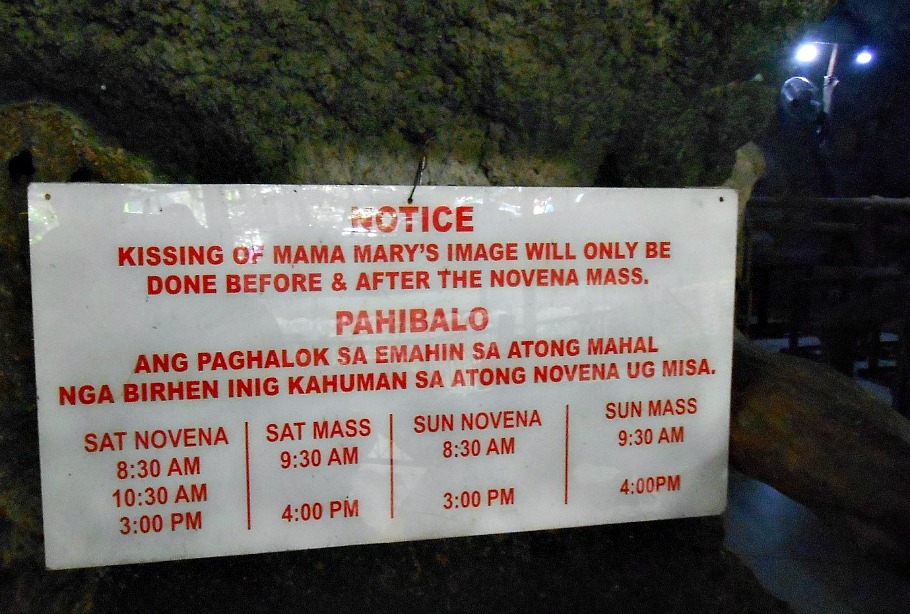 This photo is the front side of the chapel. At the back of the altar is a replica of the image of Our Lady of Guadalupe. 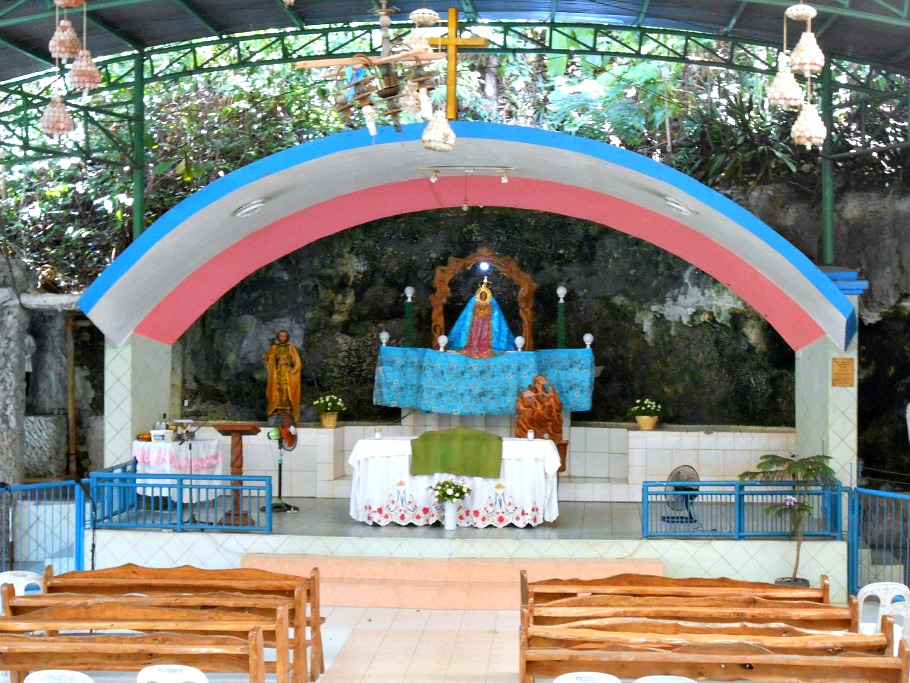 Our Lady of Guadalupe Chapel outside the cave 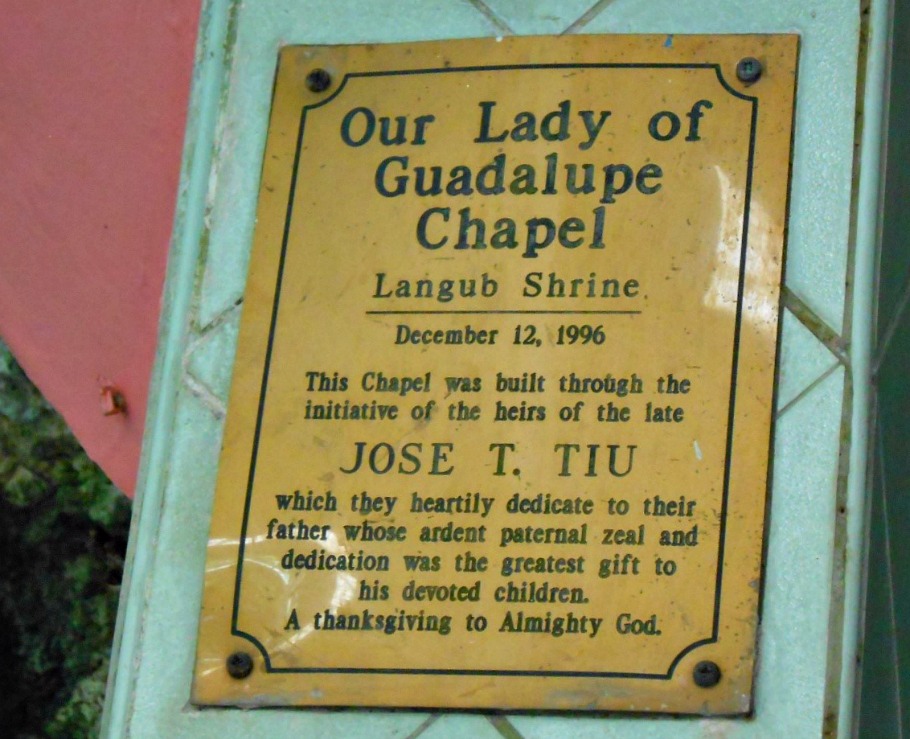 This is a closer picture of the image of Our Lady of Guadalupe which stands outside the cave. 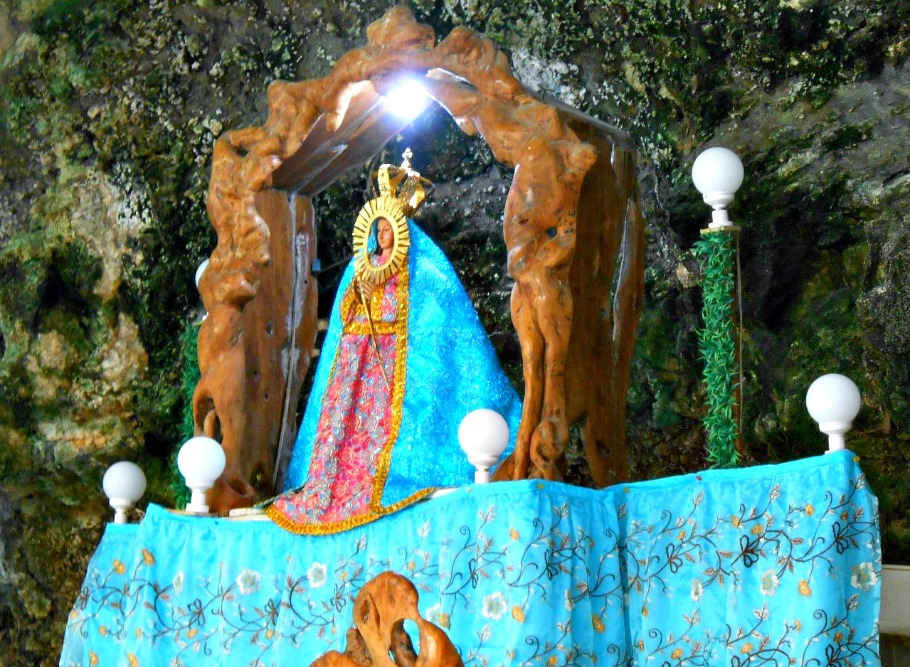 Image of Our Lady of Guadalupe

The “langub” or cave is very dear to the Cebuanos especially to the residents of Guadalupe, who believe that Our Blessed Mother has been protecting them from all evil intentions or doings of unenlightened individuals like the recently detonated bomb found in the vicinity sometime early this year. The Blessed Mother, on another occasion, has spared the city from the past typhoons.

Now, let's take a journey of this langub through these photos.

THE HISTORY OF THE GUADALUPE CAVE Langub Shrine unfolded ... 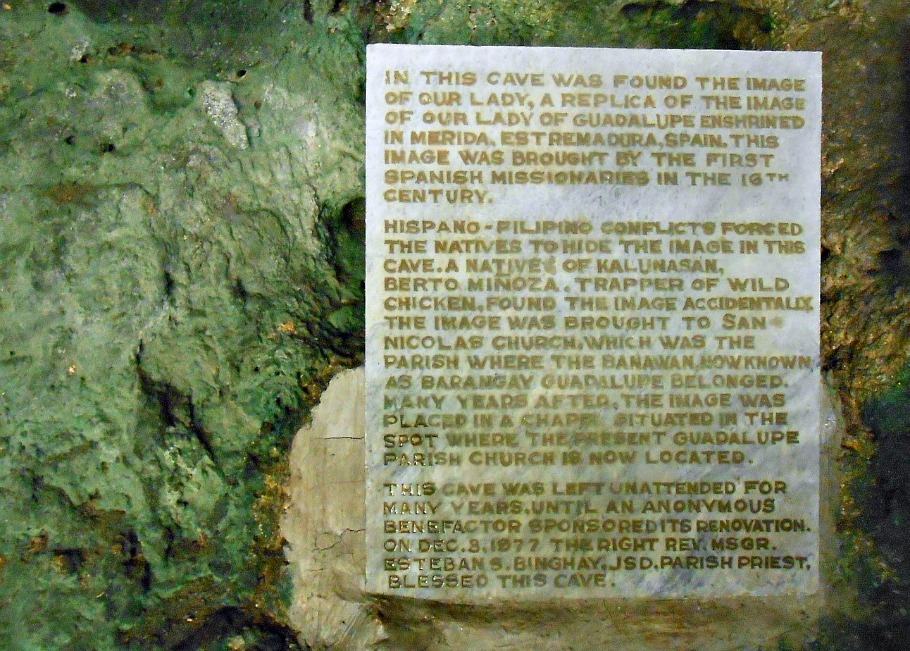 In this cave was found the image of our Lady, a replica of the image of Our Lady of Guadalupe enshrined in Merida, Estremadura, Spain. This image was brought by the first Spanish missionaries in the 16th century.

Hispano-Filipino conflicts forced the natives to hide the image in this cave. A native of Kalunasan, Berto Minoza, trapper of wild chicken, found the image accidentally. The image was brought to San Nicolas Church, which was the parish where the Banawa now known as Barangay Guadalupe belonged [to]. Many years after, the image was placed in a chapel situated in the spot where the present Guadalupe Parish Church is now located.

This cave was left unattended for many years, until an anonymous benefactor sponsored its renovation. On December 8, 1977, the right Rev. Msgr. Esteban S. Binghay, JSD, parish priest, blessed this cave.

Then I made my entrance through this little opening: 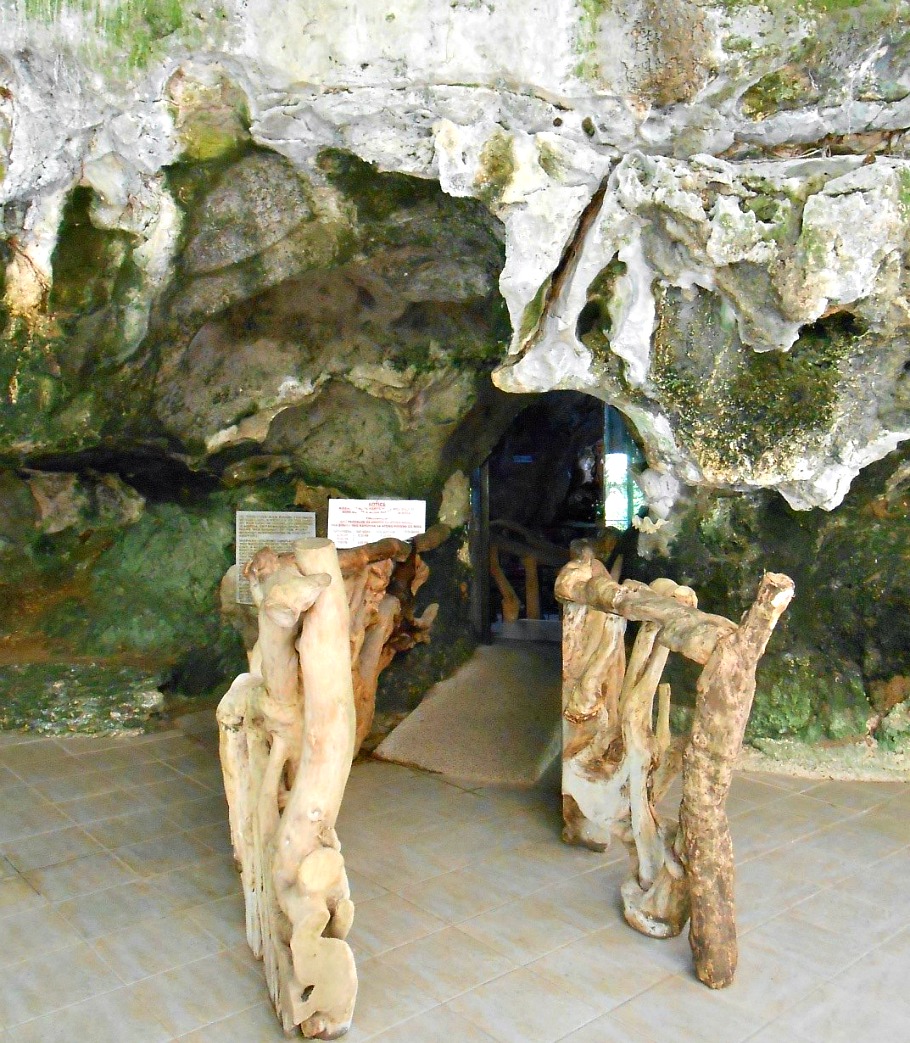 I took off my hat as I was about to enter a holy ground as a sign of reverence to Our Lady of Guadalupe. The scene of a renovated cave gave me an insight that indeed times has changed.  I was quite resistant to the change I have seen because the “naturalness” of the cave seemingly, to me, has been lost. The place is well-lit now, ventilated by electric fans and by an air condition unit. The floor is now furnished with tiles.  Feeling resistant because I like it more the old way—like holding a candle to light up the place--than the newness of the technological facilities.  I can compare the appearance before and now because I had been in this cave when it was still gaining its popularity way back then. Well, that is just the old-fashioned me saying, though.  As the old saying goes, change is the only permanent thing in this world. Well, well, well. I rest my case to that.

OUR LADY OF GUADALUPE inside the cave: 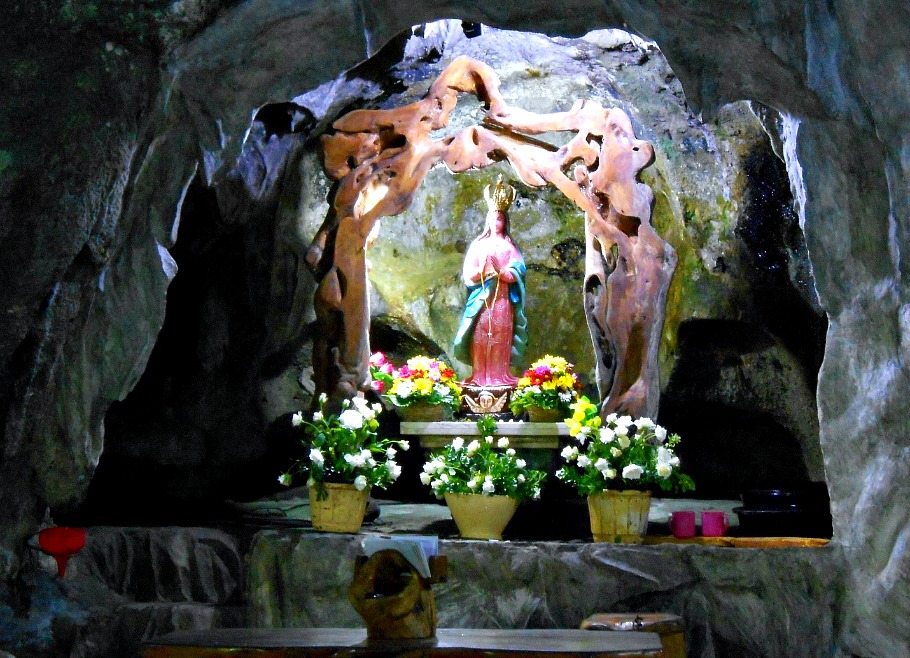 Our Lady of Guadalupe image inside the cave

There are pews provided inside this area for the devotees to spend a few moments with Our Lady comfortably.  At the center of the cave are a little altar and a petition box where you can drop your intentions to be included during the mass celebration. I paused for awhile and knelt before the image of Our Lady to whisper my gratitude and wishes in silence. 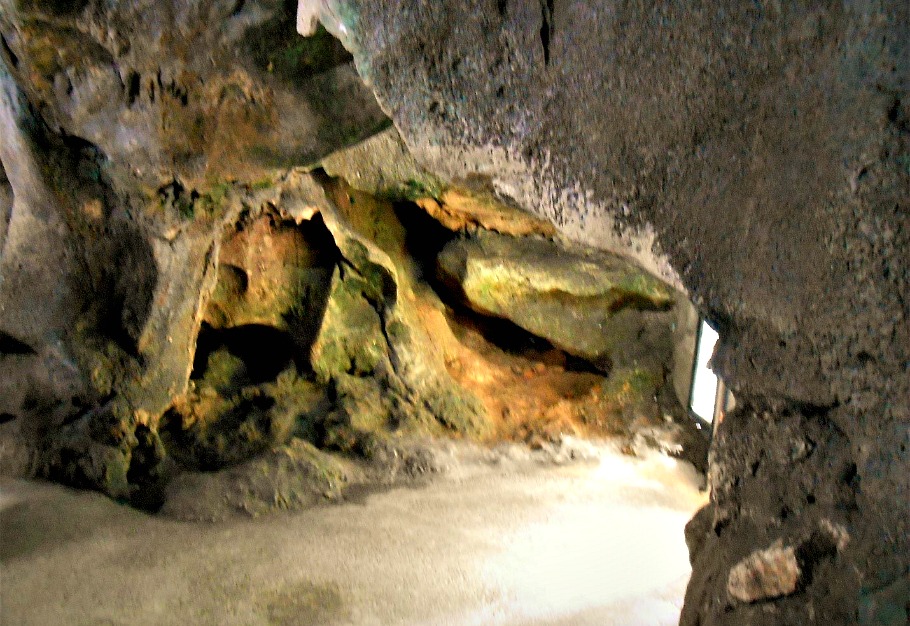 After I had said my little prayer, I got out from this exit hole 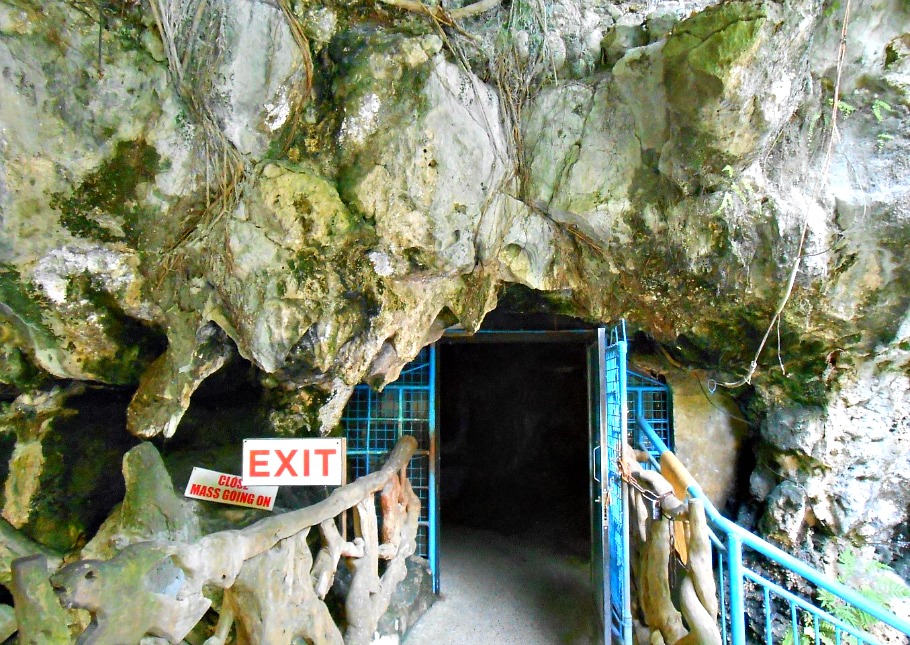 This is the exit view from the outside

Beside the exit area is an image of the Sto. Nino de Cebu. Where the Holy Mother is, there also is the Holy Child. 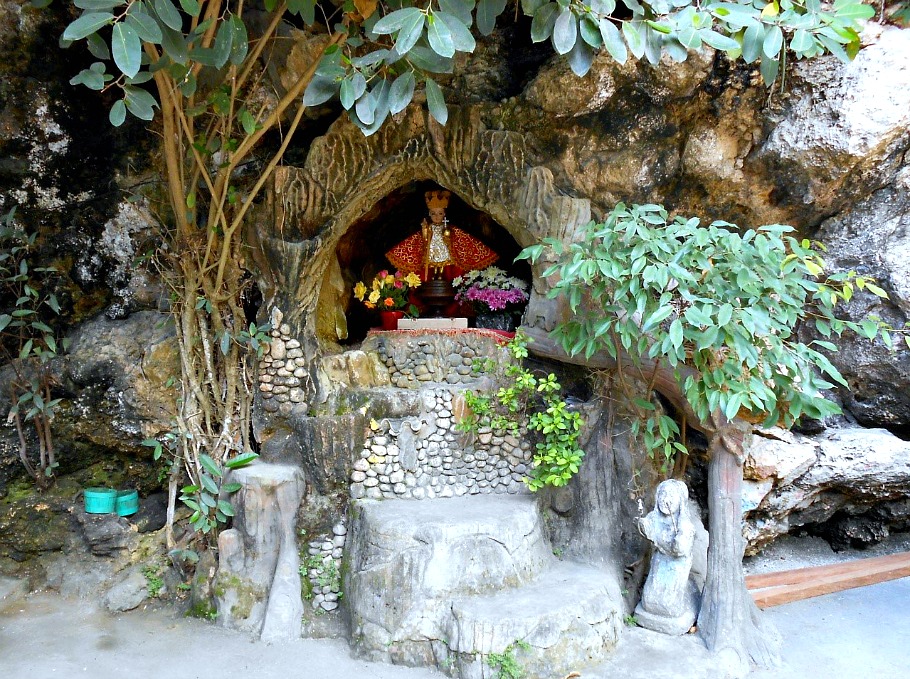 Santo Nino (Baby Jesus) outside the exit of the cave

Getting to Guadalupe Cave Langub Shrine

Now, let me guide you on how to get to this cave.  There are many alternatives.

Guadalupe Cave Langub Shrine does not only welcome believers but also curious travelers and sightseers to this site.

Thanks for reading through and hope you enjoyed this piece!