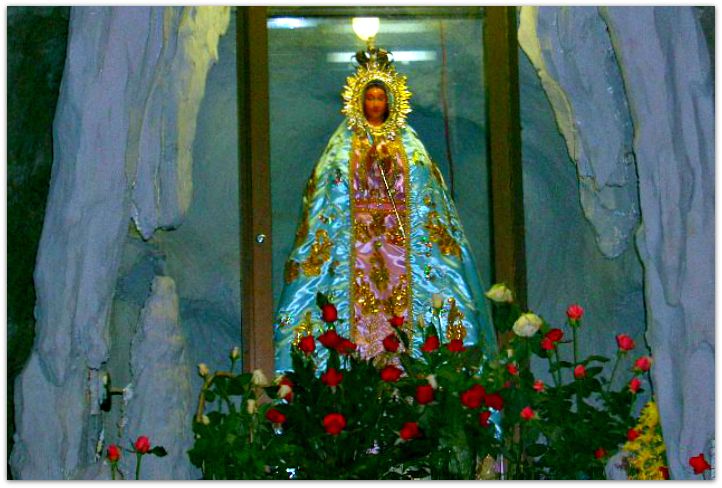 Image of Our Lady of Guadalupe (Source: catholicpilgrim.org)

This ‘mysterious’ Guadalupe Cave (or Langub Church) is a small but popular cave in Cebu Province. It is particularly popular among religious devotees of Our Lady of Guadalupe (originally named after the Virgin Mary in Guadalupe, Mexico).

Obviously, not only Catholic believers are welcome but also non-believers or other religious denomination believers who want to see the place and who are respectful to other faiths.

It is not only a place for devotion but also a destination where visitors can experience religious practice embedded in a local culture and specific to this area.

You probably might have to be easy-going if you wish to get inside the cave since visitors would have to queue up, especially during weekends or special holidays, such as the Feast of Our Lady of Guadalupe.

The story behind the Lady

Some stories surrounding the image of the Virgin include how it came to this place and who and how it became popular.

It was told that the image itself was kept hidden inside this cave by locals out of fear that the Spaniards will take it back, or, that some non-believers will desecrate the image.

When the locals hid it inside for safety, it seemed that they have forgotten it and through time it slipped out of the local’s memory. However, its recovery relates this story when a local wild chicken hunter discovered it with serendipity.

Our Lady of Guadalupe image’s rediscovery awoken the locals’ faith and hope in this lady and particularly strengthen their devotion.

Since people were busy taking care of the church and the image, the cave on the other hand was left unattended for quite sometime. However, someone sensed that there is a significance of this cave that served as the hiding place of the Virgin’s image and decided to anonymously support to clean it up for the public.

Having made it ready for public’s visit, the cave was consecrated (through a blessing ceremony by a priest) hence making it a holy place for worshippers or devotees of Our Lady of Guadalupe.

Many believe that visiting and offering petitions inside the cave can heal one from various illnesses (depending on how deep your faith is and how fervently you ask for it).

Most pilgrims who beseeched to be healed from an ailment will use the water that drips by the walls of the cave believing it has healing powers.

Developing the surroundings
Through the anonymous sponsor, the parish developed the area by providing and creating basic facilities to accommodate visitors and pilgrims.

You can easily climb up to the cave area through the concrete steps. There are sheds and benches available so that people may rest, hang around a bit and quietly reflect about life and faith in general.

Certainly, there are religious symbols everywhere and many of them are available as religious memorabilia or gifts.

Religious Service
For Catholic believers, they can participate in a holy mass being offered in the church during weekends.

In addition, there are masses being held inside the cave or ‘langub’ in local language. The cave can accommodate around 30 people inside during this religious service.

Getting There
This pilgrim’s cave is located in Barangay Kalunasan, Guadalupe, Cebu City. You can easily find it if you take a taxi or through private car/vehicle. If you are already in the city, you don’t need to spend much time and effort to get there.

That’s the most of this cave and attraction. Please, let us know should you have some updates about the place, including the recent developments, facilities and other activities not covered in this page.

Thanks a lot for reading to this end. Have a great holiday.