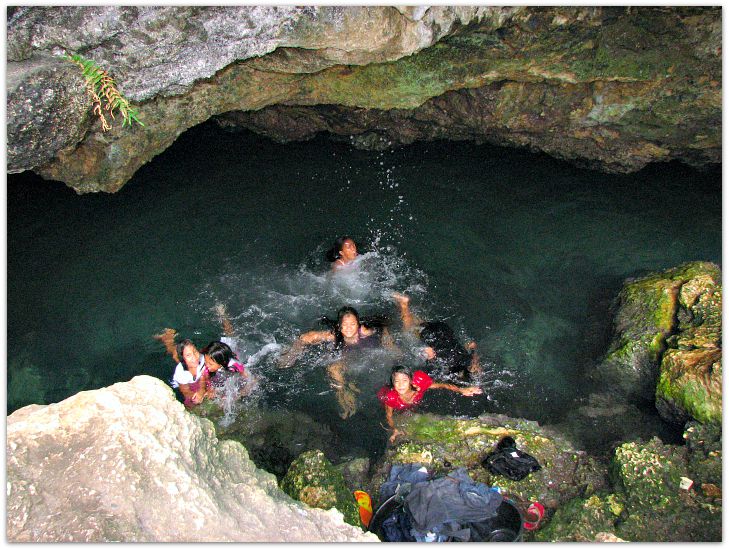 Pawod cave system is said to be a dissolution cave. This sort of cave is characterized as having sinkholes and underground drainages. Experts believe that this cave is formed over thousands or probably millions of years ago.

This makes it quite interesting and awe-inspiring especially for the one who first discovered or explored it.

Pawod Underwater Cave System is located along Mactan Island’s circumferential highway in Barangay Agus. In Cebuano language, this barangay is literally named after its literal translation in English language ‘agus’ meaning to flow or gush out or spring.

It is said that there were fresh water springs that gush into Agus Cove which is about less than 200 meters from Pawod itself. However, these springs disappeared about half a century ago.

According to the professional cave diver’s understanding, due to the “reversal of flow between PUWCS and the cove, the springs disappeared” which is caused by “overextraction of Mactan’s water table” to provide enough water supply to the island’s inhabitants (www.filipinocavedivers.com).

On the surface area above the cave system, one can particularly notice cracks that reveal the cave itself. There is a main pool which is known to everyone growing up in the area.

Exploration of caves on Mactan Island

Dr Alfonso Y Amores of the Filipino Cave Divers, who came back to Mactan Island from the USA, believed that there should be a cave system on Mactan Island similar with that of the system found in north central Florida. He believed so knowing that both places have the same geological make-up… and he was right!

Pawod Cave is not the first one he explored but the third one. ‘Doc’, as Amores is being known, related that he was awe-inspired when he first found the opening of Pawod.

“Entry into the main chamber was awe-inspiring, realizing that this was the first time light has shone into the expansive walls after thousands, maybe millions of years”, he recounted his feelings then.

Since cave diving is not known in the Philippines back then, most of Doc’s dive were done solo. After his subsequent dives and some years later, other divers started to follow suit.

Recent Cave Diving in the Philippines
To get a certificate for cave diving, one can only get it in Florida according to Doc. It means that it would be quite expensive for Asia-Oceania wannabe divers to earn that certificate knowing that you need to pay for your airfare, course fee, equipment, board and lodging and all that stuff. However, if you get that certificate in Pawod, you will need to spend about one-third only.

Aside from saving your savings, you will have a real treat from a tropical and exotic environment of Mactan Island.

The Filipino Cave Divers since then started training wannabes in Pawod’s underwater system. The number of certified cave divers are happy with their lessons and experiences and they are growing

Some interesting features of PUWCS

Doc’s Chamber
This chamber is around 15 by 20 meters with maximum depths of 11 meters. In this dome, you can have a small air space during a very low tide.

Paul’s Peril
This is a very challenging point inside the cave – a ‘vertical restriction’ as Doc calls it. It would be tight to squeeze to this area if you mount your tank on your back.

Bernillian Tunnel
This tunnel is the only and main branch of this underwater cave system. It starts from Do’s Chamber and ends ‘blindly’ at The Well being described above.

Certainly, this is an interesting discovery and a great place to learn cave diving and even earn a professional cave diving certificate.

Kudos to all divers who are instrumental in promoting this amazing natural resource. Hopefully, many people will recognize the importance of such places in our country and promote them as travel destination among dive enthusiasts.

Thanks for reading this page. Hope this helps your search. Have a fine day!