Soli-Soli Festival in San Francisco on Camotes Islands is one of the grandest festivals being held annually in the province.

It is a thanksgiving celebration among locals living around Lake Danao where the Soli-Soli grass abounds – a material being used as one of the sources of livelihood.

This festival coincides with the town ‘fiesta’ celebrating St Joseph the Carpenter as their patron saint on March (3rd Sunday). If you don’t know yet, every town in the country has a patron saint watching over its inhabitants!

Soli-Soli Festival is, for one, features a vibrant and lavish celebration by active participants sporting colorful costumes and perform choreographed dance routines.

Basically, you will enjoy the day with dancing competitions, display of local products and various sorts of merrymaking.

The festival aims to promote the town and the whole island itself to further entice visitors to travel and explore the island’s beaches and other resources.

Where San Francisco is located there is a popular lake (Lake Danao) that is abundant not only with fresh fish species and birds but also with plants that thrive around it – such as the Soli-Soli.

Soli-Soli is a kind of tall grass that grows by the lakeside where fertile nutrients and plenty of water as source of its growth. The locals living surrounding the area have been using this grass for various usage in their daily lives.

They use Soli-Soli not only for family use but also as a source of family income.

Soli-Soli is basically used as a material to weave mats – commonly use as spreads among Filipinos especially in rural areas.

Soli-Soli is easy to prepare. One has only to harvest them from the lakeside, dry them under the sun and then start weaving them with various sizes and colors.

Aside from weaving various sizes and colorful mats, Soli-Soli can also be creatively made into various utilities – such as fashion products, home decors, travel and school materials and other handicrafts.

Since mats are not that very lucrative source of income anymore among weavers (more and more people tend to use soft and spring beds), however, they become more creative by weaving other products out of the grass, such as mentioned above.

Particularly, the local weavers make handbags, clutches, pouches, hats, backpacks, house ornaments, wall decors and other handicrafts. You can make anything out of this raw material as long as you have creativity, vision and willingness to do it!

The development of the dance choreography and the idea of promoting San Francisco town was first initiated by the town’s mayor in 2002 (Mayor Al). The government official tries to promote the slogan “One Town, One Product”, which will fundamentally promote the town’s identity (Freeman, April 10, 2010).

Soli-Soli Festival is fundamentally associated with the dance competitions that are joined by various contingents from the local schools. It is the dance steps and choreography that makes the festival unique and interesting to watch.

The basic steps are original and did not come easy. Using creativity and style to perform a dance step that is organized to become the choreography of a group of dancers is something that is quite challenging.

A consultant and as an artistic director was first hired by the mayor in 2004 to do the research to establish such movements. Having established that routine, the local choreographers are then expected to use the three dance movements and development them themselves to train the students.

Anyhow, after having explored ideas and resources, the fundamental steps that serve as the basis of Soli-Soli dance have been established.

Now, having explored all about Soli-Soli’s origins and how the steps where established, let’s find out about the highlights of this festival as below.

You will certainly enjoy this one day super celebration on this part of the island. Just to briefly describe the day’s events, let’s try to feature the major ones…

Soli-Soli Dance Competition
This is the major attraction of the day and the costly one. The contingents or participants are being supported by the local government for their costumes, props and other expenses.

Most of the participant dancers are from elementary and high schools in town. They are locally trained by mostly local choreographers, unlike the festivals in other towns that hire choreographers from Cebu City.

In some towns, there is a free category wherein contingents from other towns or older groups may join in their festival competition, aside from local elementary and high school participants.

Street dancing
This is one of the most colorful, lively and interesting part of the festival. The performers execute their choreographed routine in the street and will be judged by selected competition officials based on specific criteria (such as performance, coordination, etc.)

The street dancing usually features the basic three dance steps aforementioned and while portraying the legends surrounding the Lake of Danao. The lake is the center not only of livelihood but also stories and legends being told from one generation to the next.

Lavish costumes, props and other materials are specifically tailored and planned to fit with the theme and the whole thanksgiving celebration itself.

Showdown competition
This competition is again being joined by the same street dancing groups. They perform a well-organized choreography, however this time, it is livelier, loud and frenzy.

This is usually held in an open and wide space such as a gymnasium in a school or government’s public open facility.

Of course, the locals will not miss this annual spectacle who would flock in and take the bleachers of the gymnasium – children, parents, young and old folks. The spectators are not only locals but also residents from the neighboring towns, island, or from other provinces in the country.

You will also notice that travelers and other foreigners enjoy watching this festival competition among their other purposes of visit on the island. 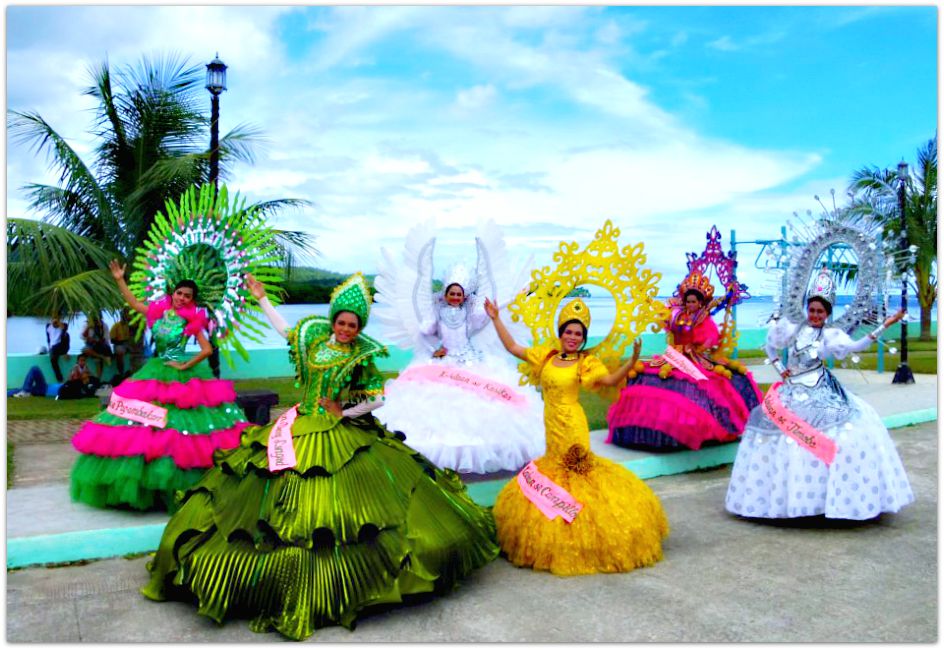 Soli-Soli Queen Competition
If you are fond of beauty contest, this could be entertaining for you. In fact, a beauty contest is almost always a center of attraction during town fiestas around the country. The reason being that it is a pride among locals and families to have such an activity, besides being entertaining to the public.

Yes, they look like very queenly – so lavishly dressed: long dresses or gowns with elaborately tailored decors, and extended crowns that seem to expand their grandiose and seemingly royal beauties.

And they too will be judged by the selected competition officials with certain criteria. These queens compete not only with their looks but also with their talents that will be tested through their performances in various aspects, including: dance performance, question and answer portion, costume, etc.

You will certainly, see more about Soli-Soli Festival when you decide to visit the island’s town and take part in the festival.

If you want to learn more about this festival, you may use the following contact detail:

You may use the following accommodation links when you visit the island. And to find the available resorts or hotels on the island, please also visit the links as follows:

Have a great festival!