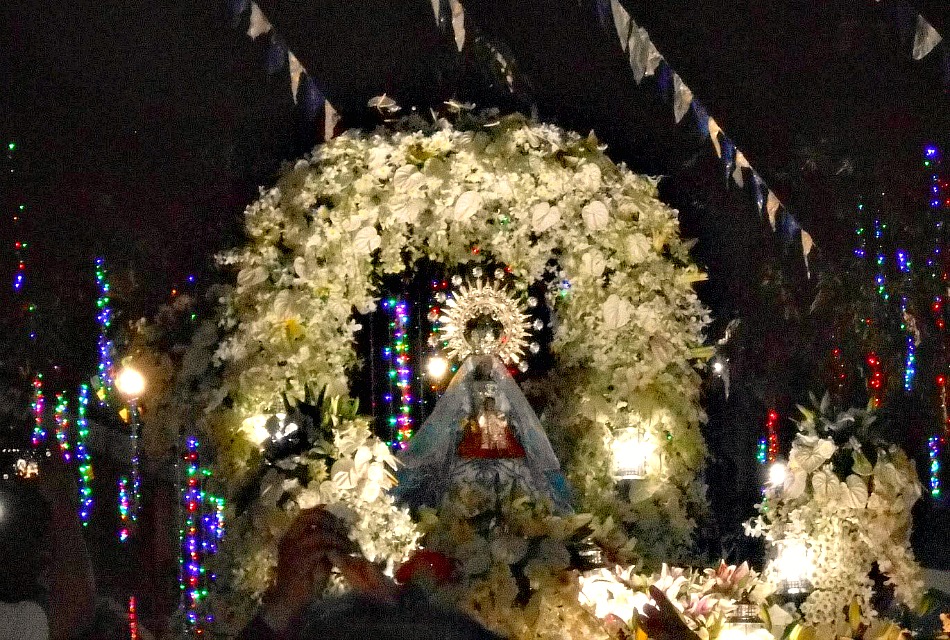 Every 21st day of November, Birhen sa Regla as commonly called by the Cebuanos in English translation, Our Lady of the Rule, celebrates its feast day. This year marks the 281st Day of its Annual Celebration.  The City government of Lapu-Lapu had prepared a series of nightly activities for almost the entire month of November.

When I reached the end point where all vehicles should stop, I could already see the carriage of the  Birhen sa Regla.  I felt so honoured that the Statue of the Birhen should come my way, close to sight. 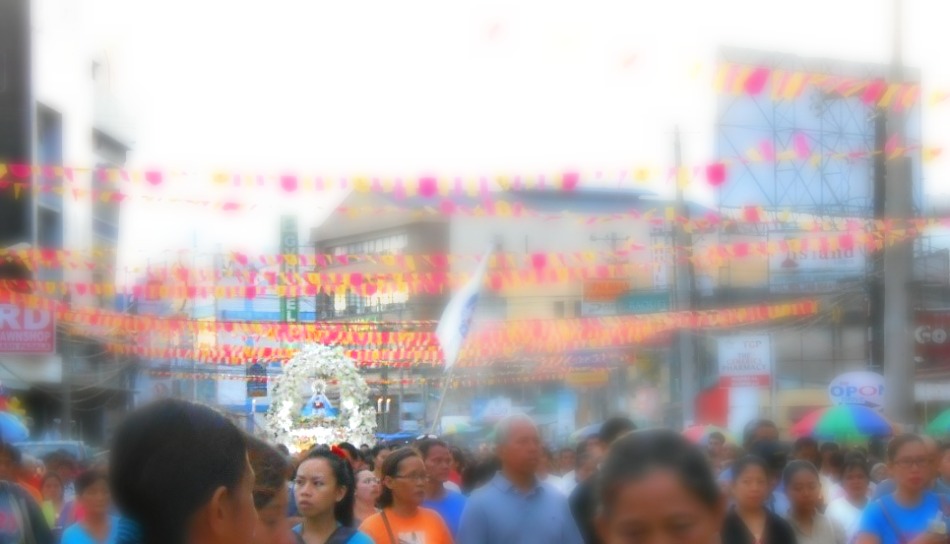 I was amazed by the numerous people walking and joining the procession saying the Holy Rosary: young and old, boys and girls, families and friends, bringing their lighted candles.  They have one thing in common--to honor and show their respect to Birhen sa Regla. 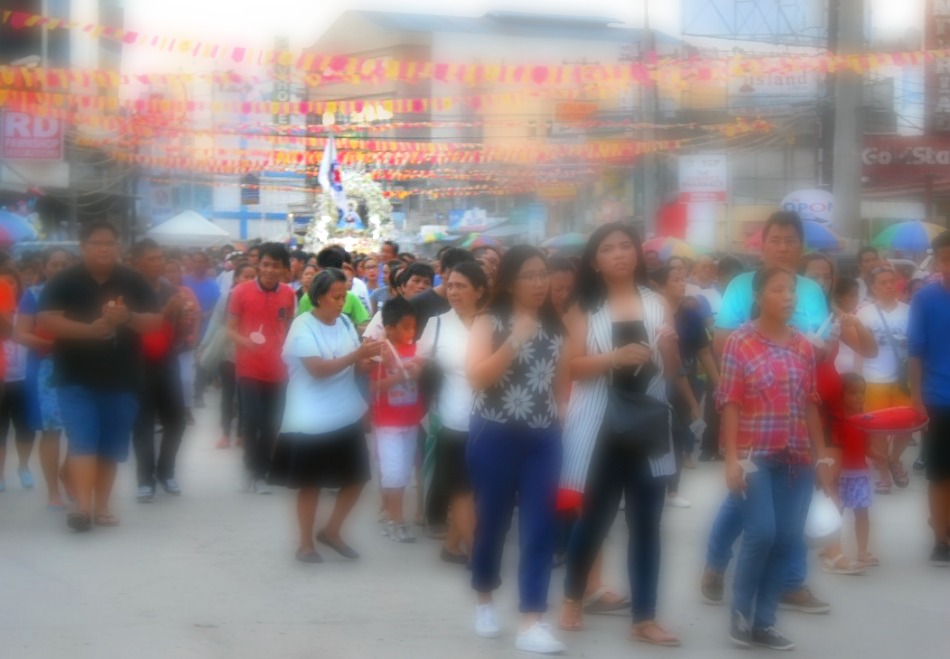 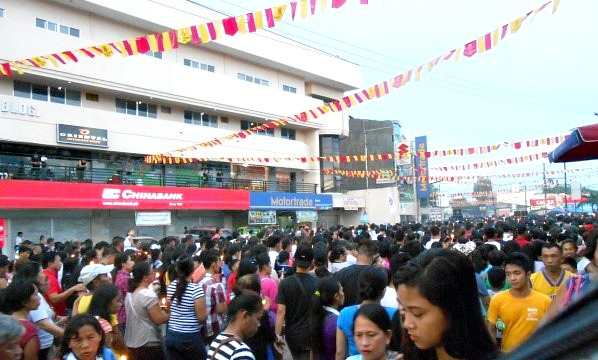 Sea of crowd of devotees to the Birhen sa Regla in Opon, Cebu

According to sources, Father Francisco Avalle, the first parish priest in Opon, introduced the devotion to the Virgen de la Regla in 1735.  From Andalucia, Spain, he brought a painting of the Virgin’s image with him and started the devotion to Our Lady of the Rule in Opon and shared it with the locals.  Such devotion has become part of the life of Oponganons.

On account of the fervent devotion of both the locals and the visitors to Our Lady of the Rule, The Nuestra Senora Virgen de la Regla Parish was made into a National Shrine by His Eminence, Ricardo J. Cardinal Vidal, Archbishop of the Archdiocese of Cebu on May 24, 2007.

His article is an account of an actual happening while observing the procession on November 19, 2016.  I am not going to tackle much on the history but I would like to share the stories I collected from a few good friends who have lived there since birth.  These are interesting stories to hear and it’s up to you to believe it or not.

According to a friend, the Birhen sa Regla has long been protecting the people of Opon from any catastrophe that hit the town such as in the World War II.

Information has it that this church used to be a shelter of local residents whenever the Japanese would target their bombs on the church and for always these bombshells would be diverted to the seas, with minor damage on the church.  They believed that it was the Birhen who spared them from the dropping bombs.  Another story I gathered is, a community servant of my friend suffered from a skin disease called Stevens Johnsons disease. Despite the medical  treatment administered her, still the disease did not disappear.  So, what the family did was they placed the old dress of the Birhen under her body and let her lay on it. After awhile, she was cured of the disease!

These people, who had received little miracles performed by the Birhen in their lives, have become devotees so that they return the favor by making her new sets of clothes. Because many have been blessed by Our Lady, story has it that Her sponsored dresses also come in number that the sponsors wouldn’t know when their donated dress would be worne by Our Lady. And, they change her clothes almost every week, according to a source.

Perhaps, there are more untold stories about the great things that the Birhen has done not only to the Oponganons but also to those who come from other provinces, near or far. Such devotion is shown by the myriad of people coming, joining and waiting until the procession of Our Lady of the Rule has come back to the church for the offering of the highest form of prayer, the Holy Mass.

As I walked along the road to find my way to the Church, I had observed that replicas of Birhen sa Regla were displayed on the streets adorned with flowers and people would also line up to say their prayer and intentions.  Some would pat lightly their hankies on the image of the Birhen while some took photos of it.  Maybe, they are like me, a first timer in this celebration. 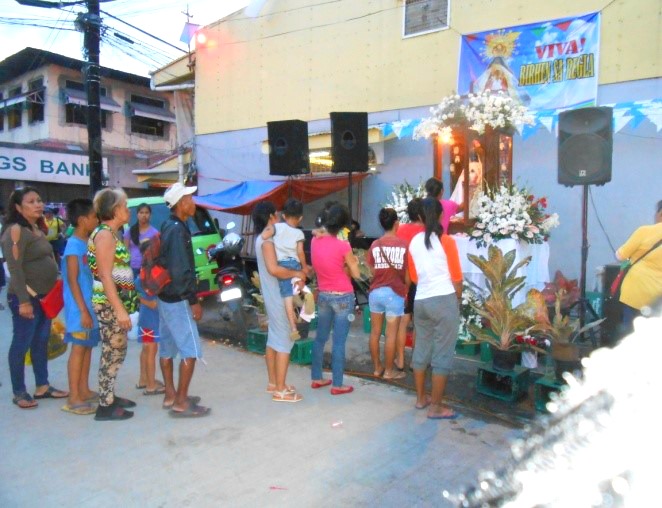 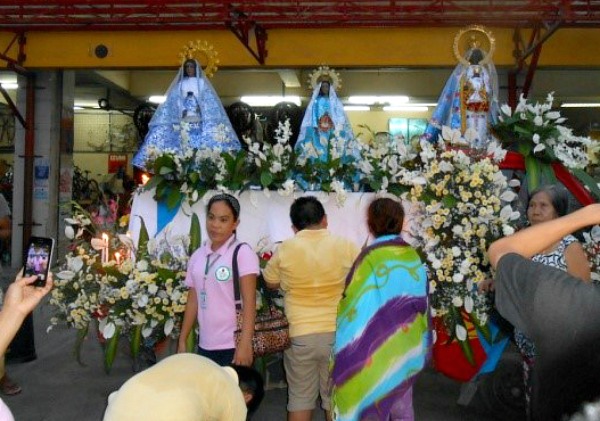 The local government unit of the City of Lapu-Lapu made sure that traffic personnel are stationed on the streets to control the crowd and ensure the safety of the walking public.  The ambulance car was also visible in the area to warrant that immediate medical attention be administered should any untoward incidents happen.

Alas, after minutes of walk, I had reached my final destination.  The Birhen sa Regla Church that I knew is now Nuestra Senora Virgen de Regla National Shrine. 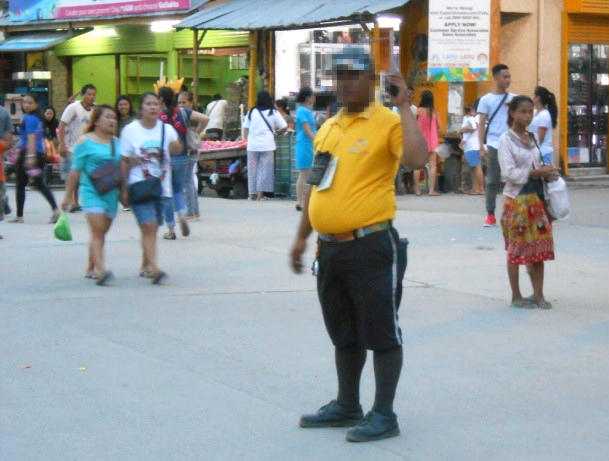 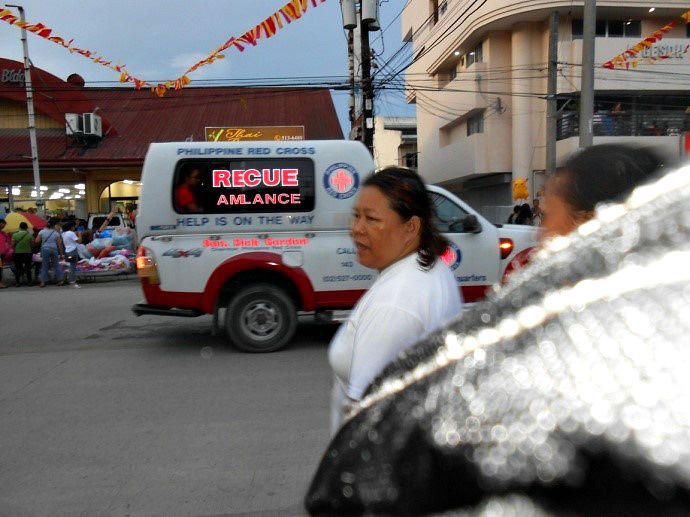 Facade of the Church

I inched myself inside the premises to see the Shrine. That very day, steel separators were installed outside the church which means that it was restricted to go beyond that fence. That made me conclude that maybe Our Lady would pass by that area. 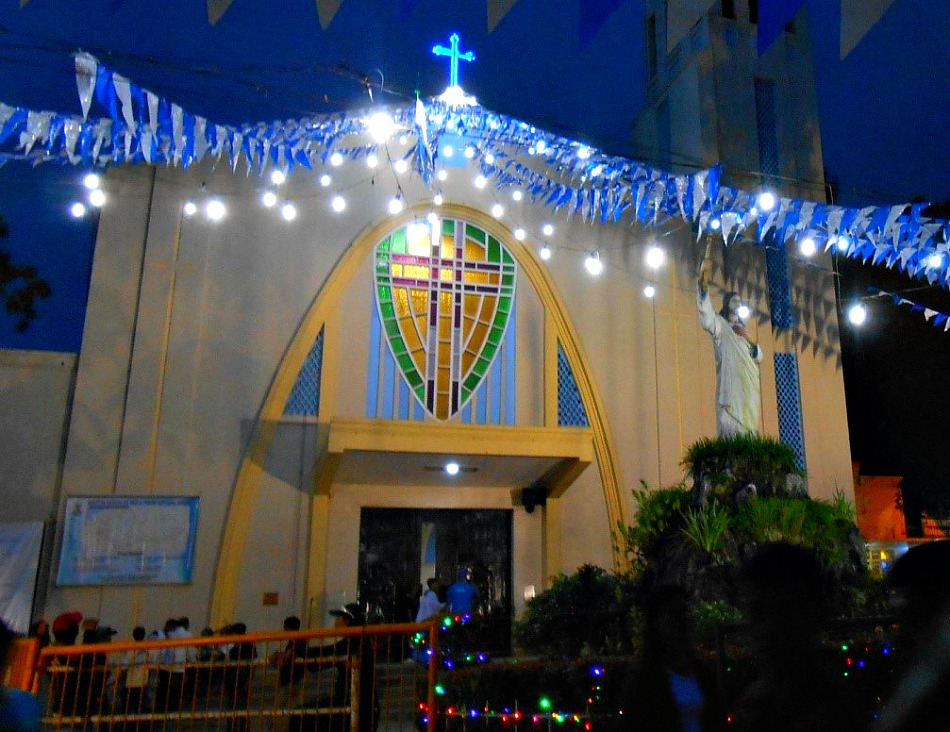 While I was walking approaching the front of the parish church, a lady in the early 40s approached me to offer candles for a price of P2.00 per stick.  She lifted my intentions by saying a prayer and dancing at the same time.  After, she gave me back the candles and taught me where to light them.   Since I do not know exactly where to go, I just followed the queue of people leading to an unpainted building.

This is my first time to offer candles for my intentions at the Nuestra Senora Dela Virgen National Shrine. I suppose the volunteer parishioners of the Church were stationed at the entrance of the Shrine to receive the candles brought by the devotees for lighting inside the Shrine.   After two to three steps from the entrance, I saw the image of Our Lady of the Rule inside a glass window on my right and I observed a fire chamber where they light the candles.  I figure this is done to avoid overcrowding in a small area where Our Lady is posted. Then I discovered that Our Lady of the Rule is black in color.  The image of Our Lady carries a Sto. Nino pressed on her chest.  Rumor has it that the reason why Our Lady is black because she was burned together with the Sto. Nino although this account has no proof to support it. 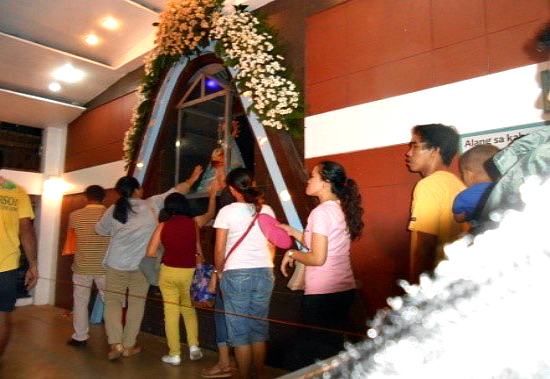 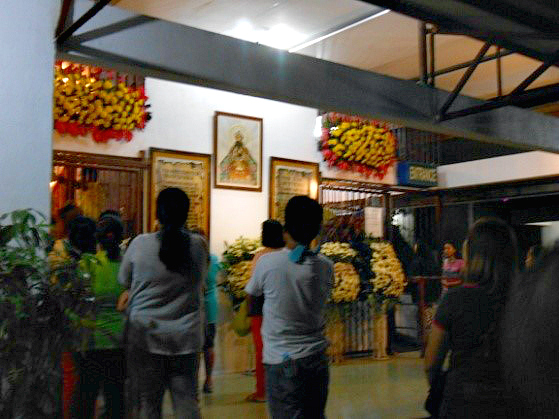 After tapping my hand on the glass of the image of Our Lady, I went down to the spacious lobby where devotees can stay for awhile to commune with the Birhen and to lift  their prayers, intentions or petitions. A prayer for Our Lady is also posted on a large board. 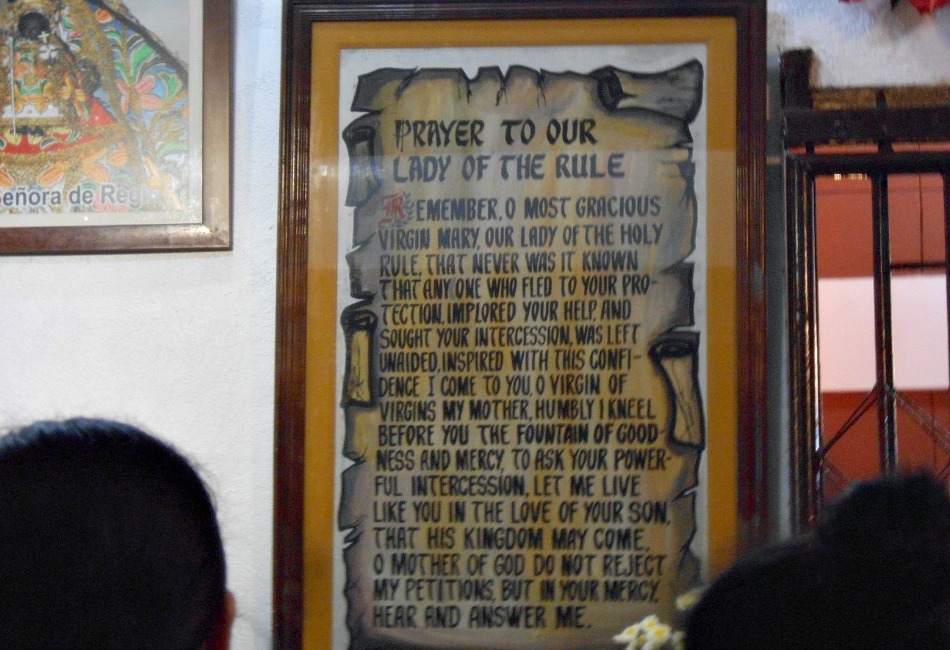 I noticed that devotees went straight to the church waiting for the arrival of the Birhen sa Regla coming from her processional rounds.  Some were already comfortably seated inside. Some stood in the aisle of so they could witness the processional march of the Birhen as it goes to the altar. And some people stayed outside.  The altar was beautified with white flowers as a sign of purity that is so appropriate to Our Lady and decorated with bright lights to fill the atmosphere with life.  Such display of preparation and of waiting apparently shows that the Oponganons love their Patroness dearly. 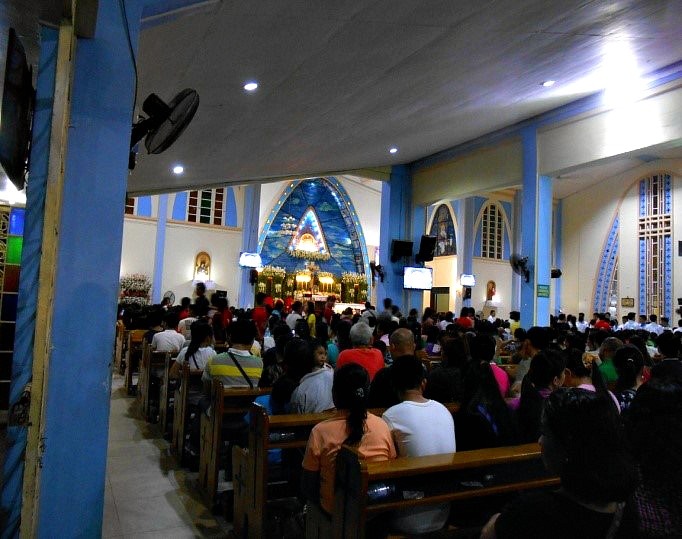 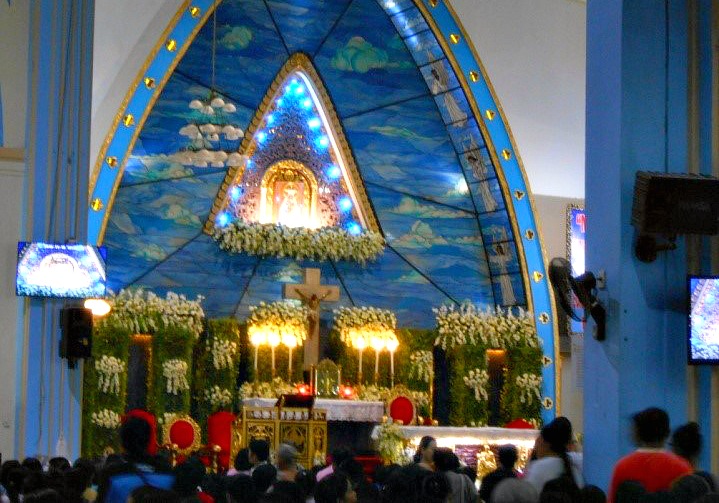 Finally, the waiting is over and the Birhen appeared in view, dressed in her usual colors, blue and white, carrying the Child Jesus, the Sto. Nino. Conveyed on a carriage beautifully adorned with several kinds of white flowers like anthuriums, asters, chrysanthemums, orchids, and chanting Viva La Nuestra Senora de Regla! She had finally arrived! People waved their hands to welcome her. 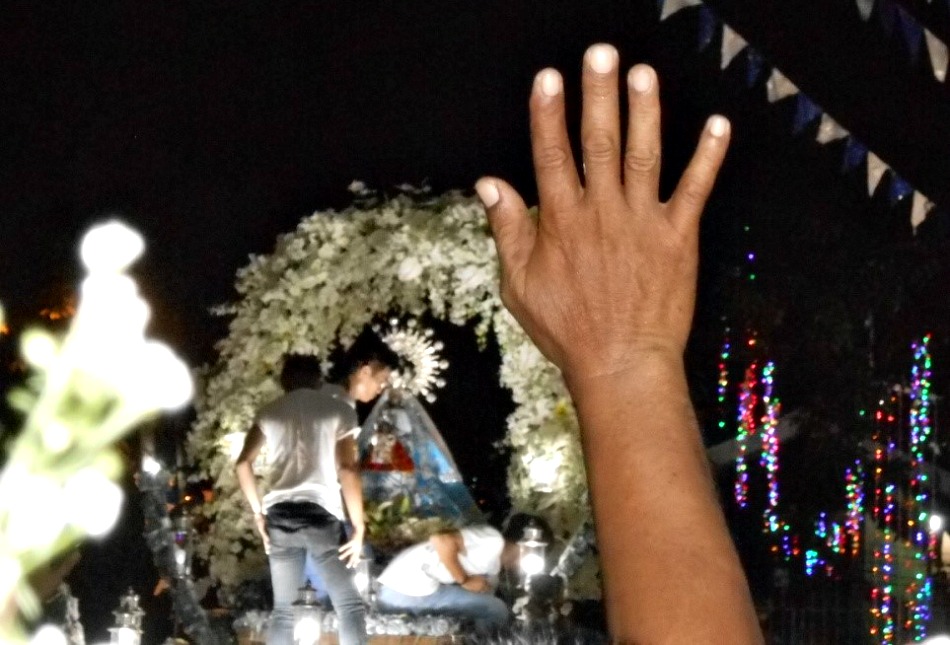 Waving while praying to the Birhen sa Regla during a procession

The praising hand, waving to Our Lady.  Such devotion cannot be questioned. Perhaps, his little prayers were answered. Where the questioning ends, faith begins.

The two gentlemen on the carriage are picking up those flowers from the arc of Our Lady and throwing them away for the devotees to catch because their belief is that the flowers are blessings that will heal them through the intercession of Our Lady of the Rule.

I also picked one for myself.  For this one stem of flower, a new hope is reborn.  The hope is that despite the many obstacles and challenges in life, the love of Our Lady remains steadfast and loyal to us.  A constant reminder to honor the cycle of life, both at its end and with new beginnings. 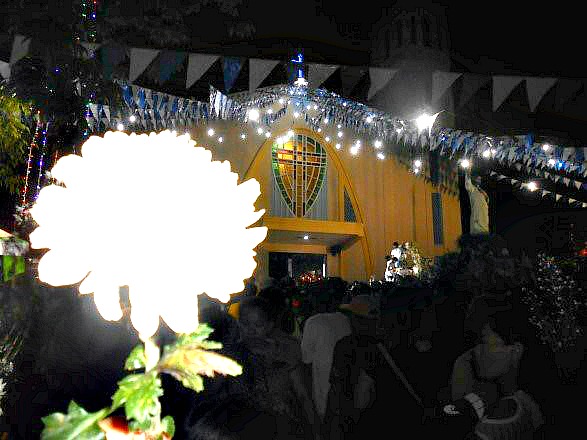 How to get there with less traffic

To avoid the famous mannequin challenge of cars due to heavy traffic, here are ways of reaching the Church without taking the challenge.

I took the third option. My trip was all smooth. For a bus fare of P20 to P25 from SM City and P100 pakyaw of habal-habal ride from Parkmall to the Church, I reached the vicinity of Opon in less than 45 minutes and got in time for the passing of the procession. 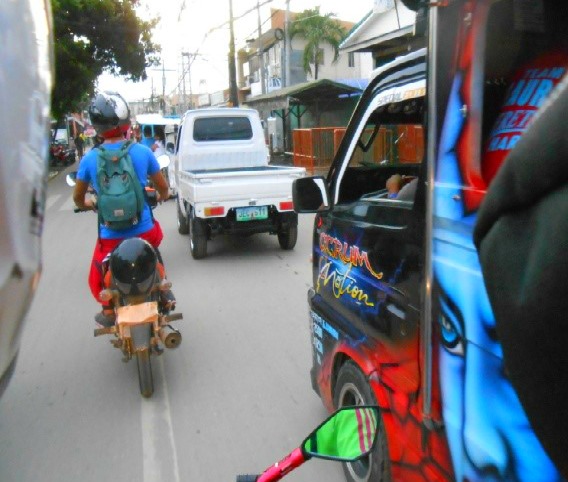 A motorcycle or 'habal-habal' driver cuts through a heavy traffic

The best option to reach Opon during fiesta day is to take the ferry boat to get you straight to the back portion of the Church, or take the Mybus from SM City to Parkmall  then take a habal-habal to Opon.  The advantage of the habal-habal is that it can move from one side to the other without waiting for the car ahead of you to move.  With a motorcycle, the driver can easily maneuver to pass through the small spaces in between cars making your trip fast. You just have to hold on tight to your seat.

For head protection, the driver can lend you his extra helmet because the ordinance now requires motorcycle riders to use them.  But, let me warn you, these helmets are shared by every passenger that the driver takes for a ride.  If you are a delicate person and does not like sharing your sweats with the helmet, you may bring your own helmet by all means.

In the entire duration of the feast, heavy traffic is in every corner of the streets because there are road closures and rerouting of vehicles to make it convenient for the walking public.

Upon reaching the other end of the First Mactan Bridge, all traffics were advised to take another route because of the approaching procession.  This is a good time to exercise the virtue of Patience because it took me additional minutes to get to the Church.