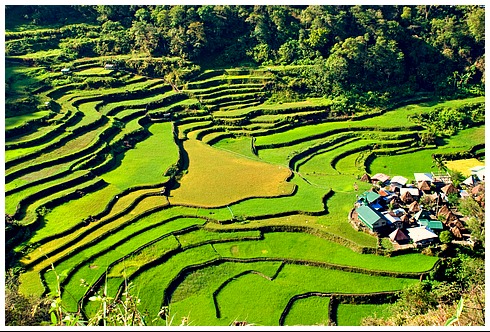 The Rice Terraces of the Philippine Cordilleras is over 2,000 years old high rice paddies of Ifugao people at the mountains of the Cordilleras, Luzon.

It is a product of knowledge handed down from one generation to the next. These terraces also express spiritual traditions, intricate social/communitarian balanced values, as well as harmony between the Ifugao people with their environment.

How this structure is being maintained through many generations reflects a cooperative communitarian method in terms of manual labor, irrigation system, pest control, and other conservation and preservation expert knowledge and mastery.

The Rice Terraces of the Philippine Cordilleras is considered a great example of a ‘living cultural landscape’ that goes back two thousand years ago.

These terraces consist of five clusters of which four of them are located in four municipalities.

These impressive terraces are the products of the Ifugao ethnic group’s toils. Ifugaos are indigenous group of people that has settled on these mountains for over two millennia. 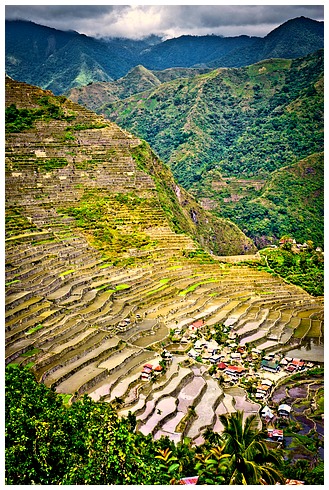 The Five Clusters of Terraces

When you visit the Cordilleras’ terraces you may just pick one or all of them if you have much time to spare. The five clusters include…

Some of the reasons included in choosing the Cordilleras terraces in UNESCO’s list are its living cultural value and contribution to humanity in general. We could say that these terraces are still extant fundamentally owing to the harmony of physical, socio-economic, religious, and traditional political environment.

There are many criterions to abide by in considering a particular world treasure to be enlisted at UNESCO. Seemingly, Cordilleras rice terraces passed three of them.

The first one mentions that the rice terraces can be a proof of a community’s intricate way of living employing a farming system that has helped them thrived for two thousand years or so (Criterion iii).

The second criterion (iv) states that the rice terraces are a “memorial to the history and labour” of farmers with limited tools but has created a sustainable beautiful and intricate landscape.

And, the other criterion (v) further states that the terraces are paramount prototypical of land-tilling practice that results a harmonious relationship among communities and between people and its environment.

In other words, the steep contours of the mountains being engraved and adorned with rice paddies are the fruits of labors by a group of people who has been living harmoniously with each other and with their environment that sustains their survival. 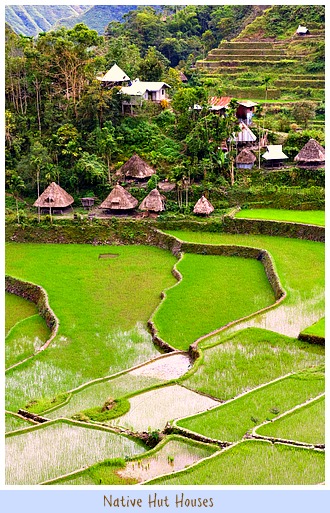 The Rice Terraces of the Philippine Cordilleras has been declared as National Treasures in presidential decrees (PD 260:1973 & 1505:1979). In addition, the terraces are also being protected by a republic act that provides protection and conservation to such cultural heritage structures.

Of course, the terraces have long been preserved and managed by traditional ancestral land use practices of the Ifugao community.

Through the decrees and acts mentioned, individual terraces are owned privately and protected through indigenous people’s rights, tribal laws, and traditional practices.

How the living rice paddies have survived to this day mirror a community’s cooperative method and shows their knowledge and mastery in agriculture, lunar cycles, zoning and planning, pest control employing indigenous herbs available, all of which accompanied by spiritual and religious practices.

Threats to this amazing human creativity, such as erosion and infestation, are present. For that reason, various policies are being implemented to prevent and conserve this world treasure.

Among the south-east Asian countries, only the Philippines uses a wholly wood-based structure for domestic buildings and ritual structures – temples or shrines (Cambodia, Indonesia, or Thailand used other materials) – such as those found in the Cordilleras.

Together with the terraces, UNESCO also inscribed the Hudhud Chants of the Ifugaos. I thought since these chants are very much, or, even directly related to the environment, it is also logical to preserve them as well.

Hudhud chants are narrative chants that are usually performed by an elder Ifugao woman during various significant events in their community and cultivation season. Hudhud chants are performed during rice sowing season, harvest time, and in other social events including funerals, wakes, among others. 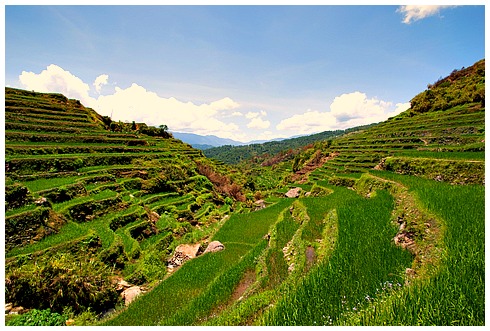 However, in 2012, UNESCO has removed the rice terraces from its list of endangered treasures owing to the success in improving and preserving this world heritage.