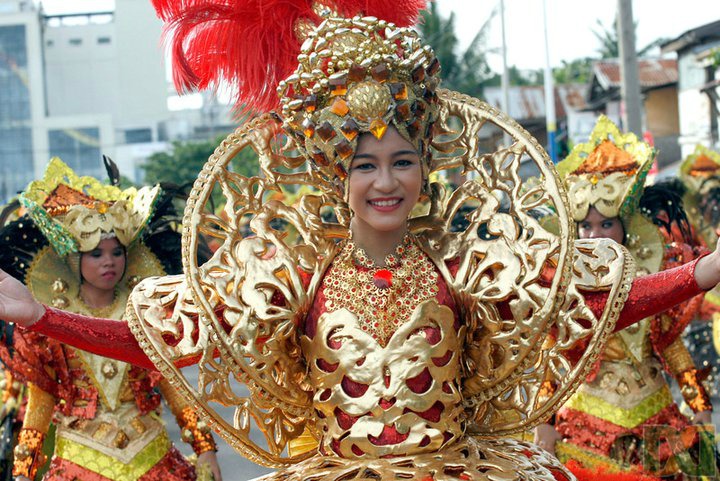 Hinulawan Festival is the biggest and most flamboyant festivity in Toledo City, Cebu Province. Fundamentally, it involves colorful and vibrant aspects of traditional dances, food sharing, among other exciting features of the event.

Some locals say that the origin of the word ‘hinulawan’ came from the two words: ‘hin’ for hinaguan (fruits of labor) and ‘ulawan’ for bulawan (means gold).

Toledo City is a new name coming from the old and new Hinulawan names. The Old Hinulawan is now presently called Daang Lungsod while the New Hinulawan is Toledo, which was established by influential leaders of Toledo City including Fernando Poloyapoy. It is a name given by the Spaniards – a name similar to a town in Spain called Toledo.

Hinulawan Festival is a unique religious annual celebration of thanksgiving to the city’s patron – Saint John of Sahagun. This is usually celebrated on the 12th of June, which is the highlights day among the celebrations days prior.

Most of the activities are being sponsored or supported by the local government of Toledo City. The programs and a lineup of events are prepared by committees and, of course, with free participation and volunteerism from local people, including church people.

Just like most local governments in various parts of the Philippines, their local officials promise to prepare an entertaining and worth remembering lineup of activities for their long days of celebrations. Same here in Toledo city!

For example, the officials invite famous comedians from Manila and other places to show off their talents during the evening activities which are usually held at a sports complex (Barba Sports Complex) – this can happen on June 1 or the first day of the celebrations.
The second day could be a night with activities in the city’s Catholic Churchyard.

Then on the 3rd to the 5th days, the so-called Talents Night, Association of Barangay Councils Night, Government Employees Night can be scheduled on the dates mentioned respectively.

Also, there is a ‘night’ that is primarily dedicated to the senior citizens which are called the Senior Citizens Night. In the Philippines, older people still retain the respect from the younger people especially among their children – a value being promoted not only by families but also by government programs and activities. This is usually supported and hosted by the Department of Education of the Philippines.

It is also interesting to learn that a Bike for Peace, physical exercises, among other activities are being performed to raise awareness for various issues to do better as a community.

Other activities that are being held in the evenings include Toledo City Public Market Vendors Night, Miss Toledo coronation Night, Non-Government and People’s Organization Night, Agriculture Night, and Business Sector Night. Wow, that is a lot of nights!

As a tradition, religious celebrations like this would not miss performing the procession ceremony of the patron saint’s image by the locals. What is more interesting in processions is that it is customarily held on the waters – mostly in the sea.

So, during this stage, Toledo people prepare their boats, adorned boats with religious symbols, and then hold the procession near the City’s pier.

I think the reasoning behind the procession on the water is that Christianity was brought to the country by explorers who were traveling via the sea. If I have to interpret it religiously, it can be compared to having a religious faith traveling on the rough waters which could be at times dangerous or challenging to the faithful.

This date coincidentally happens to be the Philippines’ Independence Day. Logically, the celebration starts with a flag-raising ceremony in front of Toledo City Hall as early as 8 AM.

Then the Hinulawan Festival celebration officially starts at noontime which will then be followed by street dancing – the most fun and impressive performances during the festival days.

The street dancing is being performed by trained dancers who will execute the four basic steps while performing. Here they are:

Rene Campomanes mentioned that historically, Hinulawan Festival is a showcase of various cultural dance techniques that depict the vibrant and colorful past and present culture of Toledo City. You will notice in the dances and costumes the cultures from the Pintados, pre-Spanish, Spanish, rural, neo-Ethnic to the modern Toledo period. With such descriptions, you should start thinking of exploring the area, especially during this season.

Other events that will occur on the same day include trade fair, visitation to interesting sites in the area, and competitions in the evening such as band competition, singing competition or search for Mr. and Ms. Toledo teen.

The various interesting lineup of programs and activities happen every year, and so you may have to keep tracking Toledo government’s programs through its social media outlets.
Thanks for reading!