One of the popular places in Luzon where travelers and tourists visit and spend time with is the famous Hundred Islands National Park.

Hundred Islands National Park (or Kapulo-puluan or Taytay-Bakes in Pangasinan language) is located in the province of Pangasinan, northern Philippines. 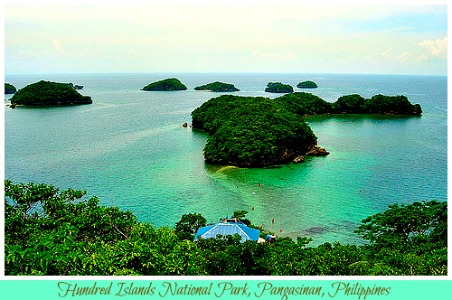 The islands dotted the Lingayen Gulf covering an area of more than 18 square kilometers. There are 124 of them and are thought to be two million years old.

Just like most islands in the country, the Hundred Islands are built up as product of corals that may have come from sea beds. During low tides, the peculiar ‘mushroom-shape’ of the islands are visible making them spectacularly amazing.

Among the more than one hundred only three of them have been touched by development projects. The three islands include: Governor Island, Quezon Island, and Children's Island. In these three islands, cottages and other facilities for tourists are made available.

Some of the facilities include cottages that can accommodate ‘informal’ meetings such as team-building, celebrations, workshops, parties, family vacation, among others.

In those islands, motor boats are available for hire to take you around the hundred islands to enjoy their fantastic shapes topped with small green trees. Looking down the seabed can one of the most enjoyable activity for a tourist enjoy with - clear water with various tropical fishes, starfishes, corals, white sand, etc.

Pangasinan is a province with Lingayen as its capital. The province has a total land area of more than five thousand square kilometers (more than 3 thousand sq.mi.).

Pangasinan is also the name of the people and the primary language being used in the province. Around 1.5 million locals speak it, while the minority ethnic groups spoke Ilocano, Bolinao, and Tagalog (Wikipedia.com).

For Filipinos, the name Pangasinan is very meaningful and significant to one’s everyday life. That’s because the world ‘pangasinan’ means “land of salt” or “salt-making area”. ‘Asin’ is the common word for most Filipino languages for ‘salt’. This province is literally one of the major producers of salt in the country.

Pangasinan is also being considered as the ‘rice granary’ of the Philippines since it is strategically located at the central plain of Luzon.

Similar to the cases in most historical trade centers in the archipelago, Pangasinan people also traded with people from China, Japan, and India. This trade is evidenced by the china wares, jewelries and other archaeological finds.

Originally, before the coming of Christianity, Pangasinan people were believers of spirits in nature, or animists. They had forms of rituals and worships being led by a shaman who takes charge of their temples/altars during their worship to the ‘anitos’ (deities).

Some believed that Christianity first reached in Pangasinan in 1324 through a Franciscan missionary who held a first mass in the province. In honor of this first missionary, Odoric, memorial markers were set up in Bolinao.

It means that this event predates the mass held in 1521 by Ferdinand Magellan’s mass. However, a historian, William Henry Scott, doubted that Oderic has set foot on the Philippine soil based on his writings (Wikipedia).

A clear and historically based fact can only be attributed to the coming of Christinaity in Pangasinan with the arrival of the Spanish conquistador Miguel Lopez de Legazpi in 1565.

Now, let’s talk about some details on this amazing hundred islands.

Getting to the Hundred Islands National Park

Travelling to get to this beautiful part of the Philippines is not that difficult at all. If you were coming from Manila, you can easily take public transports that would bring you straight to Alaminos City where the hundred islands are being scattered by nature.

Buses – Public bus companies that take this route are Victory Liner, Five Star, and Philippine Rabbit. They have various schedules of your choice; they travel from Manila, Baguio, Dagupan, Subic, Tarlac, and Zambales to Alaminos City and vice versa.

If you fly from Manila to Baguio City, it would save you around 4 hours. That is, if you don’t want to take the bus ride straight from Manila to Alaminos City.

From the Bus Terminals

The local wharf, Lucap Wharf, is just a 10-minute ride from the bus terminal. You can take a local tricycle to this wharf. Then, you can take an outrigger boat (an interesting ride) that would take you to the island of your choice.

In the wharf, you can inquire about your destination or about any information you want to get before setting out to the sea for your adventure or any activity you have planned alone or with a group or family.

Sulpot Island, Monkey Island, Abad Santos Island, and Hernandez Island are closer to Lucap wharf and only a 15-minute ride by motorboat. However, these islands’ facilities are limited since they are not developed to accommodate visitors who wish to stay longer – overnight or days.

The major islands that are developed and provided with proper facilities are the Children’s Island, Governor’s Island, and Quezon Island. It will take you around 30 minutes to get there by a motorboat.

Snorkeling. Yes, this is one of the best ways to enjoy swimming and observing colorful creatures under the sea. You can bring your own gears, but you don’t have to worry if you don’t have one – you can rent gears there.

Island Hopping. Yes, you can hop from one island to another – not on foot but by boat. This is the fastest method of seeing most of the beautiful mushroom shape islands that dotted the area. This is usually done by groups – the more the merrier!

Fun Fishing. You don’t have to be a fisherman (or fisherwoman) to enjoy fishing. You can do this while riding the boat. Or, you can hire a small boat to bring you to a best spot for fishing to reel in native fishes, and you can dip in the water from time to time.

Spelunking. If you are an adventurous person, this could be your place too. You need to hire a boat to take you to some caves and do your spelunking. Also, you can take the ‘floating tour’ and enjoy limestone formations, bat species, and other scary animals and critters inside. Just watch your head – you can wear a head gear.

For more details on the bus schedules, maps, among other information you need you may… 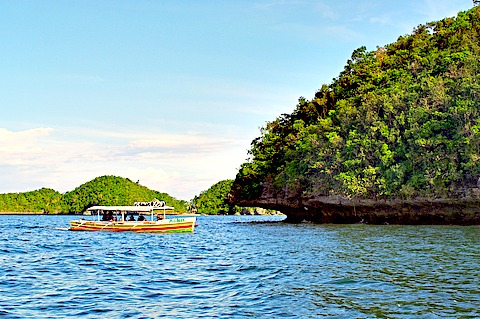