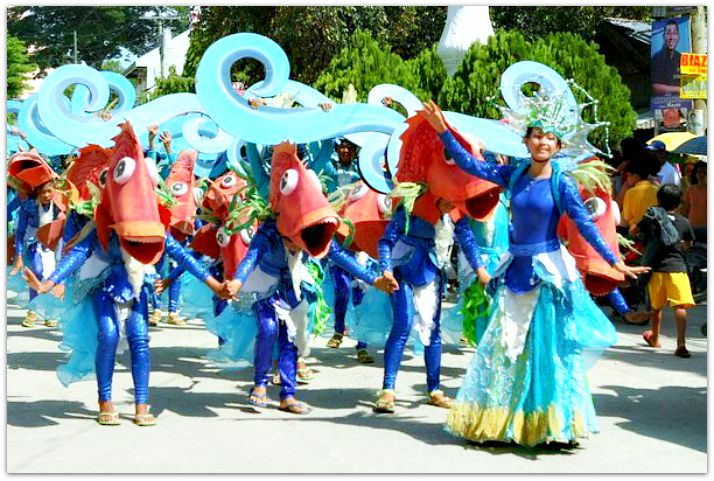 Kinsan Festival of Aloguinsan, Cebu, is an annual festivity that is especially held to promote mainly its Kinsan fish products.

This festival is held every second Sunday of June, which is the middle high season of this fish abounding the municipality’s seawater.

The name Aloguinsan is believed to be the name given to this town to refer to the head of this fish species.

Kinsan fish is a relatively big fish (a type of grouper), a foot-long and weighs about 3 kilograms – a weight that is considered not fully-grown one.

As held for the first time in 2006, Kinsan Festival is the first-ever held festival in the southwestern area of Cebu that focus on food, agriculture and other cultural heritage-related celebration (The Freeman, 2006/June9).

It is the town mayor’s positive and active response to the call by the governor to promote every town in the province by creating something that makes people aware about the area’s cultural heritage, natural beauty and resources.

Although the feast day of St Raphael the Archangel is on the 23 of October, the townsfolk celebrate their festival in June fundamentally due to the abundance of this fish during those months.

Not to coincide with the religious aspects of a town’s big celebrations is not the usual practice in most places in the country. For that reason, the case of Aloguinsan’s festival is quite unique if seem in that usual religious perspective. 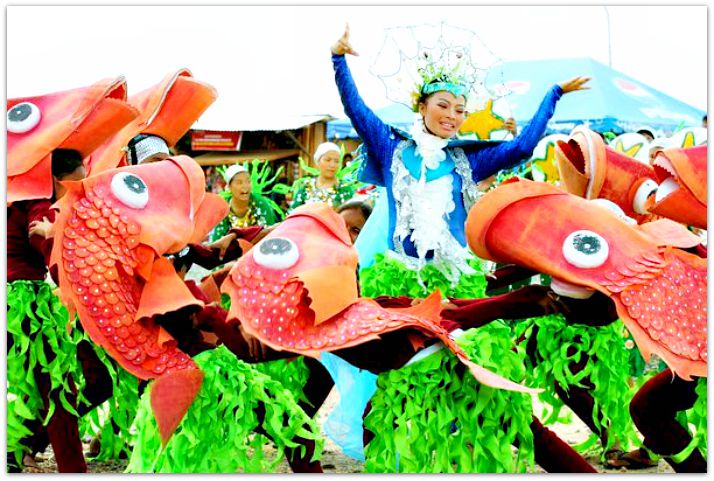 As aforementioned, Kinsan fish breeds well in this town’s waters and which are ready for great harvest in the months starting May to July.

The legend has it that the local who was carrying with him the head of Kinsan fish responded that what he is carrying is the head (‘ulo’) of kinsan fish, probably a clumsy response for misunderstanding the question.

From then on, that Spanish soldier spread the name of the place among its superiors and started calling the place ‘Aloginsan’ which is the combination of ‘ulo’ and ‘kinsan’ vocabularies. Quite a story, isn’t it?

There are lots of places and corners in the province that are unexplored and unrecognized.

Unfortunately, such places are less traveled and underrated. This means that although there are loads of travel, outdoor, food, culture and relaxation resources available in the province, they are not properly or well-documented and publicly exposed to the world.

So, with the encouragement from the officials of the province, promoting Aloguinsan through its available resources is a fantastic idea and a promising move. In fact, the festival is getting better and becoming popular year by year.

Kinsan food menu
One of the approaches taken by the officials to promote this town is through preparing Kinsan fish in various menu products.

During the festivity, you can see lots of kinsan food products being prepared by local gastronomic experts and chefs. Basically, they prepare the fish using the traditional way of cooking, such as boiling it and spread over it with various ingredients, among various culinary methods.

When you come and join the festivity, you will have opportunities to try and eat various menus for cheap prices (I suppose some would offer it for free, especially when you visit a friend’s house or your friend’s friend’s house!)

To promote further Kinsan recipes, the town officials try to publish it domestically through various means including the local media outlets.

Natural Beauty
Another means of promoting the area is through making people aware of the natural beauty endowed in the area to offer to guests from far places, including not only foreigners but also domestic or national visitors.

To make tourism more sustainable and environmentally-friendly, eco-tourism is studied and developed. Eco-tourism is now one of the programs that the local officials is highly supporting for and which actually sees promising results to the environment as well as job and income source of the locals.

Historically, Aloguinsan is also rich with stories and most of them are untold and needs somebody to uncover and tell them. Among the historical sites and attractions, Aloguinsan has the Batalyon Hill, Pinuti Lagoon, Bulwarte and Baluarte Park.

Okay, let’s now return to the festival and see what’s interesting about it… 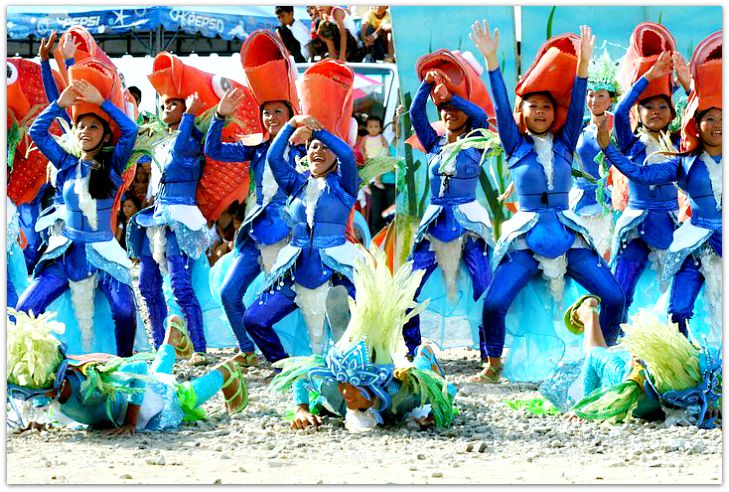 The Festival
Kinsan Festival has a lot to offer to locals as well as to guests from other places including foreign visitors. Some of them are the following…

Showcases
During the festivity, you can see lots of local talents being developed and tapped into to make each annual event more meaningful and appealing.

Street Dancing is one of the most interesting part or event. The locally-trained contingents (usually younger children and students from the local schools) are choreographed to perform enticing routine and dance steps with the beat of drums and homemade musical instruments such as bamboo drums.

This is a competitive show of talents and there are selected judges who would then pick their choices as winners. Generally, the competition judges use criteria including: costumes, choreography, originality, vibrancy and the overall impact of the performance per contingent.

Usually, there are two categories for such competition – elementary school level and open entry level.

Aside from the street dancing (or mardi gras), there is also a ritual showdown. This is done in a big hall or sports complex of the town wherein competitors show off their choreographed routine in front of the critical eyes and skills of festival judges and spectators.

As you have guessed already, the theme or motif of the whole festivity is Kinsan fish. For the street dances and ritual showdown, the performers portray the movement of the fish being intertwined with the livelihood and the daily lives of the locals.

Now, if you really want to learn more about this festival, come and see it in flesh. Some details about this municipality can be found here: http://www.dticebu.net.ph/mun_profile/aloguins.htm

Our site’s description of the town is also available here.

Thank you for visiting this page and website. Please, continue scanning the pages of this free travel guide of Cebu Province.

Have a great and festive day always!