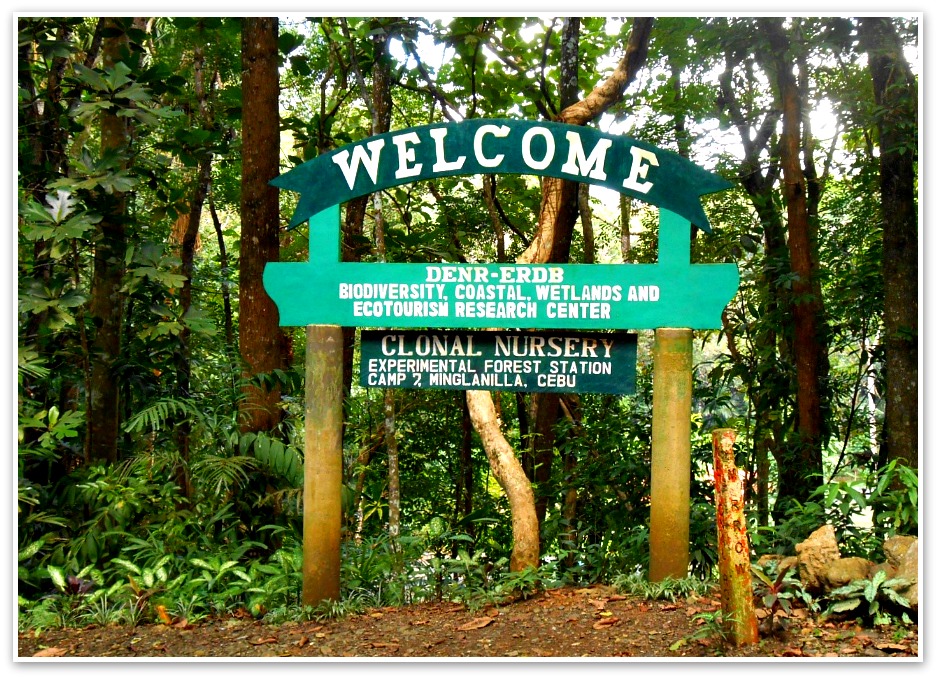 After a period of research and queries about this reforestation project in the municipality where I reside, alas! I have accomplished my goal to come and visit this ecotourism camp located in the uphills of Campo 7, Minglanilla on one cool Sunday noon. This is, for sure, one tourist destination when trekking and caving activities are in your bucket list.  Set your foot now on the grounds of Campo Siete in Minglanilla municipality.

Prior to my visit, I had a telephone conversation to a DENR staff and had gathered information about this ecotourism spot.  This is akin to the man-made forest in Bohol and is said to be the oldest forest in the country. This reforestation project was supported by the then President of the Philippines, Sergio Osmena with a meagre start up investment of P10,000.00.

According to my source, this area was destroyed by the quarrying and mining activities of the once renowned mining corporation in Lutopan, Toledo.  So, to restore the damaged forest, the Cebu Provincial Office in coordination with the DENR continued to discharge the visions for which this project has existed.

The facilities inside the compound serve as the demonstration and training center for the conservation and management of forest plantation, seed production area, cave and ecotourism and as field laboratory for environment and natural resources technologies.  Also, the Visayas Tree Seed  Center inside this clonal nursery stands to serve as laboratory testing and storage facility for quality seeds collected through the Visayas region.

Upon hearing all these, my interest in knowing more about it never diminished but it has instead been buried in my subconscious.
On December 11, 2016, off I went to Osmena Reforestation Project (ORP) riding a “habal-habal”.

While approaching the site, I could now see the towering trees along the sides of the road resembling the ambience of Baguio City. The atmosphere gets cooler as I was nearing the site. 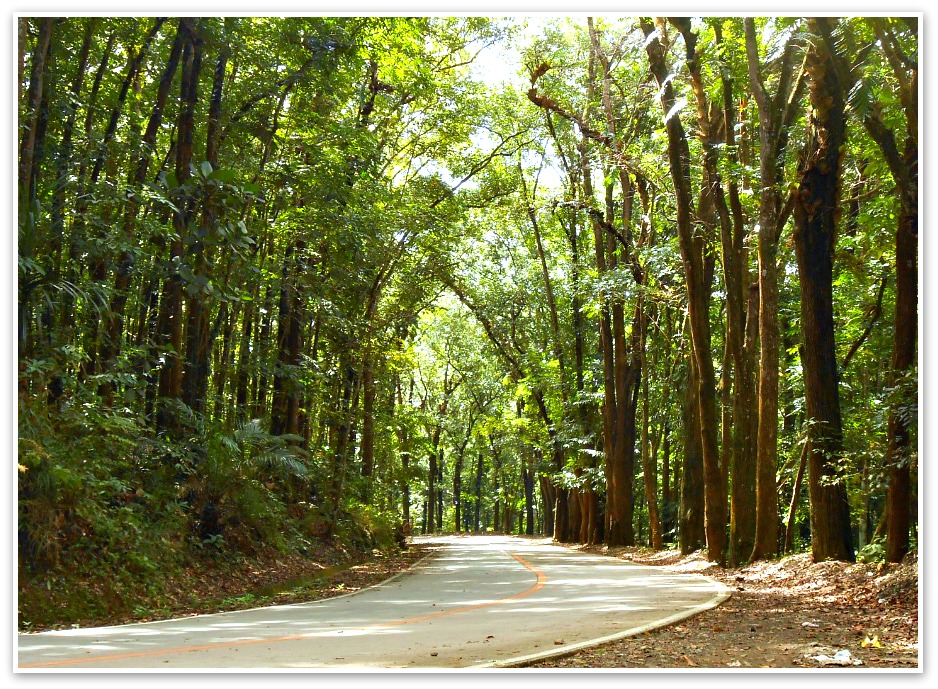 I noticed only two-wheeled vehicles i.e., bicycles and motorcycles, travel down the highway of Campo 7. I had also been told that bikers make their routes here owing to the smooth road and safety because big trucks and buses are not allowed to enter this way. 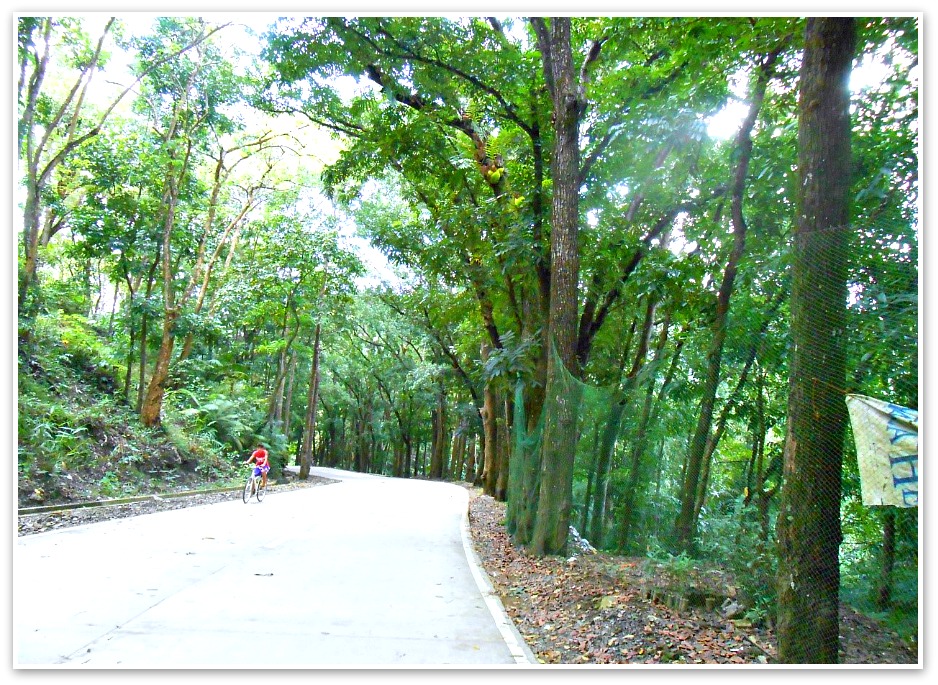 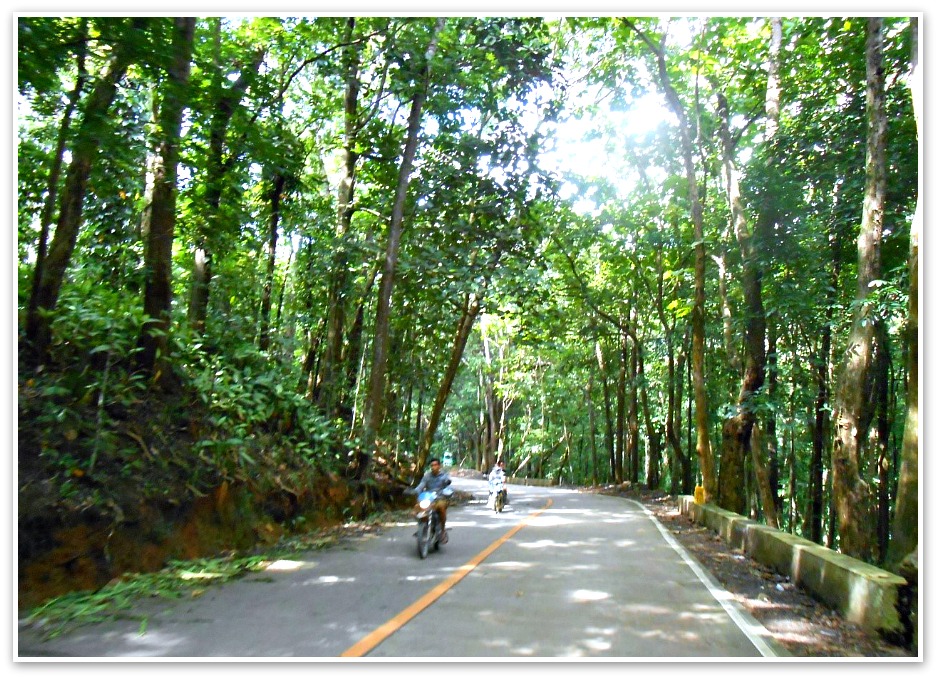 Even skateboarders come to this place to experience the thrill of downhill slopes as shown in this photo. 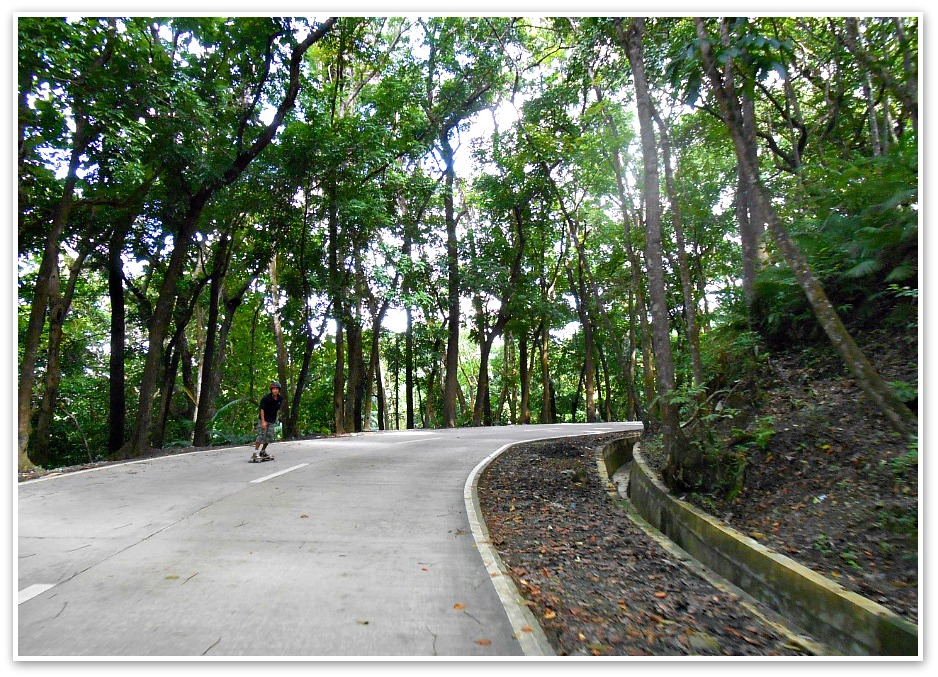 As I stepped down the nursery station, I could hear children shouting as if having a good time in the pool but I never bothered to go down any farther to see them because I was too amazed taking pictures of the trees and the cloning area.

This is the way down to the clonal nursery—maybe a four-meter height from top to bottom. 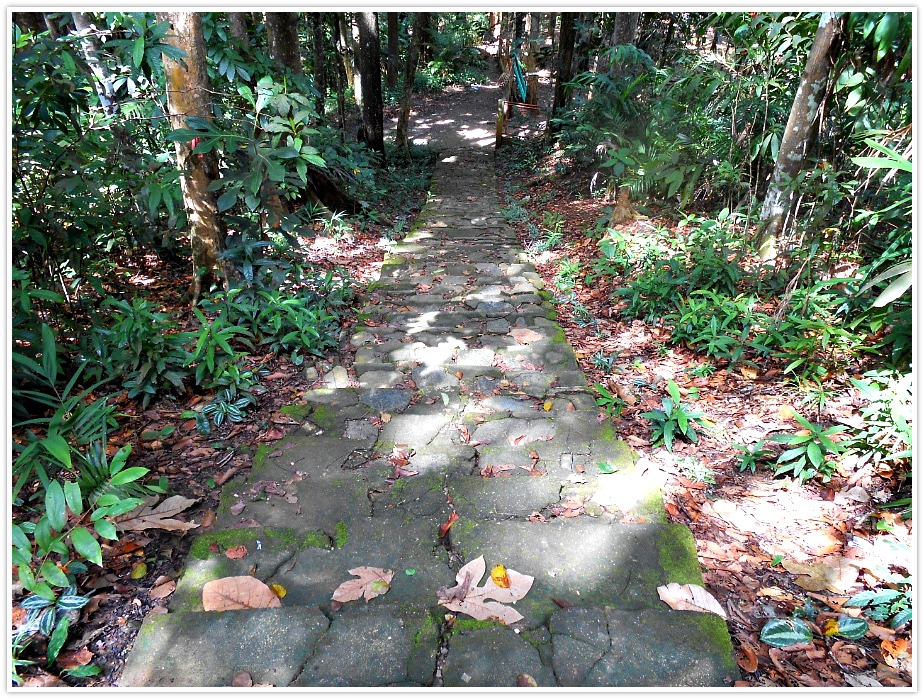 When I reached the bottom portion, I was reminded by the tale of little red riding hood surrounded by tall trees around me but grandma wasn’t there to save me from the pangs of the bad wolf hiding behind the trees and bushes.  Hahaha. 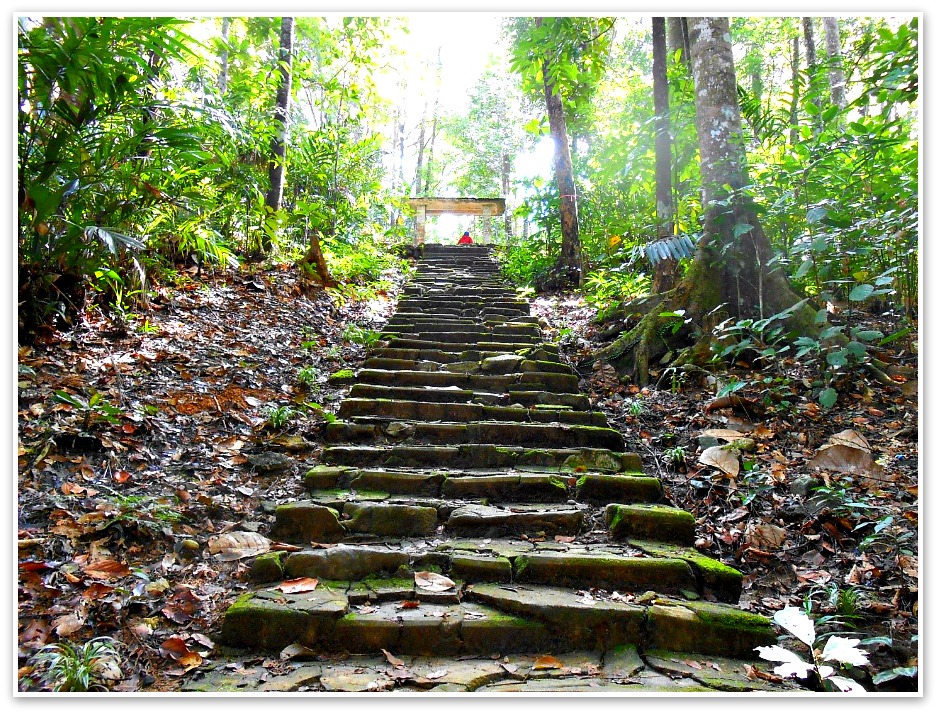 No, there are no wolves, of course, only towering trees! 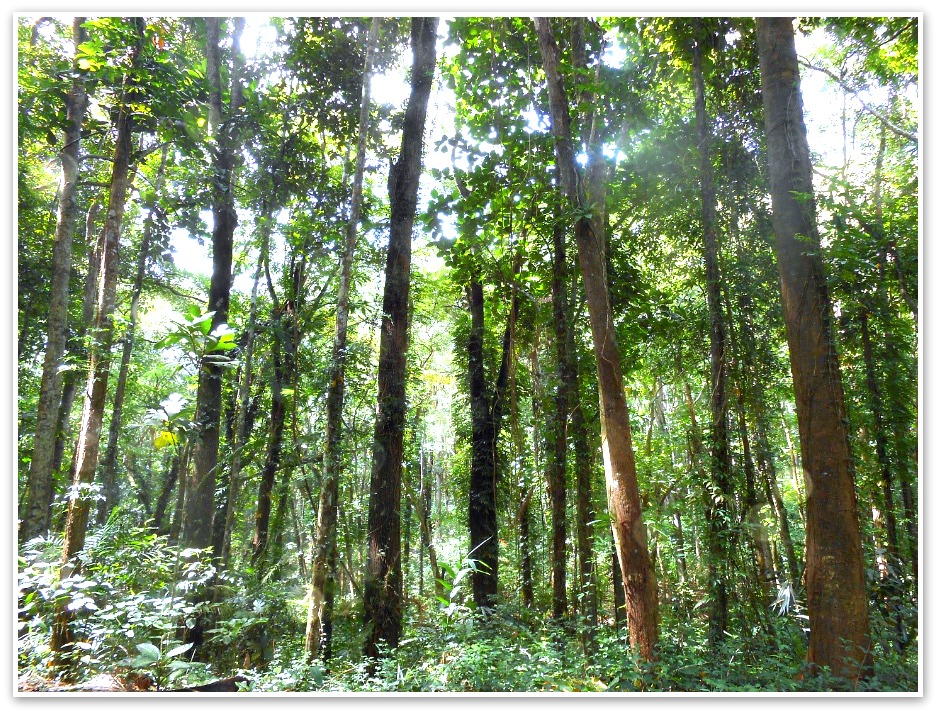 There's a path that leads to another barrio which is a walking distance away from this station.

I was looking for something familiar as I found from the internet--that old stone (now restored to look recent) which depicts the century old project of our then President Sergio Osmena.  But, my attention was caught by the trees tagged with their specific common names and scientific names written on a tiny piece of wood nailed on each of them.   These are only some of the trees that I found in the camp while taking my tour.  I did not go any farther because my intention was to only have a glimpse of what is so intriguing about this Osmena Reforestation Project. 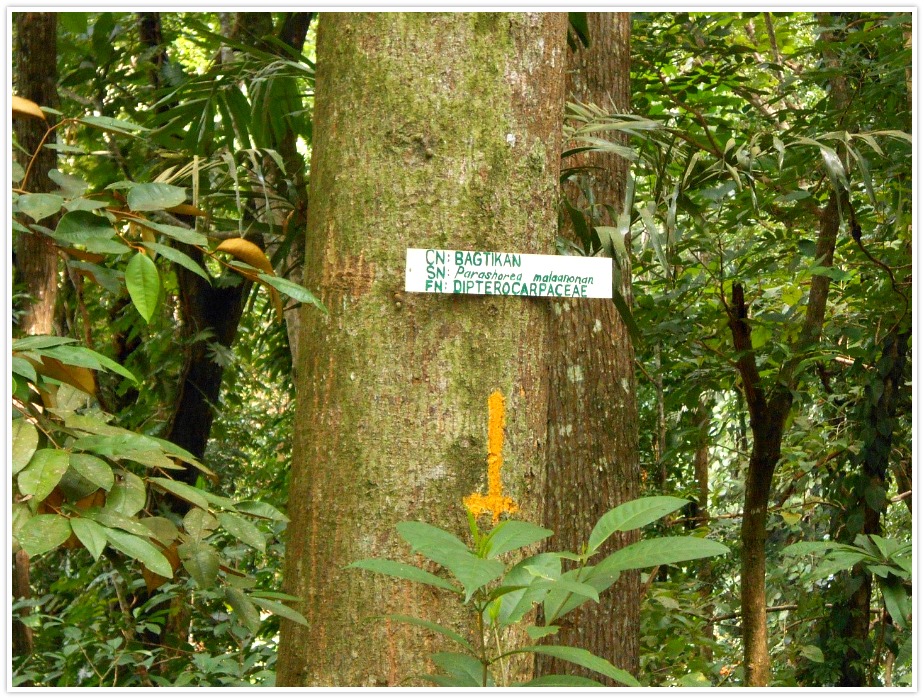 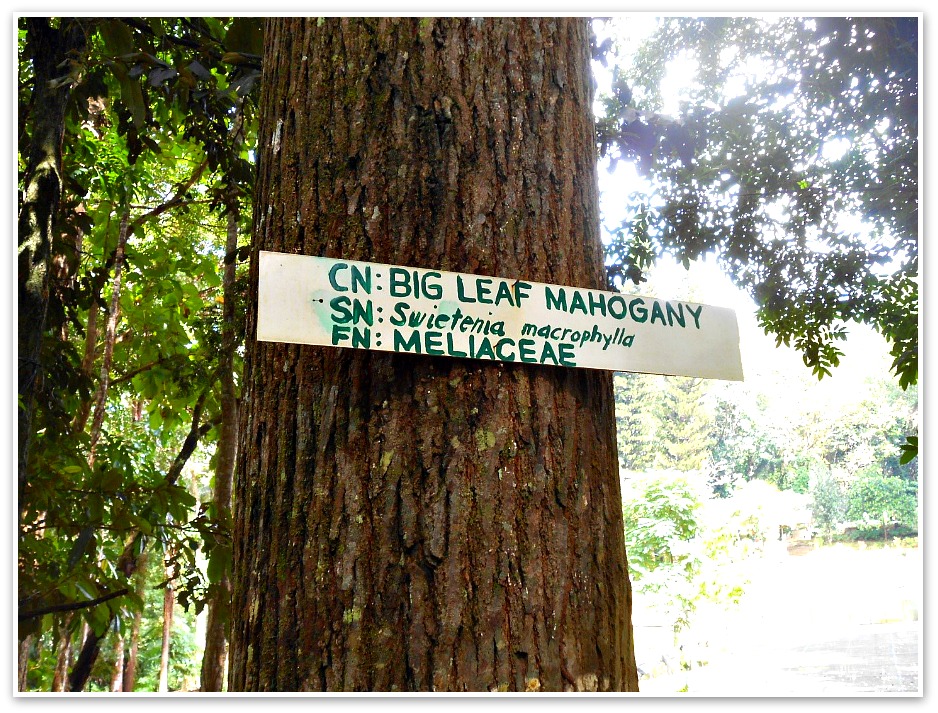 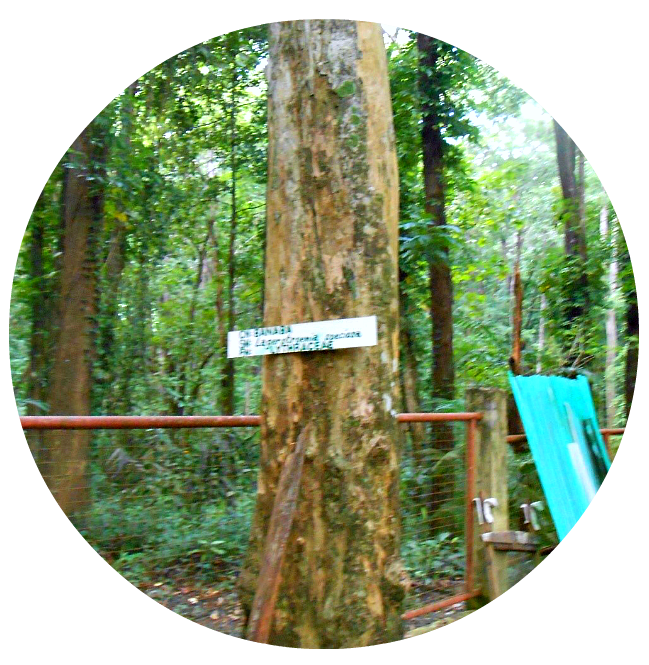 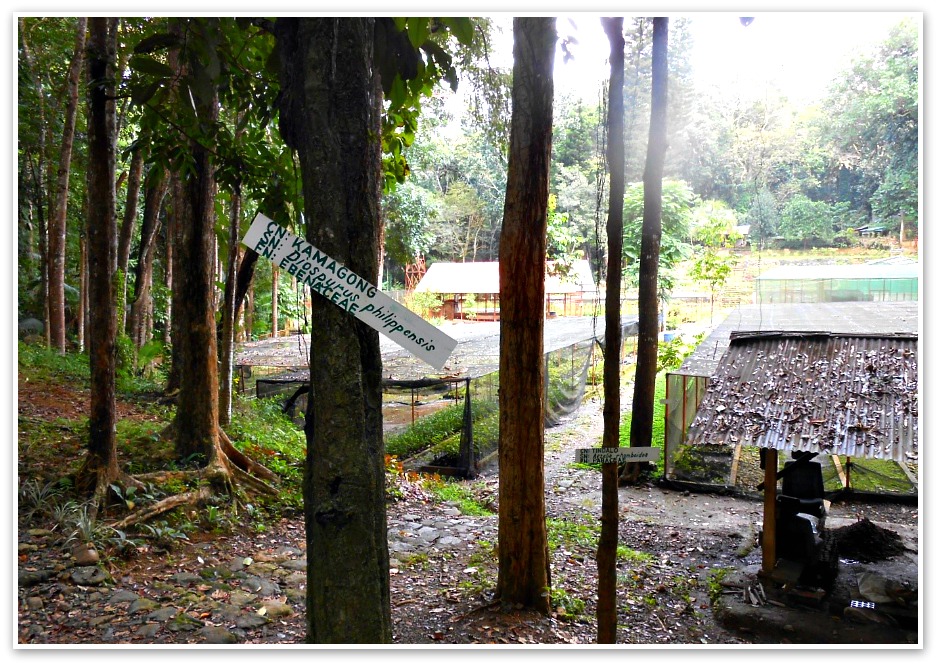 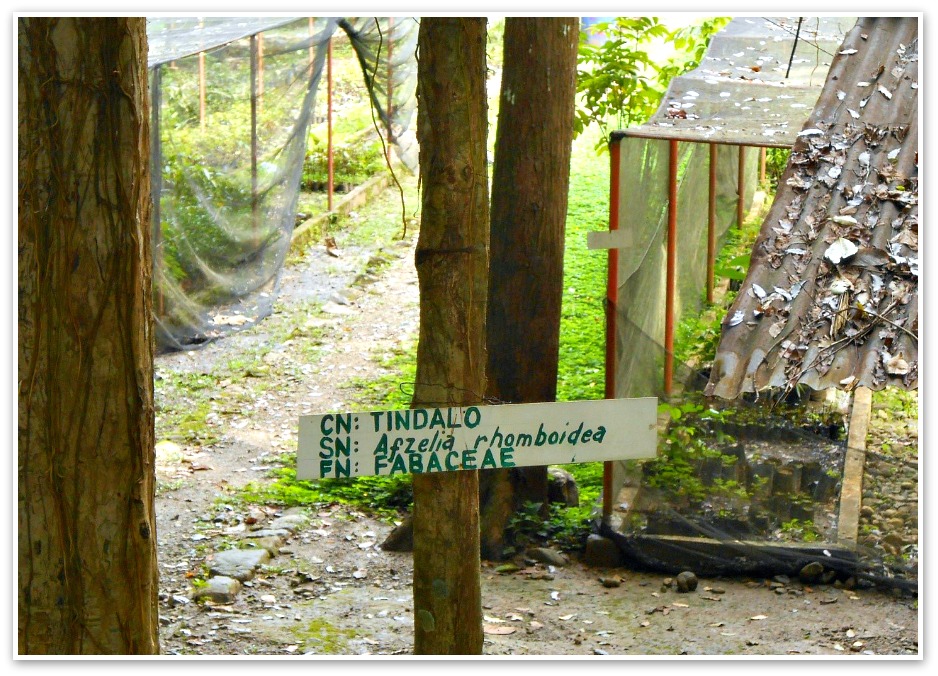 As I was enjoying my time taking my shots, a man appeared from the house (staff house I suppose) inside this compound.  I called him out and asked politely if he could spare a few minutes answering my queries about this nursery. He willingly acceded to my request.

This person is Adventor Rico.  He has been a caretaker of Osmena Reforestation Project for 13 years.  There are six of them taking turn while staying in the staff house, looking after this conservation scheme actively being developed by the Department of Natural Environment and Resources (DENR). 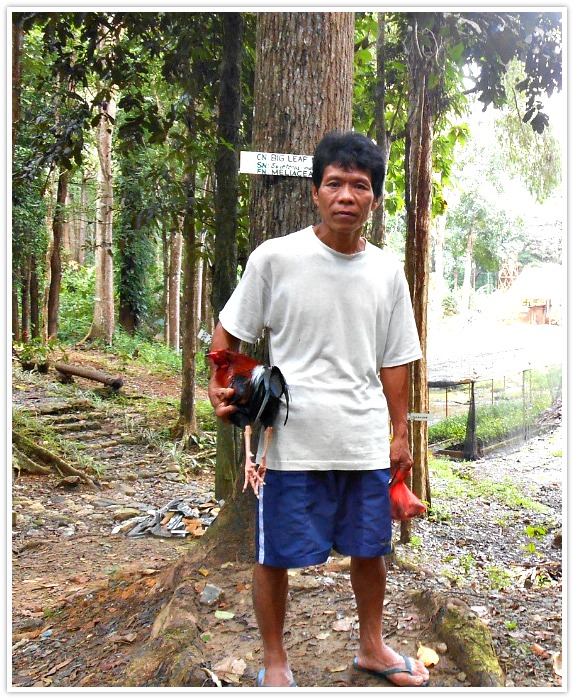 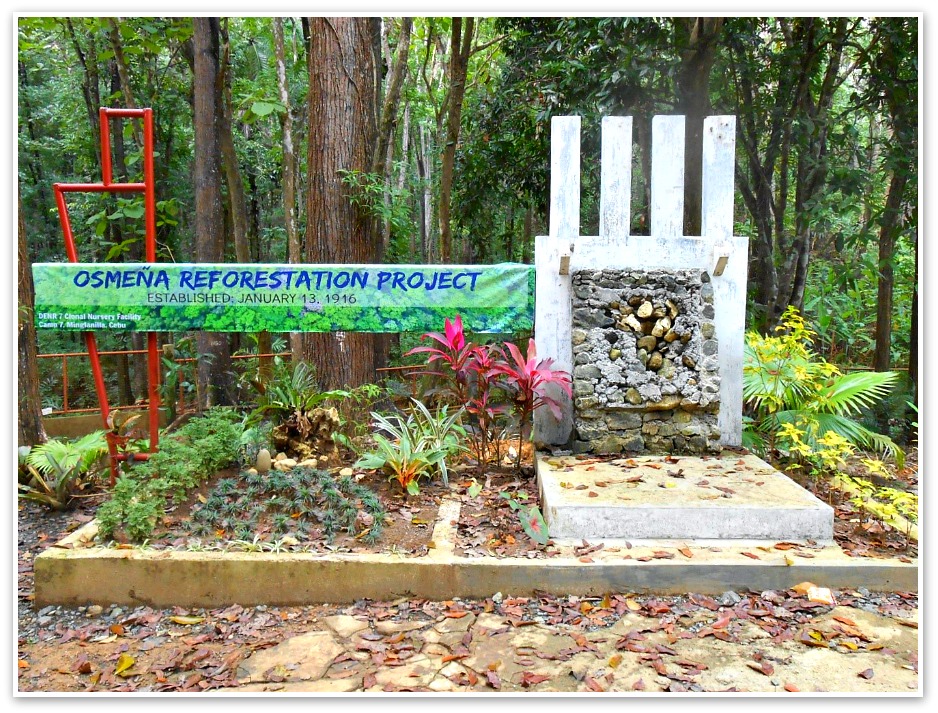 This year, 2016, marks the century old project of the late “Serging” (Sergio) Osmena, as he was popularly known by the Cebuanos.  In this 123.4-hectare of land, the clonal nursery grows small cuttings of giant trees like mahogany, tindalo, cinnamon, narra, kamagong, cocoa and such Philippine hardwoods.  He demonstrated that the stem of this cinnamon tree is cut at the middle and placed in a tiny bag with soil.  Such as this: 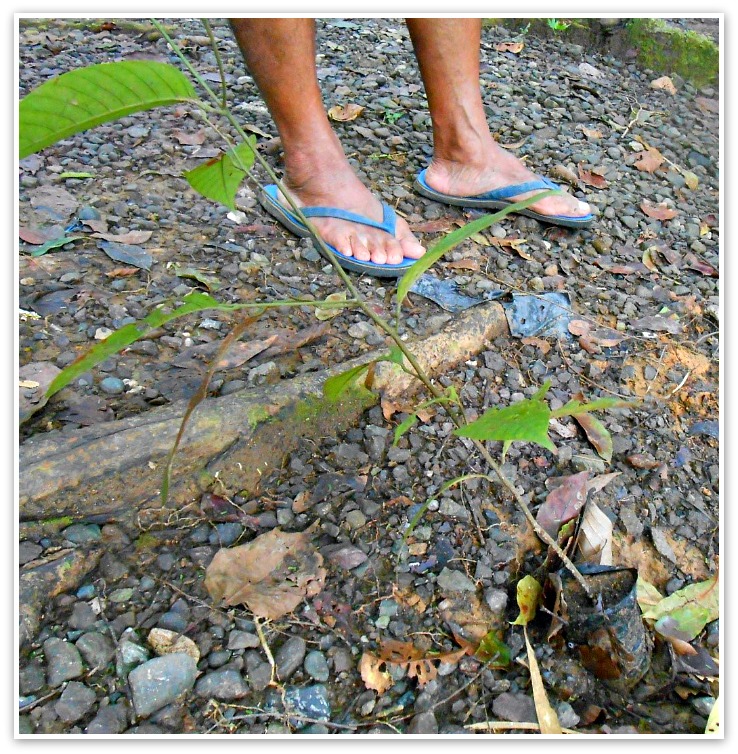 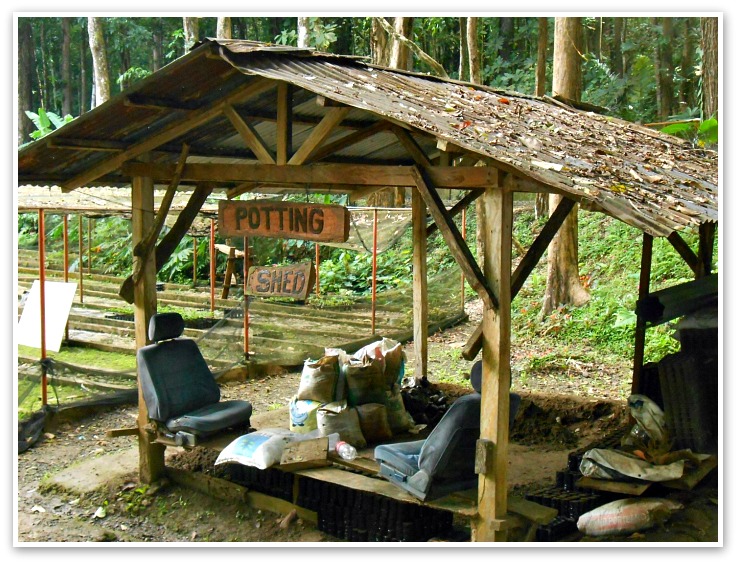 The process of bagging these stems and seeds are done in the potting shed.

Thereafter, these black bags are placed under the netted garden for sun exposure. 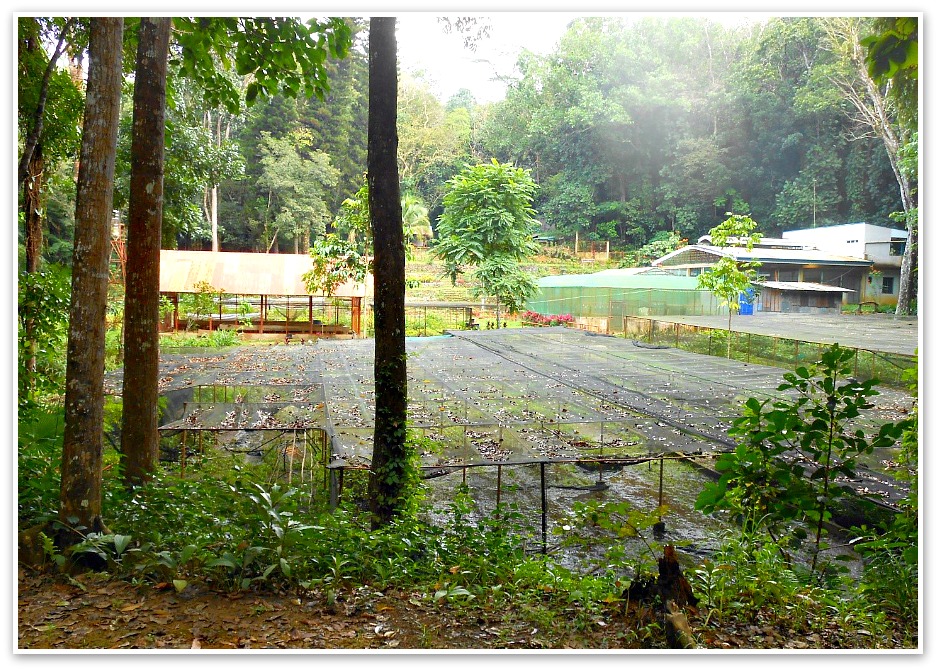 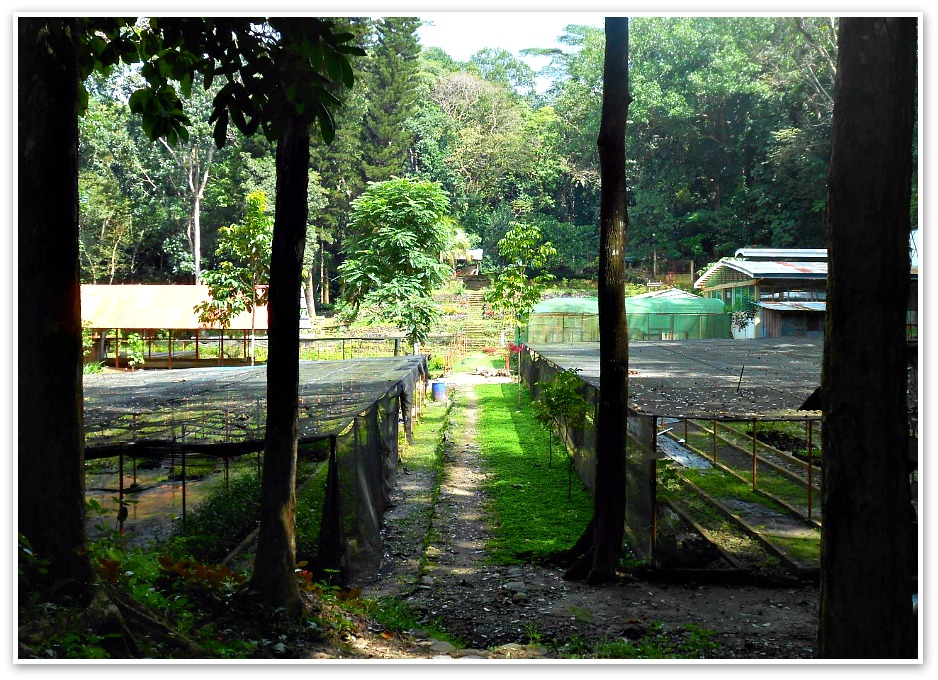 The theory, as narrated in the internet, didn’t mean anything to me until this ordinary man explained in the dialect and demonstrated the value of this project in simple terms. It was only then that I understood the significance of this reforestation project.

Those plants in small black bags under the nets are cuttings of the big trees.  There are also seeds in those bags for production.  When these seeds have grown to a desirable height, the CENRO gets them and distributes them to many parts of the Visayan Regions.

Not only did I find tall trees there but also blooming red anthurium. I am certain when these plants grow in numbers, they will accessorize the whole area making it look like the Garden of Eden in the woods. 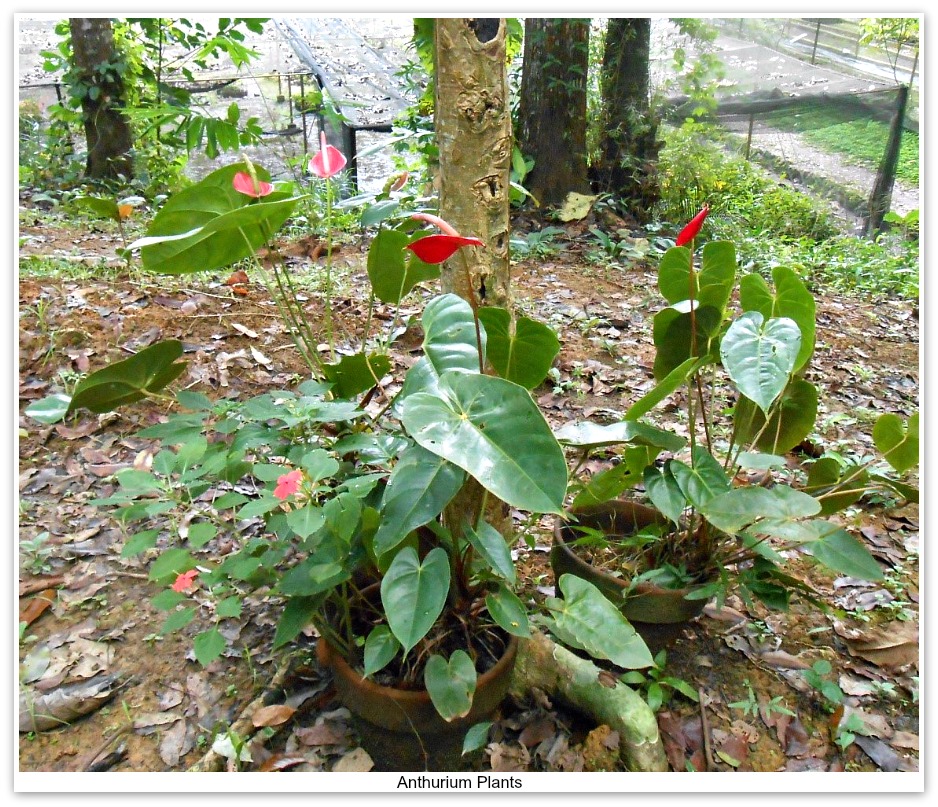 I know for sure that I could have discovered more in this place but for threat of landslides due to heavy rains, I decided to end my exploration.  Maybe in my next visit, I will explore the caves as popularly published on the internet—the Seven White Caves in Minglanilla.

The support of the provincial government in maintaining and preserving the environment is most needed. While we aim to develop our furniture industry, we, as a people, must be responsible for our environment.  We cannot do away with the making of furniture and in so producing these items, woods are the needed materials for its production.  I believe the responsibility lies in the replanting of seedlings or the cloning process of giant trees just like what Kuya Ventor is doing.  Hence, let us support the Osmena reforestation project of the provincial government of Cebu.

We can support such projects in many ways, such as visiting this place, spreading the news about tree-planting, or, you can start planting your own trees. I don’t want to lecture on the advantages of trees, such as preventing soil erosion, because we all know them. However, aside from those reasons, the earth needs more carbon sinks (like trees, marsh areas, etc.) so that the recent hot temperature will lower down and keep our only world in a stable temperature.

Now, let’s go…plant more trees and save the earth!

Last, a big congratulations and a happy Century Anniversary to this project (1916-2016) and everyone involved in this endeavor. Keep it up!