Cebu Sinulog is one of the most awaited and popular annually celebrations on Cebu island. Most spectators or this event come from all over and from outside the country.

It is a colorful, vibrant, cacophanic but heart-beating and exciting celebration.

Usually, Sinulog is celebrated for nine days that culminate on the final day with a Sinulog Grand Parade.

A day before the grand parade, a Fluvial Procession is usually held at dawn using a motor boat loaded with hundreds of flowers, candles, and the Santo Nino (Child Jesus) on top of them.

The Fluvial Procession starts from Mandaue City (City beside Cebu) and reaches until the Basilica Minore del Santo Nino, where a re-enactment of the island’s Christianization will be performed.

In the afternoon, most of the main streets of Cebu city are blocked from vehicles to operate so that a more solemn procession can take place which could last for many hours with a large crowd joining in.

Sinulog celebration in Cebu has grown which has its own roots in the Philippine popular piety in devotion to Santo Nino (Child Jesus). Since 1980, the government of Cebu City organized the Sinulog Festival and provides rewards for those who can perform more meaningful expression of the devotion through tribal dances, which are usually done by groups.

Some government cultural and sports ministries supported such festival to promote not only the religious aspects of the event but also in order to encourage the participation of school officials, students, religious communities and other groups who might be interested to participate and perform in the celebration.

The festival is being done by young students and adults who usually prepare and develop their dance step techniques and costumes for a year or months before the event. It is a tedious and time-consuming task and dedication for the performers and directors to endure or enjoy with.

Each participant groups must perform well with unique dance formation and techniques, dress up colorfully, beat the drums and other instruments vibrantly, expressive enough depicting both historical and religious context, and must be convincing enough to both the spectators and judges in order to get a prize. 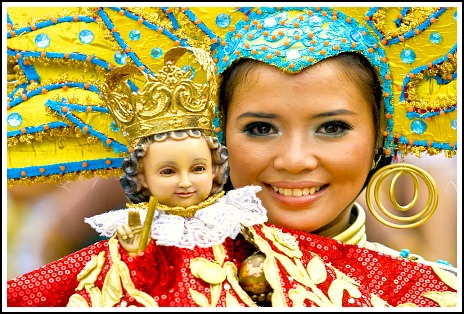 The most important aspect of Sinulog is its dance step. The word itself comes from Cebuano adverb ‘sulog’, which means ‘water current’. Combining both the root word ‘sulog’ and the prefix ‘si’, ‘Sinulog’ would mean imitating or performing a dance step like the water (river) current’s movement.

The movement, though not literally like a water current in a river, is a forward-and backward movement. Sinulog dance consists of two steps forward and one step backward accompanied by the beating of drums. It is usually a free interpretation dance but must have those basic steps in order to be called a sinulog dance step.

When you visit the Basilica or the Magellan's Cross, candle vendors will dance it for you accompanied by their native religious song as they pray and offer your prayers to the Child Jesus. 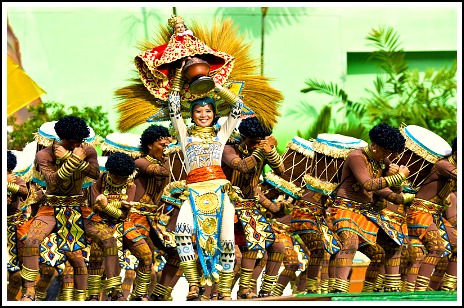 Legend or Origin of Cebu Sinulog

The dance step of Sinulog is thought to be originated from Rajah Humabon’s adviser – Baladhay (Wikipedia.com). The legend has it that when Baladhay got afflicted by a sickness, the rajah commanded his people to bring the sick into a room where the Santo Nino image with other indigenous images were enthroned.

Few days later, people heard Baladhay shouting and seen dancing and recovered from his illness. When questioned what happened, Baladhay described that the child (Santo Nino) tried to wake him up by tickling him with a coconut husks. Some who claimed who saw what happened said that he danced with the steps like the current of water…

When the Portuguese explorer, Ferdinand Magellan, arrived on the island on April 15, 1521, he presented the image of the Child Jesus to the King’s wife, as a gift for accepting Christianity. The king, Rajah Humabon and queen Hara Amihan, who later became Queen Juana were both Christined. 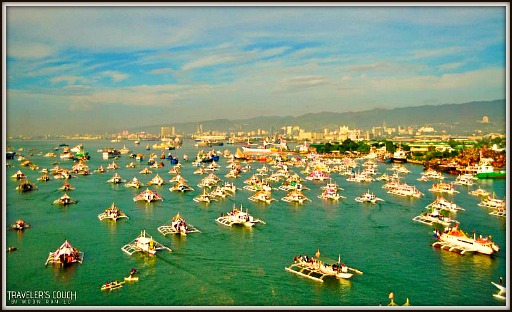 Most devotees of the Child Jesus believed that the image has a healing power or miraculous effect to those who perform the dance or pray infront of the image. Among others, the image is thought to drive away evil spirits and other demons that can cause sickness.

In addition, the image is also believed to give protection, prosperity, and luck (or blessings) to those who put up (enthrone) the Santo Nino in their cars, jeepneys, stores, commercial establishments, schools, houses, and other special sacred places.

Cebu Culture - Tells something about some common and popular practices and activities of Cebuano people. This includes a glimpse of their language, dances, traditions, etc.

Cebu Customs - Introduces you to some of their practices which they passed on from generation to another which are both indigenous as well as Christian traditions.

Cebu Quirky beliefs are also interesting topics which are products of both native and religious beliefs still in existence.