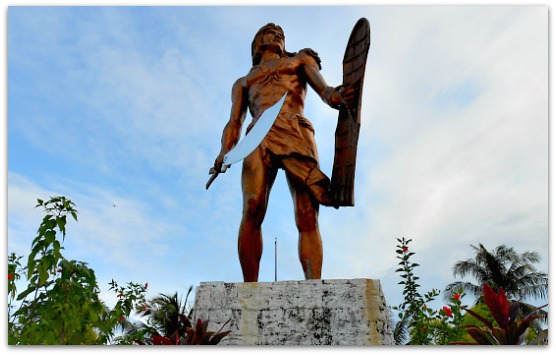 Kadaugan sa Mactan (or the Victory in Mactan) is a celebration reenacting the victory of Mactan people (Oponganons) during the famous “Battle of Mactan” in the 16th century.

This major attraction among local and foreign spectators is being organized by the local government of Mactan Island. The re-enaction of the event is the main event of this celebration which is played by famous local actors or other personalities.

The organizers does not only use this celebration to boost the place for tourism but also encourage the locals to rethink about the message of victory and the challenges of time, especially in terms of facing issues of livelihood and leadership in the area and the country as a whole.

The bloody Battle of Mactan took place in April 27, 1521 when the iron-clad soldiers of Ferdinand Magellan reach the shores of the island but was fiercely confronted by Chief Lapu-Lapu and his fighters.

During the confrontation, the Portuguese explorer lost the battle and met his fate together with most of his soldiers. Most historians have agreed that the event actually took place and there is no doubt that it happened.

Since in 1981, this re-enactment of the event is being performed annually on the same day – April 27 – as recorded in history books. Actors (and actress) play the main roles of Lapu Lapu and Reyna Bulakna, the wife of the chieftain and Ferdinand Magellan.

In the earlier re-enactment Kadaugan sa Mactan, it was commonly called ‘Bahugbahug sa Mactan (or Melee at Mactan) in local language. It was thought that there were 3 ships of Magellan moving up towards the beach of Mactan. That’s where Lapu Lapu and his fighters fiercely fought against them resisting their coming.

It is right on that beach that this famous “Battle of Mactan” occurred and recorded in history books. 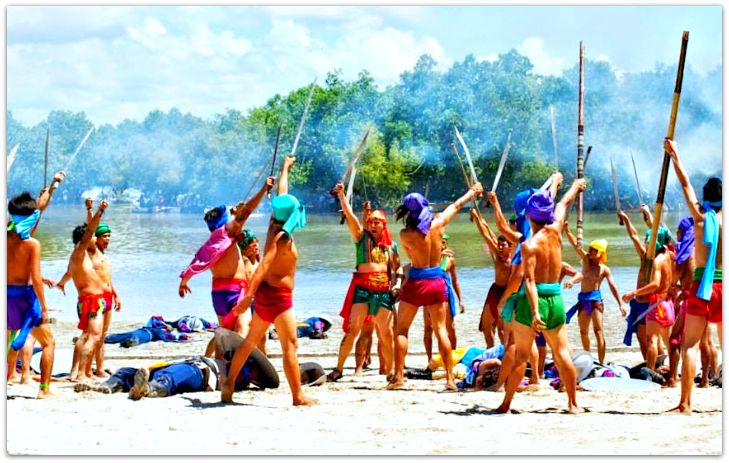 The re-enactment of the bloody event is usually started from the planting of Magellan’s Cross up to the victory of Lapu Lapu on the island.

The battle in the re-enactment commences when there’s high tide and as early as 8 in the morning. That’s because it was believed, and logically so, that Ferdinand Magellan's fleet reached the shore during this time of day.

Local talents are usually being employed to play the roles of the important figures in the event. The most important roles are those for Lapu Lapu, Reyna Bulakna (Lapu Lapu’s wife) and Magellan.

Most often, professional domestic and local actors play those roles.

However, some popular figures are also casted to play them. In 2008 Manny Pacquiao (boxer) took the role of Lapu Lapu, Jinkee (Pacquiao’s wife) took Reyna Bulakna’s role, among other roles. 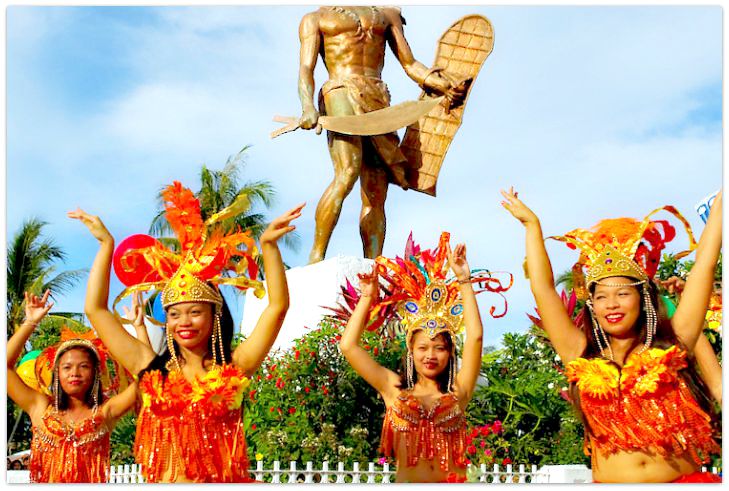 Relevance & Message of the festivity

What I found interesting in this annual event is not just the re-enactment of the historical facts and figures as recorded, but also the relevance and what it means today about the event to the present predicament of the people, especially among the locals and Filipinos in general.

In one of the events, the mayor of the city gave an inspiring and awareness-raising speech during one of the occasions of the celebration.

In particular, the official mentioned that the recent fight in the society is the battle we are facing against graft, corruption and self-interest. This is a very relevant message to the people especially that the country’s major problem is exactly this issue.

The mayor also added that to fight for a better life “Let us fight a good fight – for freedom, for good governance and for a truly sustainable development that is inclusive” (www.sunstar.com.ph/2015/04/27). Couldn’t agree more!

Now, after those serious lines, let’s check out some line ups of the event and see some interesting parts. Here we go…

As the years go by, Kadaugan sa Mactan or Bahug-bahug sa Mactan has grown and become a fully-blown and interesting celebration. It attracts both local and foreign visitors due to its various and colorful aspects.

Just recently, the local officials organized the establishments and other participants to install food stalls to showcase the best cuisines and local food products right at Mactan Shrine where the event took place in the 16th century.

Food Festival
Aside from this showcases, there is a food festival wherein people can enjoy local food, drinks and sightseeing of Mactan Island.

The food that are available for purchase are mostly local cuisine and the popular ones. However, since there is always a mixture of various regional and international cuisine in the local culture, most Filipinos love a combination of food from different cultural backgrounds.

So, you can find food from other Asian countries, such as Chinese, Thai, Vietnamese, Japanese among others. Of course, influences from Western and European countries are obviously visible, such as spaghetti, stakes, sausages, and more.

If you love parties, you might enjoy the three-night street party that is also organized by local officials in collaboration with the local residents, public and private sectors and communities. Recently, the Kadaugan sa Mactan Street Party ran from April 24-26.

Part of the whole celebration is this Rampada sa Kalsada (literally means “rampage on the road/street). However, the expression itself has nothing to do with violence or riot at all; in fact it is the opposite. It simply implies that the event is totally entertaining, filled with ‘loud’ music, crowded and looks disorganized since everyone can enjoy eating, dancing, etc.

This event showcases a long stretch of entertainment stations that include food shops, kiosks, disco stations and other resources available for this rampage.

However, if we take that word literally, it would refer to the battle itself that led to the victory of Lapu Lapu over Magellan!

Showdown
In one of the days during this festivity, the locals call the colorful and vibrant presentations of choreographed dances a showdown.

It takes time to preparation participants for each group of presenters to be qualified to participate at this event. Usually, professional dance teachers are being hired to train and choreograph young people for the contingents.

Most often, there will be more than ten (16) contingents from various barangays of Lapu Lapu City, Mactan Island. Also, there are two categories for this competitive showdown. There is a barangay category and an open category.

The winners, of course, are reward most often with cash prizes which will be used then to support any project or program of the winners. The prize will also cover the costs for costumes, props and other expenses incurred before, during and after the whole event.

Lapu Lapu Mactan Shrine
Right where the battle was fought stands a statue of Chieftain Lapu Lapu. In this park and shrine you can also find a monument that honors the Portuguese Ferdinand Magellan who is instrumental in bringing the Christian faith to the island.

More details regarding Mactan Shrine can be found through this sites page link.

Great thanks for reading to this end this page. Hope you are enjoying it and the event if you have already done so. If not yet, then try to see or join in any of those mentioned above.

Have a festive day!