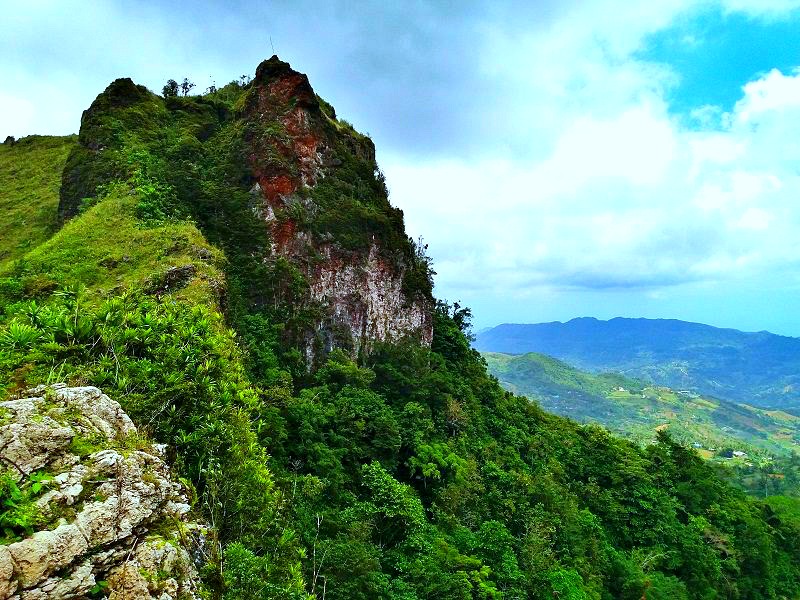 Linguistically speaking the word, ‘kandungaw’ can be coming from two root words ‘kan’ or ‘kada’ (could mean ‘to do’ or ‘whenever you do…’). Moreover, ‘dungaw’ simply means ‘to look down.' Therefore, when you combine the two words, it could mean “whenever you look down” below from the top of that mountain.

I guess that interpretation makes sense because ‘kan’ matches well with ‘dungaw’ if you mean to say that it is scary alright whenever you to look down from the peak of that mountain.

Anyhow, Mount Kandungaw is seating between the highlands of Dalaguete Municipality and Badian Municipality. Between the two municipalities is the pinnacle and popularly called as the Kandungaw Peak.

Kandungaw Mountain has many peaks and has beautiful summit sierra – a long and jagged mountain chain. It is considered the second highest peak in the area after Osmena Peak (or Labalasan Mountain) in Barangay Mantalongon in Dalaguete.

The other highest point is a cliff drop that looks like a stone wall. Yes, it is certainly high that it is not advisable to look directly from right beside the wall especially when you have a fear of heights (acrophobia in the Greek language, meaning irrational fear of heights). You can already see the walls while on your trail.

Kandungaw Mountain’s summits are mostly cone-shaped if you compare with Mantalongon Mountain’s sharp peaks. The famous cone-shaped mountains (and hills) are the Chocolate Hills in Bohol Province.

Campsite
The campsite is strategically located right between the mountains where a lee (sheltered side or the part away from the wind). Viewing the surrounding mountain range is breathtaking from the top of Kandungaw Peak.

You can get to Kandungaw Mountain from various points of departure, but the best point is through Barangay Mantalongon (famous for fresh vegetables) in Dalaguete Municipality.

(it is the same point where you can reach the highest peak in the area called the Osmena Peak – another famous mountain range with sharp peaks).

Go to Mantalongon Market (you will see lots of fresh veggies) approach a habal-habal (single motorbike) to bring you to the jump off area at another barangay called Maloray (Maloray is also famous for its vegetables and popular for its strawberries – organic strawberries, veggies, and herbs).

From there, it can take about an hour to the peak and indeed depending on your speed as well. From the ‘stairway to heaven,' you will be trekking the rolling and rugged terrain, but you might get comfort from the green and fresh-looking vegetable being grown by the locals (by the way, the area is known for its vegetables, and it is popularly called as ‘vegetable basket of Cebu.'

Now, the real challenge during your approach is your steep assault on the rocky parts by the ledges of the mountain. You need to conquer this challenge if you want to reach the shoulder part of Kandungaw Mountain.

For safety measures, it is advisable to come in groups and not solo flight. Hiring a local guide can also be the best action plan, that is if you do not have anyone on your team who is familiar or expert on mountaineering.

There is now an entrance fee when climbing the mountain (PHP30.00). The camping fee is PhP50.

Have the best travel in your life!