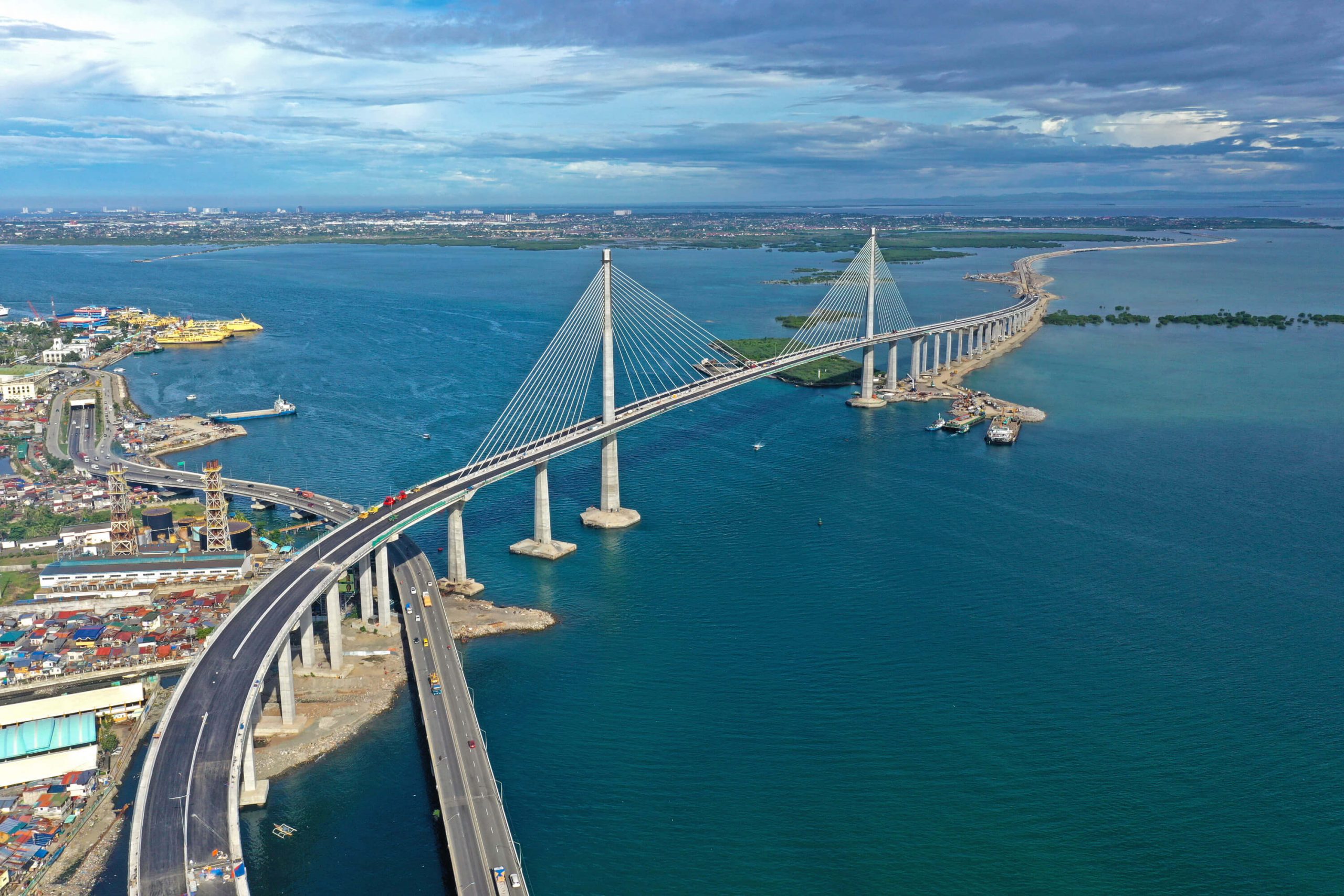 The newly-completed Cebu-Cordova Link Expressway (or CCLEX) is not only an artistic and valuable bridge but also a new attraction in Cebu and Cordova cities.

CCLEX is a monumental project that takes advantage of the recent engineering feats in this century.

As a newly-built structure, the Cebu-Cordova Bridge is now considered the longest bridge in the country spanning over 8 kilometers from Cebu City to Mactan Island in the province.

Cebu is considered the cradle of Catholic devotion in the country. And the creation of this bridge seems to be paying homage to the island's deep Catholic roots, as highlighted in a lighted cross on the twin tower cable-stayed main bridge.

The original completion target of the bridge was to celebrate the 500th anniversary of Christianity in the Philippines - on March 16, 2021. However, due to some delays, the completion and inauguration happened a year later (2022).

There are two significant purposes or advantages of this bridge.

First, the movement of people to and fro between the two cities is made more comfortable - travel shortened.

This is incredibly practical among daily commuters and travelers arriving or departing at Cebu-Mactan's domestic and international airports.

Second, this bridge will help improve the movement of goods, thus contributing to both cities' economic and social development. This is a piece of great news among businesses that transport products to and from both cities.

The Cebu-Cordova Bridge has two wide lanes in each direction. It also has an on- and off-ramps connection to the main bridge to the Cebu South Coastal Road (CSCR).

It also functions as a viaduct that levels down to a causeway in Barangay Pilipog, Cordova municipality.

To allow the ship to pass through below this giant bridge, it is built with a navigational clearance of 51 meters for shipping traffic, high enough for cargo and cruise ships to get through.

The toll expressway is designed and built to serve more or less than 50 thousand vehicles daily and allows speeds from 80 to 90 kilometers per hour.

As one of the country's largest infrastructures, CCLEX was implemented by the Cebu Cordova Link Expressway Corporation (CCLEC).

The corporation collaborated with the Municipality of Cordova and the Cebu City government.

CCLEC envisioned that this new bridge would help ease the bad traffic congestion and capacitate the network of roads in Metro Cebu.

Ultimately, CCLEX will "spur economic growth and boost[ing] investments" throughout the Visayan and surrounding regions, not only Cebu Province.

Cebu-Cordova Bridge Serving as Expressway
Yes, structures and bridges like this linking Mactan Island and Metro Cebu should help improve both business and peoples' lives living and working on both main islands.

This bridge provides Cebuanos and guests the best and fastest road to traverse the two places as a toll expressway.

Being a brand new and well-built expressway, motorists and passengers alike should enjoy a comfortable expressway that is well-maintained and provide more services, including safety insurance to every user.

Some specific features include:

Also known as the Cebu-Cordova Bridge and the 'Third Bridge' of Cebu is 8.9 kilometers long and a toll bridge expressway.

This bridge cuts across the Mactan Channel. It is the third bridge that links Cebu City and Mactan Island. However, it is the first link between Cebu City and Cordova.

The mayor of Cordova proposed this project to connect the municipality and mainland Cebu City. This proposal surfaced during Benigno Aquino III's administration and was put forward by Metro Pacific Tollways Corporation (MPTC) in 2014.

After more significant research and study about the proposal, the local government units of Cordova and Cebu City agreed on a public-private partnership (PPP) with Metro Pacific Tollways Development Corporation (MPTDC).

The commencement of CCLEX's construction was finally announced in 2017 when the funding issues were resolved.

The MPTDC was responsible for the construction, financing, and operation when completed.

Although not completed yet, the bridge played a part in the 500th anniversary of Christianity's arrival in Cebu. During the celebration, eight ecumenical 'iconic crosses' were planted on the bridge's two main towers.

The crosses started giving light on April 15, 2021, a month later than the expected date of its completion.

Finally, the bridge was inaugurated by former President Duterte on April 27, 2022. The event coincided with the 501st Anniversary of the Battle of Mactan.

The formal opening happened three days (April 30) later when motorists were allowed to pass through this new and first expressway built outside of Luzon island.

The joint venture between ACCIONA (Spanish firm) and First Balfour and DMCI philippine firms constructed the Cebu-Corodva Bridge. The expressway is not only long (8.9 kilometers) but also wide-spanning 27 meters wide, serving at least 40 thousand vehicles a day.

A toll plaza was built on an artificial island to serve as the toll collection point of this expressway. The following are the fixed rates per vehicle's features:

The plan is to extend to Lapu-Lapu City and build a direct link to Mactan-Cebu International Airport.

This plan will add 5 to 8 kilometers to the expressway that will need between 10 and 15 billion pesos.

Aside from the toll plaza, CCLEX has the following significant facilities and structure features: